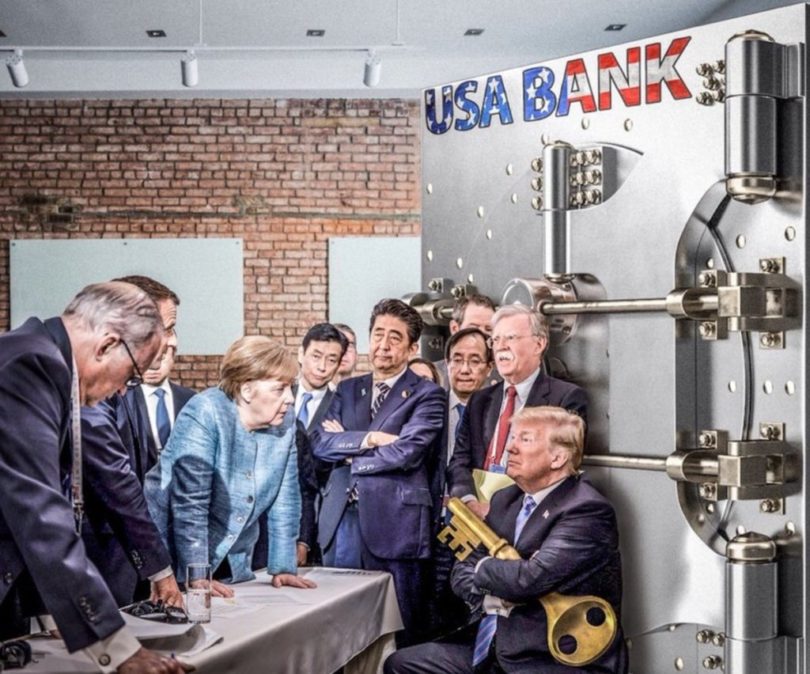 Leftists love to trot out Christine Lagarde as the pontificating elite to defend their multinational interests. Recently the former IMF leader was elected to take control of the European Central Bank. As a direct result, Ms. Lagarde is now taking an adverse position toward a strong U.S. economy and decrying the ‘America-First’ policies of President Trump that have removed the tentacles of global financial control.

If you follow trade, finance and the interests of the multinationals, this is actually quite funny. In this first brief interview segment Ms. Lagarde, has the elitist audacity to warn President Trump that lowering U.S. interest rates defeats the agenda of the EU. She doesn’t put it in those terms, but watch and we’ll explain:

Notice how Lagarde magnanimously claims that lowering interest rates when the U.S. economy is strong, and the U.S. unemployment rate is at historic lows, could lead to rising prices inside the U.S. Too damned funny; how very kind of the EU to be worried about U.S. consumers… (pro tip: they ain’t).

What she’s really worried about is the dynamic that President Trump has created that is crushing the globalists. Let’s expand.

The EU economy writ large is contracting, shrinking, due to a lack of investment. The EU has dropped their interest rates in a futile effort to stimulate internal investment… but it ain’t happening. The consequence of the EU lowering rates into negative territory is a weakened EU currency. Two things are happening:

#1) The EU currency dropping means any exports from the EU are less expensive. This is part of the reason for lowering the value of their currency, to keep an export dependent economy alive. However….

2) By dropping interest rates and driving down their own currency, the value of the dollar increases. This dynamic means EU banks actually purchase U.S. Treasuries for a return. [There is no return in the EU] And simultaneously this drives up the value of the dollar, making any U.S. imports of EU products cost less.

The combination of a weaker EU and a stronger dollar means the prices of the products we would import from the EU are lower. In essence, much like China, the U.S. is importing deflation from Europe.

Any U.S. import company that is not now renegotiating the prices of purchases is a fool. Now is the time for all U.S. companies to drive hard bargains from Asian and EU corporations who wish to sell goods into the U.S. From all current indicators these renegotiations for lower prices is happening both on the Chinese side and the European side.

The lower price of EU products means President Trump can apply greater tariff pressure on the EU and still not create inflation within the U.S. on the imported categories. This is the same outcome Trump’s ‘America-First’ policy is doing to China.

♦ Secondly, it is President Trump’s confrontation with China that has caused Beijing to slow down, and in some cases stop, their industrial purchases. The EU economy, specifically Germany, Italy and France, are dependent on purchases from China. As China stops buying stuff, the EU economy contracts. This is what is happening right now.

If you elevate your perspective what you realize is that every dollar the U.S. does not give to China means one dollar less that China has to purchase from the EU. Yes, that is correct… the U.S. $500 billion annual deficit with China is what allows Beijing to purchase industrial goods from Europe.

As President Trump resets the U.S. trade imbalance with China, he simultaneously diminishes the EU economy. THIS dynamic is what Christine Lagarde is really upset about.

So now we look at the second Lagarde “citizen of this world” soundbite (embedded in tweet) listen carefully:

In that soundbite “U.S. losing leadership” really means the America-First policies of President Trump means the U.S. is no longer spreading American wealth to the rest of the world.

♦ For more than three decades global economies have grown by removing wealth from the United States. The U.S. multinationals (Wall Street Corporations and pundits) have countered the economic arguments by claiming those global economies have purchased U.S. treasuries; but that means we trade our current wealth for future debt.

President Trump has reversed this dynamic. We are repatriating our national wealth through new trade policies and will pay for any incurred foreign debt by expanding our own economy and controlling our own destiny.

This is really what’s happening within the global economy that is causing massive reactions by those who were dependent on the status quo. The ‘America-First’ agenda uses the size and scale of the U.S. market to drive up U.S. wealth, and then stops the export of the dollars generated by making the U.S. the best place to retain investment.

You might remember back in July the IMF, which is euro-centric, increased the projected U.S. economic growth for 2019 to 2.6 percent. They then warned everyone else, that globally the world economy is in a position of weakening, or shrinking etc; and you won’t be surprised at the reason for the IMF negative global forecast. Of course it’s horrible Trump and his strategic trade reset that’s to blame. Grumble, grumble, grumble.

♦ In the bigger picture this is why President Trump is the most transformative economic President in the last 75 years. The post-WWII Marshall Plan was set up to allow Europe and Asia to place tariffs on exported American industrial products. Those tariffs were used by the EU and Japan to rebuild their infrastructure after a devastating war. However, there was never a built in mechanism to end the tariffs…. until President Trump came along and said: “it’s over”!

After about 20 years (+/-), say 1970 to be fair, the EU and Japan received enough money to rebuild. But instead of ending the one-way payment system, Asia and the EU sought to keep going and build their economies larger than the U.S. Additionally, the U.S. was carrying the cost of protecting the EU (via NATO) and Japan with our military. The EU and Japan didn’t need to spend a dime on defense because the U.S. essentially took over that role. But that military role, just like the tariffs, never ended. Again, until Trump.

The U.S. economy was the host for around 50 years of parasitic wealth exfiltration, or as most would say “distribution”. [Note I use the term *exfiltration* because it better highlights that American citizens paid higher prices for stuff, and paid higher taxes within the overall economic scheme, than was needed.]

President Trump is the first and only president who said: “enough”, and prior politicians who didn’t stop the process were “stupid” etc. etc. Obviously, he is 100% correct.

Fast forward to 2017 through today, and President Trump is now engaged in a massive and multidimensional effort to re-balance the entire global wealth dynamic. By putting tariffs on foreign imports he has counterbalanced the never-ending Marshal Plan trade program and demanded renegotiation(s).

President Trump’s goal is reciprocity; however, the EU and Asia, specifically China, don’t want to give up a decades-long multi-generational advantage. This is part of the fight.