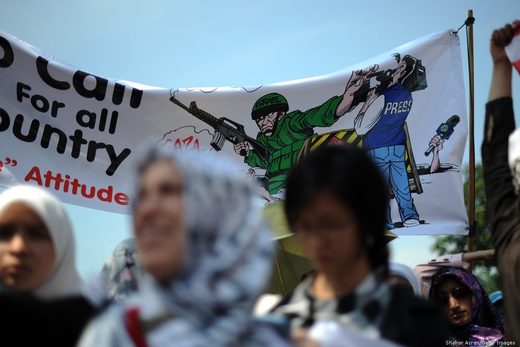 Malaysian prime minister, Mahathir Mohammad, announced on Friday that his country is to open an accredited embassy to Palestine, Anadolu News Agency reported.

“We know that Israel will not allow Malaysia to open an embassy in the Occupied Territory. As such, we will open the embassy in Jordan,” Mohammad announced.

Mohammad revealed that the embassy would be accredited to Palestine, and it would more freely facilitate the extension of aid to Palestinians.

Addressing the 18th summit of Non-Aligned Movement (NAM) in Azerbaijan, Mohammad criticised the silence of the international community for “doing nothing” against Israeli actions.

Leaders and representatives of at least 120 member countries of the NAM are meeting in Baku.

“I would also like to bring to this occasion the fate that awaits our poor Palestinian brothers. Palestine remains occupied by a brutal regime. This regime continues to expand illegal settlements on land that rightfully belongs to the Palestinians,” he stated.

Mohammad added “it is unfortunate that a world organisation set up by powerful nations now sees those very people ignoring the resolutions of that world body. Now, we see others doing the same.”

Meanwhile, he criticised Israel for its plans to annex parts of the West Bank, as well as claiming Jerusalem as its capital.

“Many western countries are supporting this move by relocating, or vowing to relocate, their embassies there. Malaysia does not agree with this,” he explained.

Mohammad called on NAM member countries that have relocated their Israeli embassies to Jerusalem, or are planning to do so, to reconsider their decision.