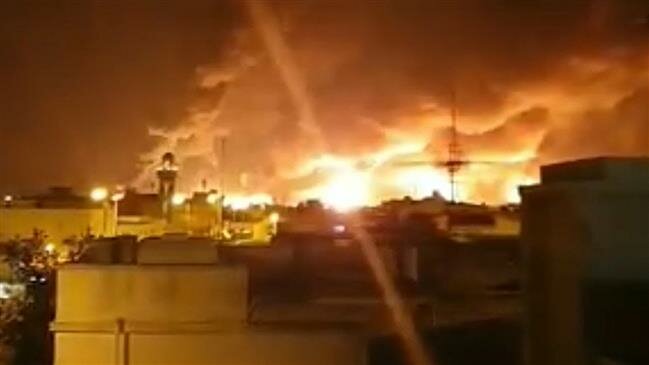 Yemen’s military has warned foreigners in Saudi Arabia to leave Aramco’s oil processing plants, saying they are still a target and can be attacked “at any moment.”

The warning came after Houthis and their allies in the Yemeni army deployed as many as 10 drones to bomb Abqaiq and Khurais oil facilities run by the Saudi state-owned oil company before dawn Saturday.

Spokesman for the Yemeni armed forces, General Yahya Sare’a, said in a tweet Monday that the attacks in the kingdom’s eastern region had been carried out by drones with normal and jet engines.

He said Saudi Arabia should stop its “aggression and blockade on Yemen,” or see the Yemeni army hit the kingdom “anywhere and anytime” it chooses.

Other Yemeni officials dismissed claims that the country is incapable of carrying out on its own the kind of attacks that targeted two plants at the heart of Saudi Arabia’s oil industry.

Mohammed al-Bukhaiti, a member of Yemen’s Supreme Political Council, pledged that Yemeni forces will continue to pound the Saudi oil industry until the kingdom ends its deadly war.

The unprecedented attack knocked out more than half of Saudi crude output, or 5% of global supply, prompting Saudi and US officials to claim without any evidence that it probably originated from Iraq or Iran.

Bukhaiti told Iran’s Tasnim news agency that blaming the attacks on other countries shows “cowardice” in facing up to the reality of Yemen’s military power.

“Saudi Arabia declared war against Yemen on the grounds that our missile inventory posed a threat to its security,” he said. “Today, we are surprised to see that when we hit Saudi oil wells, they exonerate Yemen from conducting these strikes and accuse others of doing them.”

“This is viewed as an own criminal decree of conviction. It also shows their cowardice,” Bukhaiti added.

US Secretary of State Michael Pompeo was quick to blame Iran for the brazen attacks, claiming there was no evidence the drones had originated from Yemen.

Bukhaiti mocked the proposition, saying Washington resorted to such rhetoric to hide the fact that their radars were simply incapable of tracking Yemeni drones.

“America and Saudi Arabia’s radars cannot intercept Yemeni aircraft. If they could intercept them, they would have shot them down,” he argued.

Bukhiati said the fact that Pompeo did not produce evidence to substantiate his claim showed they were “bankrupt” both politically and militarily.

Iranian Foreign Minister Mohammad Javad Zarif also responded to Pompeo, saying the United States had failed in its campaign of “maximum pressure” and was now “turning to ‘max deceit’.”

Bukhiati made it clear that the Houthis would only stop attacking Saudi Arabia once it abandons “serving US interests” and starts respecting the interests of its own people.

“Ending the war now is no longer a shared interest of Yemen and Saudi Arabia. Rather, it benefits Saudis more than it does Yemen because Yemen doesn’t have much to lose,” he said. “Yet we are witnessing Saudi Arabia’s stubbornness because it is the United States that decides for them.”

“These attacks will automatically stop when Saudi Arabia ends its aggression and lifts its blockade against Yemen,” he said. “These operations will only expand and target facilities that are more vital and more sensitive than oil facilities.”

Yemen’s air force also issued a statement on Sunday, denying reports that Iran and even Iraq might have played a role in the attack.

“We confirm that these operations were carried out from Yemeni territories and by the Yemeni Army and Popular Committees,” said Brigadier General Abdullah al-Jefri, head of the Yemeni air forces.

“Therefore, whatever is being said about Iran’s support for us or allegations that these attacks were carried out from inside Iraq or through Lebanon’s Hezbollah are absolutely wrong,” he said.

“Such statements and blind and fruitless accusations are unfathomable and meaningless,” he added.

The Iraqi cabinet said Sunday that claims about its territory being used as a base for the attacks held no value, stressing that the country would never become a platform to attack other countries.

“The Iraqi government will deal firmly against anyone who tries to violate the Constitution. It has formed a committee of the relevant Iraqi parties to follow up information and developments,” explained the Cabinet Office.

The statement also called on warring parties to stop hostilities, expressing concern that “escalation and military solutions would complicate the humanitarian and political situation, and threaten our common security as well as regional and international security.”