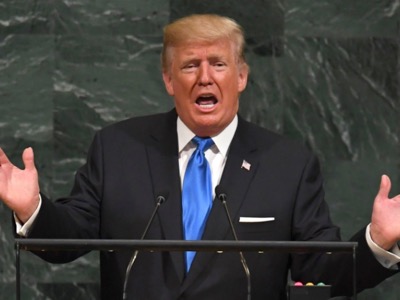 After two and a half years in power, President Donald Trump is about to impose his views on the Pentagon. The one who put an end to Daesh’s “Sunnistan” plan is to end the Rumsfeld / Cebrowski doctrine of destroying state structures in the wider Middle East. If it succeeds, peace will return to the region as well as to the Caribbean Basin. However, the peoples who have survived military imperialism will still have to fight for their economic sovereignty.

For two and a half years, the United States has pursued two contradictory and incompatible strategies [1].

It seems that President Donald Trump is about to impose his thoughts on his administration, still dominated by officials and military from the Bush and Obama eras, and to announce the consequences on September 19, at the 73rd Assembly United Nations General Assembly: Peace in Afghanistan, Iraq, Libya, Syria, Yemen, Venezuela and Nicaragua.

Announced during its election campaign in 2016, the transition from a bellicose logic of conquest to another, peaceful, economic hegemony is still not formally decided.

Even once recorded, such a turnaround will not happen in a day. And it will come with a price to pay.

Regarding the current main conflict, Syria, the principles of an agreement have been negotiated between the United States, Iran, Russia and Turkey.

The preparatory process for this agreement is still in its infancy. For the past two months, the Syrian Arab Army has been authorized to recapture the al-Qaeda-occupied Idleb governorate [6] and the United States has helped by bombing the headquarters of the terrorist organization [7]. Then, the United States began dismantling the fortification of pseudo-Kurdistan (“Rojava”) [8] while developing those of their illegal military bases, including Hassaké. For the moment, the economic part of the plan has not started. The United States has besieged Syria since the fall of 2017 and sanctioned foreign companies – with the exception of the Emirati – who dared to participate in the 61st International Damascus Fair (August 28-September 6, 2019). [9] The reconstruction of the country remains impossible.

Simultaneously, in the Caribbean Basin, negotiations began quietly in June 2019 between the United States and Venezuela [10]. While Washington still repeats that Nicolás Maduro’s re-election in May 2018 is null and void, there is no longer any question of diplomats denigrating Chavismo or “judging the dictator”, but offering a way out to “Constitutional president” [11]. The United States is prepared to abandon its plans to destroy state structures if they are involved in oil exploitation and trade.

It will be easy for pseudo-intellectuals to explain that the United States has led all these destabilizations and wars only for oil. But this theory does not account for what has happened for eighteen years. The Pentagon’s mission was to destroy the state structures of these regions. It did it in Afghanistan, Libya and Yemen, partly in Iraq and not at all in Syria. It is only today that the oil issue is back on the agenda.

The Trump / Pompeo strategy is a new calamity for the oil regions, but it is infinitely less damaging than that of Rumsfeld / Cebrowski which has devastated the broader Middle East for two decades with its tens of thousands of tortures and hundreds of thousands of murders.

[9] “Parameters and Principles of UN assistance in Syria”, by Jeffrey D. Feltman, Voltaire Network, 15 October 2017. “Russia denounces the diarchy at the heart of the UNO and the USA”, by Thierry Meyssan, Translation Pete Kimberley, Al-Watan (Syria) , Voltaire Network, 28 August 2018. “Russian comment on the US administration’s attempts to disrupt the Damascus International Fair”, Voltaire Network, 27 August 2019.