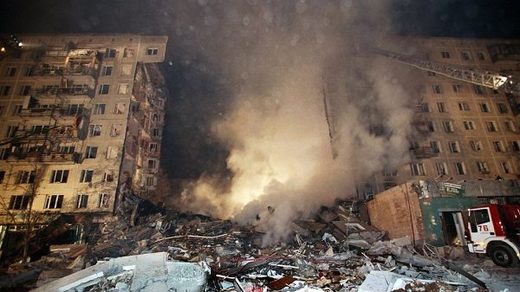 September 1999 was one of the most terrifying months in Russia’s modern history. In a span of less than two weeks, four separate bomb attacks rocked the country, and there seemed to be no end to this wave of random violence.

September 13, exactly 20 years ago, was the bloodiest day in a month that was full of grief and fear for Russians. Early in the morning, a powerful blast in the basement of an eight-story apartment building in Moscow leveled it to the ground, killing 124 people. Only seven survived. The explosion was later estimated to be the equivalent of 300kg of TNT.

The deaths and how they occurred was almost a carbon copy of what happened days prior, just six kilometers away. Explosives disguised as bags of sugar were smuggled into a rented apartment, and the detonation was timed for late night to maximize its lethality. Some 106 people were killed and almost 700 injured. In a macabre twist of fate, Russia was supposed to have national day of mourning for victims of that attack on September 13.

And that one was not even the first in the series. The initial attack happened in the city of Buynaksk in Russia’s southern Republic of Dagestan on September 4. A truck loaded with homemade explosives was parked near a house where families of Russian soldiers lived, and was set to blow up in the evening. Another truck bomb was found next to a hospital and was supposed to target survivors, but luckily that part of the plan was thwarted, preventing the death toll of 64 from escalating further.

The last grim strike in this streak of terror happened on September 16 in Volgodonsk, another city in southern Russia. Just like the two attacks in Moscow, it targeted random civilians. The casualty count was the smallest of the four, with 19 lives claimed.

There was little doubt about who was behind the spree of violence. By the time the bombs started going off, Russia had been fighting for months against jihadist groups in the south. Radical Islamists flourished in the lawlessness of Chechnya, which at the time was reigned by warlords, militants and bandits of all sorts, who were eager to expand their reign into the rest of the Caucasus region.

A massive incursion was launched from Chechnya in August into neighboring Dagestan, where the help of local militias was required to turn the tide of battle. The blast in Buynaksk was a clear message from the jihadists that defying them would put the loved ones of the military in the crosshairs.

Subsequent bombings brought the war to the doorstop of every Russian, whether in uniform or not. Investigations proved that the jihadists were indeed responsible. Some of the identified perpetrators were killed, while a dozen others were captured, tried and sentenced for their roles.

And Russians were terrorized. For weeks, people would organize night patrols around their homes, looking for anything or anyone suspicious, not trusting the police to keep them safe. Superintendents would run around checking if basements and attics were properly locked.

But Russians were also very angry. Later in September Vladimir Putin, who just traded the chair of a security chief to that of prime minister, announced that Russian warplanes had started bombing terrorist targets in the Chechen Republic. “If we find a [terrorist] in a water closet, we’ll waste them there,” he crudely joked. A ground operation followed within days.

Two decades later, the tragedies of 1999 are drifting into the realm of the dark pages of history. Three of the places where terrorists struck are now marked by memorials. A church was built on the site where the first Moscow house was reduced to rubble. Modeled after the Holy Trinity Monastery Church in Jordanville, New York, it’s a so-called “church on blood,” acting both as a house of worship and a memorial for those slain. The names of the victims are mentioned in prayers during daily services held there.