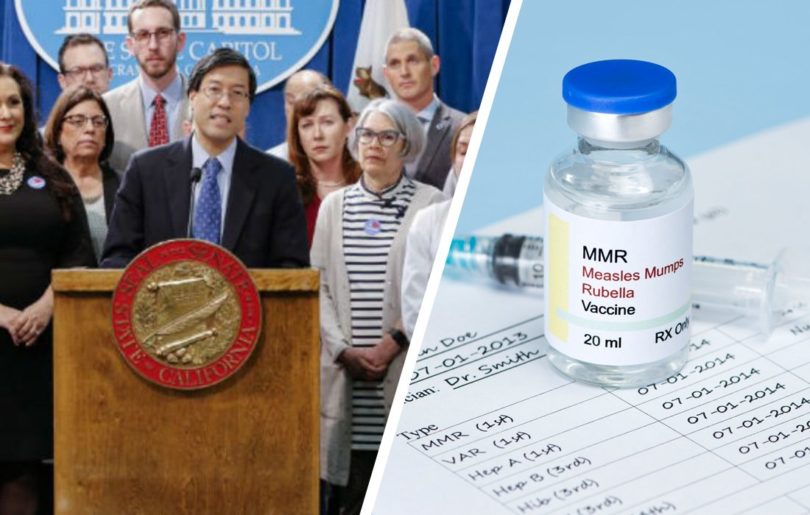 California has very strict compulsory vaccination laws for children in school, and as a result more parents are deciding to homeschool their children. The latest information regarding vaccines in California that’s making noise is Senate Bill 276 by Senator Richard Pan. The bill eliminated nearly all vaccine medical exemptions. Under this bill, politicians, not physicians, are in charge of deciding whether or not children may receive medical exemptions, which in turn would determine whether or not they can attend school.

This is, in many ways, insanity. And mainstream media isn’t helping. Take actress Jessica Biel, for example, who made an appearance with Robert F. Kennedy Jr. Instantaneously headlines popped up everywhere claiming that she was ‘anti-vax’ when that wasn’t the case, she is simply a supporter of medical freedom and freedom of choice. Mainstream media constantly uses terms like ‘anti-vax’ to label those who oppose bills like these, without ever addressing the real science and concerns that many parents have, some of which are listed below.

State public health officials must not have the power to override the judgment of private physicians. SB 276 inappropriately places the granting or withholding of medical vaccine exemptions for patients in the hands of state employees, rather than in the hands of private physicians who personally care for patients. Doctors must be permitted to evaluate patient susceptibility to vaccine injuries, taking into consideration a variety of factors that cannot be legislated. SB 276 forces healthcare professionals to adhere to exceptionally narrow vaccine contraindications, which have been defined by government appointed officials working for the CDC, a public health agency. Doctors are so severely scrutinized and challenged for granting medical vaccine exemptions that, with precious few exceptions, most are concerned for their licenses and are no longer willing to grant them. Doctors must have the latitude to evaluate their patients and to grant medical exemptions when indicated.

Below is a very informative statement from Robert F. Kennedy Jr.

Merck introduced its measles vaccine in 1963, claiming the vaccine would convey lifelong immunity equivalent to a natural infection, with health officials promising that 55% vaccine coverage would produce “herd immunity” sufficient to eradicate measles by 1967.

Leading scientists of the day, including the world’s preeminent bacteriologist, Sir Graham Wilsonand Harvard Virologist John Enders, who first isolated measles, warned against introducing a vaccine unless it provided lifelong immunity. Measles, they cautioned, would rebound with increased virulence and mortality as the vaccine forced the evolution of more virulent strains and shifted outbreaks away from children—biologically evolved to handle measles—to the elderly who could die from pneumonia, and young infants now unequipped with maternal immunity.

A 1984 Johns Hopkins University modeling study predicted that Merck’s population-wide experiment would increase measles outbreaks by 2050, (when the last generation subject to natural immunity died off,) compared to the pre-vaccine era. This is exactly what has happened. Merck’s vaccine, with a growing failure rate has been incapable of abolishing the disease. Vaccine failure has left millions of adult Californians effectively unvaccinated. And 79% of people affected by measles in this year’s California outbreak were adults.

When eradication predictably didn’t materialize and measles attacked fully-vaccinated populations, Merck simply moved the goalpost saying that herd immunity required 75% vaccination, then 85%, then 95%, then 98%. And now 99%. To distract the world’s citizens from its failed vaccine, Merck started blaming “anti-vaxxers.” (The Vaccine Safety Movement)

California’s bought or brain-dead lawmakers are proposing to “fix” Merck’s vaccine failure problem by punishing 4,000 vulnerable children with medical exemptions. In an act of legislative savagery, Democratic politicians propose to forcibly vaccinate children whose doctors have told them that a vaccine could kill or severely injure them. SB276 will not fix the measles outbreak or solve the problem of vaccine failure, it will only reward a corrupt company for a defective product.

Vaccines Aren’t Safe For Everyone

It’s no secret that vaccines are not completely safe for everyone, it’s clearly not a ‘one size fits all’ product, and that’s evident by the fact that nearly $4 billion has been paid out to families of vaccine injured children via the National Childhood Vaccine Injury Act (NCVIA). As astronomical as the monetary awards are, they’re even more alarming considering that only an estimated 1% of vaccine injuries are even reported to the Vaccine Adverse Events Reporting System (VAERS). If the numbers from VAERS are correct – only 1% of vaccine injuries are reported and only 1/3 of the petitions are compensated – then up to 99% of vaccine injuries go unreported and the families of the vast majority of people injured by vaccines are picking up the costs, once again, for vaccine makers’ flawed products. According to a MedAlerts search of the FDA Vaccine Adverse Event Reporting System (VAERS) database, as of 2/5/19, the cumulative raw count of adverse events from measles, mumps, and rubella vaccines alone was: 93,929 adverse events, 1,810 disabilities, 6,902 hospitalizations, and 463 deaths.

I’m just trying to make it clear that, again, vaccines are not safe for everybody. Furthermore, the NCVIA sounds like it has the best interests of this nation’s young citizens in mind, but actually serves a much different purpose. The NCVIA  sets limits on the liability of vaccine manufacturers. They don’t have to pay a dime, in most cases, if someone is injured as a result of a product they make. It comes out of taxpayers’ pockets, and this has been going on for more than two decades. The act completely protects pharmaceutical companies from any liability or responsibility for a vaccine product that caused or causes injury. They cannot get in trouble and they cannot be held responsible, which allows them to be completely careless with their products. A vaccine could kill multiple people and the company would not be held liable. It should really be called the pharmaceutical protection act.

Aluminum is another great example of vaccine safety concerns, in fact, it’s one of many. Here’s a detailed article I wrote that presents multiple studies as well as links to studies and a very informative interview with Dr. Christopher Exley, a Professor in Bioinorganic Chemistry at Keele University, who explains what happens to aluminum when it is injected via a vaccine.

These types of studies are never addressed or countered or even brought to light by the mainstream media. All they simply do is trigger complete silence, while ridicule and terms like ‘anti-vax’ and  ‘conspiracy theorist’ are constantly used.

The main motivation behind compulsory vaccine initiatives is “herd immunity.” The idea that the more people that are vaccinated, the more protection there will be for the whole. The public health establishment borrowed the herd immunity concept from pre-vaccine observations of natural disease outbreaks. Then, without any apparent supporting science, officials applied the concept to vaccinations, using it not only to justify mass vaccinations but to guilt-trip anyone objecting to the nation’s increasingly onerous vaccine mandates as well.

The mandatory measles vaccine initiatives are a great example, as measles outbreaks over the past couple of years have occurred in vaccinated individuals, which suggests a failing vaccine. In fact, highly vaccinated (measles) populations have had a history of measles outbreaks, and studies have also shown that vaccinated children could also be spreading/shedding the virus they’ve been vaccinated with. You can see multiple studies and examples that go into more detail in an article I previously published here.

An analysis in the Oregon Law Review by New York University (NYU) legal scholars Mary Holland and Chase E. Zachary (who also has a Princeton-conferred doctorate in chemistry), showed that 60 years of compulsory vaccine policies “have not attained herd immunity for any childhood disease.” It is time, they suggest, to cast aside coercion in favor of voluntary choice.

Herd immunity can’t exist unless vaccines are 100 percent safe. The idea that an unvaccinated child can pose danger to other children, especially children who are vaccinated, is completely false. If anything, the science showing that vaccinated individuals can shed their virus implies it’s the other way around.

Below is a thought provoking statement from Holland in Washington during the fight to stop mandatory measles vaccinations.

The various forms of vaccine failure not only make herd immunity impossible to achieve but also feed the occurrence of ‘vaccine-preventable illnesses’ in highly or even fully vaccinated populations. Again, I provide multiple links and evidence above that clearly show that vaccines are nowhere near as effective as they are marketed to be, as there are many instances of vaccines failing.

The idea that politicians can force children to be vaccinated, including those deemed to be in danger of severe adverse reactions, and strip them of their rights to attend public school is insane. Freedom of choice and medical freedom should always exist, especially with regards to vaccines. If parents want to vaccinate, fine, but parents who wish to not vaccinate their children for whatever reasons should always have the freedom to do so.