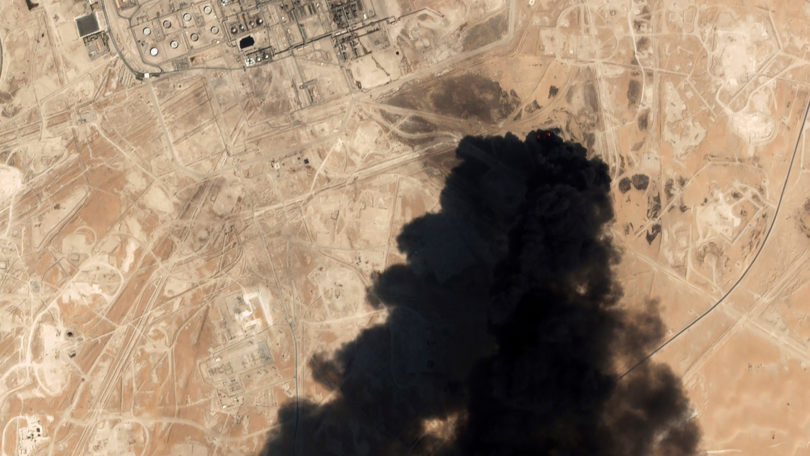 The crisis about the Yemeni drone and cruise missile attack on two Saudi oil installations is for now over.

The Saudis and the U.S. accuse Iran of being behind the “act of war” as Secretary of State Pompeo called it. The Saudis have bombed Yemen with U.S. made bombs since 2015. One wonders how Pompeo is calling that.

The Yemeni forces aligned with the Houthi Ansarallah do not deny that their drones and cruise missiles are copies of Iranian designs. But they insist that they are built in Yemen and fired from there.

President Trump will not launch a military attack against Iran. Neither will the Saudis or anyone else. Iran has deterred them by explaining that any attack on Iran will be responded to by waging all out war against the U.S. and its ‘allies’ around the Persian Gulf.

Trump sent Pompeo to Saudi Arabia to hold hands with the Saudi gangster family who call themselves royals. Pompeo of course tried to sell them more weapons. On his flight back he had an uncharacteristically dovish Q & A with reporters. Pompeo said:

I was here in an act of diplomacy. While the foreign minister of Iran is threatening all-out war and to fight to the last American, we’re here to build out a coalition aimed at achieving peace and a peaceful resolution to this. That’s my mission set, what President Trump certainly wants me to work to achieve, and I hope that the Islamic Republic of Iran sees it the same way. There’s no evidence of that from his statement, but I hope that that’s the case.

The crisis is over and we are back to waiting for the next round. A few days or weeks from now we will see another round of attacks on oil assets on the western side of the Persian Gulf. Iran, with the help of its friends, can play this game again and again and it will do so until the U.S. gives up and lifts the sanctions against that country.

The Houthi will continue to attack the Saudis until they end their war on Yemen and pay reparations.

As long as no U.S. forces get killed the U.S. will not hit back because Trump wants to be reelected. An all out war around the Persian Gulf would drive energy prices into the stratosphere and slump the global economy. His voters would not like that.

In our earlier pieces on the Abqaiq attack we said that the attacked crude oil stabilization plant in Abquaq had no air defense. Some diligent researchers have since found that there was a previously unknown Patriot air-defense unit in the area which was itself protected by several short range air-defense cannons:

Michael Duitsman @DuitsyWasHere – 7:02 UTC · Sep 18, 2019
On paper, the point air defenses at the Abqaiq oil processing facility are rather formidable… by 1995 standards, at least.
A battery of Shahine SAMs (French system from the early 1980’s)
3 or 4 anti-aircraft gun sections, each with 2 twin 35mm cannons and a fire control unit

But one Patriot system covers only 120° of the horizon. The attacking drones came from a western directions while Saudi Arabia’s enemies are to its east and south. The older Patriot 2 version the Saudis have is also not of much use against low flying drones and cruise missiles.

There is also the oddity that the Patriot unit’s radar system was shut off.

No patriot radars have been active in recent months (at least not consistently) in the vicinity of the plant, not in the short range required to detect low flying cruise missiles or drones. Closest installation is in Barhain.
(using Sentinel 1 CSAR sat for detection)

Satellites with synthetic-aperture radar can ‘see’ the radar of Patriot and other air-defense system. None was detected around Abqaiq.

The explanation for that is likely rather trivial. Colonel Pat Lang was stationed in Saudi Arabia as a military liaison officer. As he recently remarked:

Never underestimate the feckless laziness of the Saudis. In my experience they turn off all ATC and air defense systems that require manning or watch keeping when they find them inconvenient as on the weekend. IMO if Ansarallah did this they will do something similar soon to prove they are responsible.

Abqaiq was attacked on the night of Friday to Saturday. That is the weekend in Saudi Arabia.