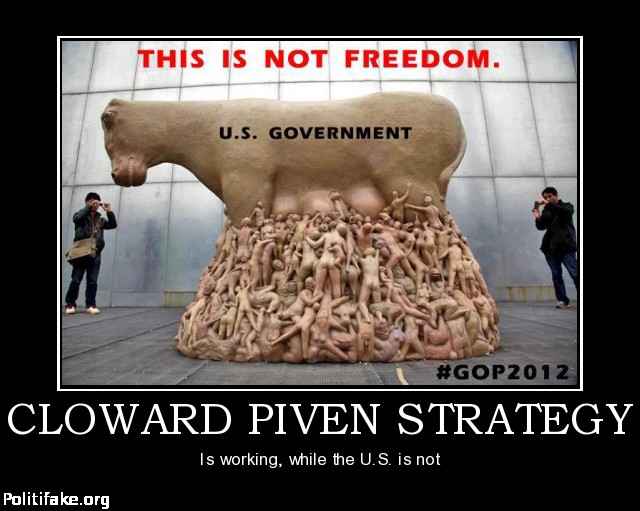 Anyone else notice the Cloward-Piven strategy popping up with increasing frequency? I certainly have and I’m not sure what it signifies. Briefly the C-P strategy was one developed by two Marxist sociologists (are there any other kind?) in the sixties with the aim of ‘bringing down the system’. This would be achieved primarily by overloading the welfare system until the Government could no longer make the payments. This would be followed by turmoil in the streets as the welfare parasites rioted, at which point a well-prepared cadre of left-wing extremists would seize power and implement a Communist dictatorship. “Cadres of aggressive organizers . . . from the civil rights movement and the churches, from militant low-income organizations like those formed by Saul Alinksy and other groups on the Left”. The authors whisper that the objective is ‘to end poverty once and for all’ but like all left-wing ideologues they couldn’t care less about ordinary people. They love The People but hate people.

I imagine that the plan received a cool reception when first published. I mean it wouldn’t have seemed very practical, would it? But considering what’s happened in the meantime it seems like an inspirational blueprint. Bear in mind that the strategy gelled elegantly with the rest of the Cultural Marxist nation-wrecking agenda (and is in many ways a derivative of the (problem / reaction / solution) Hegelian Dialectic). This includes mass immigration of Third World parasites, the undermining of the family with a consequent increase in welfare dependency, the fostering of a grievance / entitlement culture, the fanning of racial resentment, weakening personal accountability and the traditional sense of duty etc.
C-P identify many supporting initiatives to enable their strategy such as getting governments to become heavily involved in charities, either by financially supporting established charities and/or taking on the roles formerly performed by religious institutions, undermining faith in traditional institutions like law enforcement by, inter alia, sharply tilting the system in favour of defendants and to foster the belief that government deficits don’t matter.
If you consider all that’s gone down in the intervening time their strategy reads less like a theoretical fantasy and more like a blueprint for our NWO globalist overlords to destroy White nations. As Henry Ford said about The Protocols Of Zion ‘I’m making no comment on them. I just ask you to look at what’s been written and what has come to pass in the interim’. The plan seems close to fruition. Now all that’s needed is the spark to ignite End Game. How long more can governments, especially that of the USA, continue to spend more than they earn? How long more will native Whites put up with the abusive behaviour and parasitism of our minorities?
I don’t know. But we should read all of this in the light of the American Government’s frantic attempts to disarm its White citizens – and that’s what ‘gun control’ all about – while arming their own forces to the teeth. Many people have a sense that something is going terribly wrong with their societies but are unable to connect the dots.