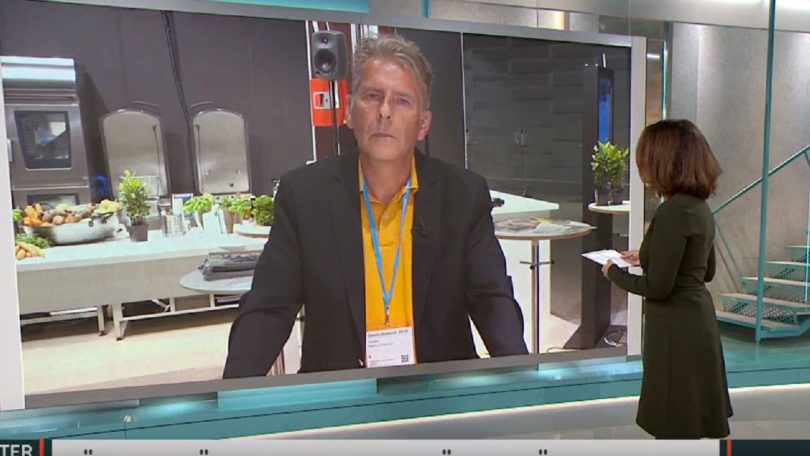 Behavioral scientist Magnus Soderlund suggested that cannibalism was an answer to climate change. It’s another example of mass media rationalizing cannibalism to the masses.

The Stockholm fair recently held a “Gastro Summit” event which discussed the “future of food”. And the future of food sounds terrible. Indeed, the summit featured a seminar led by Stockholm School of Economics professor Magnus Soderlund titled “Can You Imagine Eating Human Flesh?” where cannibalism was promoted to fight climate change, greenhouse emissions, and to encourage sustainability. Some of the topics addressed during the seminar were “Is Cannibalism the solution to food sustainability in the future?” and “Are we humans too selfish to live sustainably?”

On the Swedish television channel TV4, Soderlund stated that climate change will ultimately force people to “try foods they currently wouldn’t think of eating” such as pets, insects, and human flesh. To truly take on the effects of climate change, Soderlund states that we must “awake the idea” of eating human flesh and that it should be discussed as an option in the future.

While he believes that cannibalism is the “future of food”, he is aware that work needs to be done to address the “widespread taboo” against cannibalism and the “conservative attitudes” of the masses.

Soderlund believes that people are not cannibals due to “selfishness”. However, as an expert in behavior, he thinks that people can ultimately be “tricked” into “making the right decisions”. According to him, if people were gradually be exposed to cannibalism, the idea could become mainstream.

The scientist nuanced that he was not advocating “all-out cannibalism”, but simply the eating people that are already dead.

When asked if he would eat human flesh, he answered that he would be willing to at least taste it.

Soderlund plans to lecture more on the topic in the future. He is also looking to promote the most bone-chilling term in human history: “Mannisko-kötts branschen”. That means “the human flesh industry”.

The “cannibal agenda” has been identified some years ago on The Vigilant Citizen and it keeps getting more obvious. Yes, as absurd as this might sound, there is a clear and blatant push in mass media to normalize cannibalism to the masses. Using journalists, scientists, the global warming scare and, of course, the entertainment industry, the idea of eating human flesh is rationalized and even glamorized across all platforms owned by the elite. Here are some examples.

In the above tweet, UK biologist Richard Dawkins asks if we can overcome our “taboo against cannibalism”. The same question is asked in a recent Newsweek article.

While the article does not fully endorse cannibalism, it opens the door to rationalizing the concept:

“We suspect that we could adapt to human flesh if need be. Many people develop disgust for all kinds of meat, while morticians and surgeons quickly adapt to the initially difficult experience of handling dead bodies. Our ongoing research with butchers in England suggests that they easily adapt to working with animal parts that the average consumer finds quite disgusting.”

The entertainment industry is also being utilized to “plant the seeds” of cannibalism in the consciousness of the masses. For instance, in the Netflix series Chilling Adventures of Sabrina, the concept of cannibalism is playfully added to the story on numerous occasions.


The idea of cannibalism is also at the very core of another Netflix series: Santa Clarita Diet.

An Obsession of the Occult Elite

If the case of Jeffrey Epstein proved that the occult elite has a sick obsession with pedophilia, we can easily prove that it is also heavily bent on cannibalism.

If these people partake in “mock cannibalism” in their public events, God knows what they do behind closed doors.

In 2015, a Politico article titled Inside Hillary’s campaign headquarters showed a rather disturbing painting.

On the wall in his office at Hillary Clinton’s Brooklyn headquarters, campaign chairman John Podesta has an oil painting on loan from his lobbyist brother, who is an avid art collector. The image shows two men hunched over a dining room table, bearing knives and forks. On the table lays a man in a suit, who looks vaguely like Podesta. “It’s better to be the guy with the fork,” Podesta quips to his colleagues, if they ask about the image, “than the guy on the table.”

In conclusion, the idea of cannibalism is being promoted to the masses using the environment and climate change. However, the true reason behind this mass media push is much darker: It is about normalizing yet another sickness of the occult elite in a constant effort to push the masses into everything that is toxic to the mind, body, and soul.

P.S. If you appreciated this article, please consider showing your support through a small monthly donation on Patreon. If you prefer, you can also make a one-time donation here. Thank you.