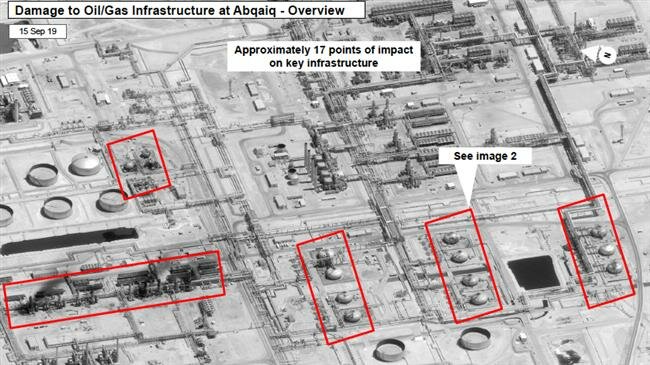 An informed Saudi source says the damages inflicted on the Aramco oil facilities in the recent Yemeni drone attacks are so massive that it is not clear when the country’s oil output can return to normal.

Attacks by 10 Yemeni drones on Saudi Arabia’s key oil facilities in Abqaiq and Khurais have shut down about 50 percent of the kingdom’s crude and gas production, cutting the state oil giant’s crude oil supply by around 5.7 million barrels per day.

An oil industry source briefed on the developments said on Sunday it is unclear how long the oil production shutdown will continue, as it is impossible to fix the “big” damages overnight.

Aramco has given no timeline for output resumption. However, a source close to the matter told Reuters the return to full oil capacity could take “weeks, not days”.

Another source briefed on the developments said the kingdom’s oil exports would continue to run as normal this week thanks to large storage in the country.

High-resolution satellite photos of the damaged facilities “declassified” by the US administration on Sunday show the drone attacks have hit at least 19 points with great precision.

A senior US official, asked not to be named, has claimed that evidence shows the launch area was west-northwest of the targets – the direction of Iran and Iraq – not south from Yemen.

The official has also quoted Saudi officials as saying that there are signs that cruise missiles were used in the attack.

This comes as Yemen has clearly stated it used 10 drones for Saturday’s operation, which was one of their largest retaliatory attacks ever inside the kingdom.

PressTV-Saudi oil output halved after Yemeni raids; US blames IranYemeni drone strikes on key Saudi oil facilities wipe out half of the kingdom’s crude and gas production power, with the US rushing to blame Iran.

Earlier in the day, Tehran dismissed the US’ claim of Iranian involvement in the drone attacks, saying “futile allegations and blind statements as such are incomprehensible and meaningless within the framework of diplomacy.”

Foreign Ministry spokesman Abbas Mousavi said such remarks “seem more like a plot being hatched by secret and intelligence organizations aimed at tarnishing a country’s image and setting the stage for future actions.”

He also criticized Saudi Arabia for fueling the flames of war in the region by committing various war crimes in Yemen for about five years, and hailed Yemen for putting up resistance in the face of the aggression.

PressTV-Iran rejects US ‘lies’ about Yemen raids on Saudi oil sitesTehran dismisses Washington’s claim of involvement in the recent Yemeni drone attacks on Saudi oil facilities, saying the accusation is part of a new campaign of deceit.

Iraq has also denied reports alleging that the country was the site from where Yemeni drones were launched to attack Saudi oil installations.

The statement came from Iraqi Prime Minister Adil Abdul-Mahdi’s office on Sunday. It said Iraq would act “decisively” if anyone tried to use its territory to attack other countries, AP reported.