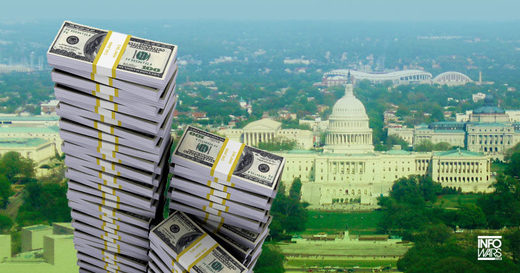 Senator Rand Paul is waging battle against waste. In his latest ‘waste report’, the Senator reveals how the government is adding to the $22 trillion national debt by subsidizing all manner of pointless activities, including $48 billion in improper Medicare and Medicaid payments.

All in all, Senator Paul totaled up $50 BILLION in wasted dollars, and he could have found a lot more had he scratched beneath the surface.

Some of the more bizarre things the government is wasting money on include the State Department spending $100,000 in subsidies for the Pakistani film industry.

The money will reportedly go to teach ‘aspiring filmmakers’ how to write screenplays, with a particular focus on themes of “strength in diversity” and “women’s empowerment”.

Why does this help America? No one really knows. Best guess is that its some sort of odd virtue signal on a grand scale. ‘Look at America helping these poor brown people make better films’.

The National Science Foundation, a government branch, also spent close to $500,000 studying the difference between frog mating calls in the city and in the forests in Panama. The frogs are not even an endangered species, they just did the study for fun.

It found that city frogs “call at a higher rate”. Good to know. I’m sure Americans will gladly hand over another half a million. Lets see how many frogs have turned gay this time, perhaps?

The government also spent a whopping $10 million on Peru’s version of the ‘Green New Deal’, with the US Agency for International Development committing the money “to develop new and innovative alliances with the private sector that advance environmentally-friendly economic development (i.e. green growth) in Peru.”

Helping out Peruvian gardeners has zero benefit for taxpaying Americans.

Other waste includes $2 million to “promote democracy” in Tunisia. The report notes that the US State Department has spent more than $1.4 billion on such efforts since 2011 when things went to shit in the country.

Why is it working Americans’ responsibility to fix a failed nation in Africa when their own infrastructure is crumbling?

Perhaps the most amusing example is the much beloved Department of Homeland Security having spent more than $2.1 billion on an effort to transform an abandoned DC mental hospital into its new HQ, with the project no where near completion.

There are a slew of memes to be created there.