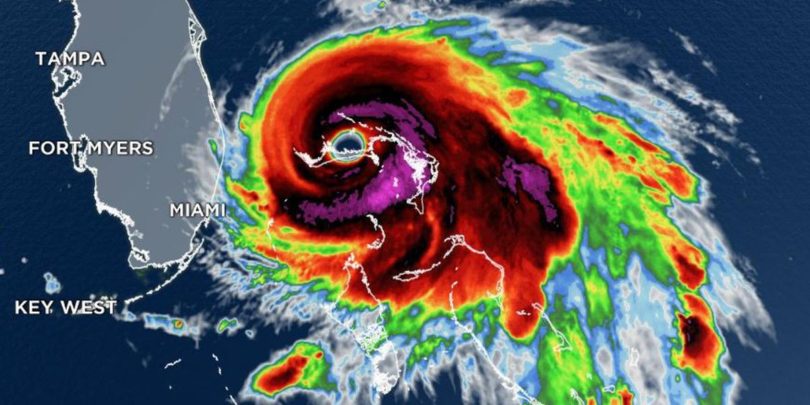 The Bahamas sacrificed themselves so the whole world would wake up to the new normal of weaponized weather.

What else can be said after viewing the photo above?!

It’s really false flag weather terrorism because geoengineers who manufacture and manipulate these superstorms do so with the intention of blaming them on Mother Nature.

Clearly, Operation Dorian Devastation was carried out by the New World Orderglobalist cabal in order to terrorize, traumatize and totally trash The Bahamas.

And yet this mega-hurricane is far from over.

But why The Bahamas?

Predatory capitalism is now in the final phase of its life cycle.

At this advanced phase of self-destruction, the world is witnessing the snake of predatory capitalism eating its own head.

The power elite who reside at the very top of the planetary food chain have developed appetites that are both voracious and insatiable.

As such, they will steal anything that is worthy of being stolen.

Toward that end, land, natural resources and water bodies/courses are top on their list of desired items.  Beautiful islands and strategically located land are especially high on that highly coveted list.

The Bahamas represent a cluster of quite pristine islands — over 700 — that the British colonized in 1718.   That British crown colony then became “an independent Commonwealth realm in 1973 with Elizabeth II as its queen”.[1]

In terms of gross domestic product per capita, the Bahamas is one of the richest countries in the Americas (following the United States and Canada), with an economy based on tourism and offshore finance.[1]

Needless to say, there’s an epic war going on between different factions who sit at the peak of the pinnacle of the pyramid of world power (PPPP).

Where it used to be a monolithic bloc of ruling elitists, there is now trouble in paradise.  Each faction within the NWO globalist cabal has their own agenda, some of which diverge from the master plan.

It’s critical for patriot movements around the globe to understand
that every major political movement occupies a serious seat at the
PPPP table either directly or by representation.

Only with this crucial understanding will populations everywhere be able to throw off the yoke of imperialism that masks itself as both communism and fascism, globalism and nationalism, marxism and capitalism, socialism and libertarianism.  Each of these “isms” is effectively used to divide and conquer the world community of nations on a daily basis.

Back to Operation Dorian Devastation

This complex black operation also doubles as a global psyop, the intention of which is to corral every nation on Earth into the pen of docile compliance.

What head of state is not watching Dorian lay waste to the once pristine and beautiful Bahama islands?

Which government is not witnessing the wholesale destruction of a national economy, infrastructure and society?

While the psyop component has various messages, the main one is this: Any nation or leader who leaves the reservation of political correctness will be targets with highly destructive and deadly weaponized weather.

Don’t even think about stepping off the reservation.  Those who do, do so on pain of death … … … or worse.

Now that Grand Bahama island has been made the site of an unparalleled terrorist crime scene, the rest of the world will never forget the utter devastation.  Every leader and citizen of every country now knows they can also become the victim of this type of weather warfare.  Even landlocked nations can be targeted with deluges and droughts, floods and wildfires, tornadoes and microbursts, blizzards and hailstorms, mudslides and sinkholes.

The Powers That Be have traditionally utilized two primary ways to forcibly move indigenous peoples off their ancestral lands.

War, as in armed conflict and military terrorism, was their preferred way; however, weather warfare is now becoming more common.

Both Agenda 21 and the 2030 Agenda for Sustainable Development are essential overarching U.N. nation-busting agenda that the globalists implement every week of the year.

The key piece of that stealthy agenda is the creation of special environmental corridors and greenspaces that are really the future enclaves reserved for the wealthy elites.

The Bahamas have always been such a coveted haven only now there is a war taking place among the very richest among the 1%.  As follows:

Every person on planet Earth is now vulnerable to this type of false flag weather terrorism and climate warfare.

The Bahamas, it could be said in view of this ongoing and shocking calamity, sacrificed themselves so the whole world would wake up to the new normal of weaponized weather.

What will the world community of nations do in the face of this constant threat?

How will people everywhere confront the globalists and their geoengineer terrorists?

When will this multi-decade crime wave be terminated, once and for all?

We the People can begin by widely circulating this important post: “An Open Letter to the Chemtrail Deniers and Global Warming Stalwarts“.

Truly, it’s now an existential imperative that every inhabitant of this blue orb comprehends the enormity and profundity of the information contained in the following exposé.