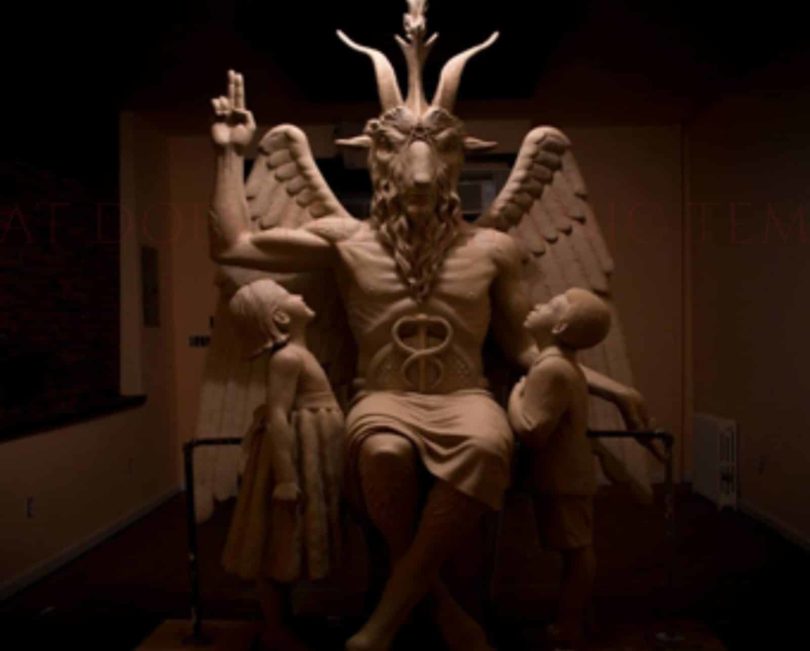 (we were dared to publish this)

The aftermath of World War II, and the defeat of the occultist powers, Germany and Japan, by Russia and the West, is not an untold story, just one subject to military secrecy.

The occultist societies that drove those surrounding Hitler and the Japanese emperor were nothing new.  Occultism, witchcraft, communing with entities such as jinns and demons is very much a part of Christianity, Islam and Judaism.

In addition, Hinduism and Buddhism are wrought with references to such entities.

The question we will be asking ourselves here is whether these beliefs, a less public but real part of our major religions today, often “closeted” as exorcism is within the Catholic Church, represent a valid expression of non-ordinary physics, another term for “magic,” or are the thousands of years of such practices entirely delusional?

We will be looking at this path today as the secret societies John Kennedy warned the United States of in his address at the Waldorf Astoria Hotel in New York on April 27, 1961, are all, in fact, based on occult ritual and represent, even among the most innocent sounding groups, at some level, attempts to commune with “the old gods.”

One reason, and there are many, that this subject is topical is that we have received confirmations that occultist practices within the US military have become common since the end of the Vietnam War.

Occultist organizations have been discovered, initially at The Presidio in the 1980s, where first dozens, then hundreds of officers were recruited and took part in rituals outlined by Karl Maria Wiligut for the German SS.

Our sources tell us that the failures of Vietnam led the American military, which by the 1980s had become institutionally corrupt and almost pitiable, to align themselves with occultists that had taken control of the Defense Intelligence Agency.

Almost all that is reported of such efforts and the legacy that has grown rather than diminished of these efforts is deeply veiled.  After all, what are secret societies without secrecy?

The greatest war in history was fought against powers now demonized on an almost daily basis for their unprecedented evil, murder on an unimaginable scale and more.  Germany and Japan employed practices the civilized world had believed were relegated to the dark ages, particularly considering the Geneva conferences after that other world war, the one “to end all wars.”

We know this, both German and Japanese leaders practiced occultism. In Germany this is better documented than in Japan and now portrayed in films such as Indiana Jones and the Temple of Doom and the Wolfenstein series of video games.

The basis of these efforts is in the very real efforts by Germany under Himmler and others to commune with what they deemed “the old gods” using massive human sacrifice that some allege may have led to the deaths of millions, Jews, Russian prisoners of war, other targeted groups, in a blood frenzy to gain corporeal power through the use of occult rituals.

As portrayed in books and films, we also know the United States was aware of this effort and, at the end of the war, sent teams to not only capture German scientists but, on a secondary level, exploit what they deemed “occult breakthroughs” that expanded scientific capability in ways not imagined.

The public knows about the advanced German planes, stealth technology, swept wing jets, workable designs for intercontinental ballistic missiles and, as the world is well aware, it was German science that took the United States to the moon in 1969.

What is not known by the public is that other projects the newly formed Department of Defense took on after the war, based on German occultism, remote viewing, anti-gravity vehicles and rumors of secret space programs, are still suppressed.

On occasion, occult based 3rd Reich projects enter the public domain though are delisted by Google and available only to select researchers.  In order to gather such information, it was necessary to access the libraries of the United States Department of Energy and the University of California’s Los Alamos facility.  These organizations design America’s nuclear weapons but work on “other projects” as well.

We are told that German breakthroughs tied to occultism, and doubt in such statements is always welcome, led to studies of gravitation in the 1950s by Piekara and Kielich that simply discarded Newtonian physics out of hand.

They asserted that gravity is an expression of circularly polarized electromagnetic radiation (typically photons), which was later verified at Harvard by Pershan, Van der Ziel, Malmstrom and Shen.

Suddenly, not only are so many ideas from science fiction a reality, such as Star Trek’s transporter and “tractor beams,” but in real application, matter can also be transmuted, potentially lead to gold, but more importantly, fissile material maybe altered or enhanced.

From Veterans Today Science Editor, and Jeff Smith, of the IAEA (a particle physicist):

“According to Maxwell a static electron has no magnetic field of its own and when rotated about its axis it will not produce one. However, when an electron is accelerated in a given direction it creates a line of force. This line of force is magnetic in nature and can then be deflected by external magnetic fields such as in a cathode ray tube.

Now when the electron is spun up into a closed circular path it becomes a dipole bar magnet with both a north and south pole. This so-called magnetic dipole is what we call electromagnetic radiation or what Einstein calls a Photon – I.E. light. At longer wavelengths it is just simply called radio waves, micro waves or just simply a transverse electromagnetic wave.”

Why the science lesson?

First of all, this is “giant leap” postwar physics that would have and certainly should have made a number of things possible, certainly production of electric power at no cost and a mind-boggling capability of simply eliminating the weight of things like planes or automobiles.

Then, however, the hydrocarbon-based economy would break instantly, never to return and with that and other advances, an end to hunger and thirst and eventually the need for money itself.

There would be nothing to fight for.

Here is the “however.”

It is asserted that powerful elites who belong to the occultist groups Kennedy warned of, groups we are seeing now on rare occasion despite their power to hide in the shadows, not only suppress technology but practice rituals that embrace sacrifice, human or otherwise.

Are the Bilderbergs, Skull and Bones, Bohemian Grove group, St. Hubertus, Opus Dei and others among these as conspiracy theorists assert?  When one looks at the origin of the term “conspiracy theorist,” traced back to the CIA and their attempt to discredit those who stumble on their “dark programs,” the validity of such questions gains in stature.

When US Supreme Court justice Antonin Scalia died in 2016, his body was found at a remote facility where a secret society held invocation rituals wearing robes and demonic masks.

Trails from the 50,000 square foot “Eyes Wide Shut” hunting lodge lead across the desert to remote illegal “ratlines” into Mexico.  For what reason, none but a few will ever know.

Things We Have Seen

The one subject we look at today as having potentially occultist roots, that being gravity, is only one of many.  We know the US Army still operates “remote viewing” teams and we have traced the origin of these groups to commands such as The Presidio in San Francisco where the US Army’s most elite command was deeply infiltrated by occultist under what still exists as the Temple of Set (Satan) founded by Colonel Michael Aquino, founder of many Army programs related to what is loosely termed “psychological warfare.”

We also know that the commands where these officers serve have long histories of mass institutional child abuse, not just the Presidio but, in particular, at West Point, the military academy of the US Army.

The investigations are in the public record, greatly censored, the numbers of the real abused downgraded from hundreds to a few, but not just “institutional” but “ritualized” child abuse has long been tied to the US Army beginning around 1984 at the time the US Army began exploring occultism as a form of warfare, taking the same path as Hitler and Himmler so many years before.

A “laundered” and heavily redacted comic version of such programs were exposed to the public in the film Men Who Stare at Goats starring George Clooney of “White Helmets” fame.

This one project, called Operation Stargate, was commanded by General Albert Stubblebein, who I have spoken with several times. Do remember that it was General Stubblebein, former head of US Army Intelligence, who reported the incident at the Pentagon on 9/11 as a missile attack.

The Academies and the Occult

Typically, occults have learned to hide in plain sight.  In the service academies for the military, Church of Set priests, Satanic priests, administered to their flock as “Pentecostals,” a fringe Christian subgroup normally scorned for its dramatic practices which can include poisonous snakes and orgasmic rituals.

Similarly, hiding inside the military as well, that provided plenty of cover for practices such as ritual child abuse as parents of victims were either transferred to the ends of the earth when they complained, and the US has bases in places few would imagine, or allowed to resign with no pension or benefits.

Parents who came forward at Presidio, West Point and other bases were silenced while records of the events were expunged by incinerating the files, according to an eyewitness.

Correct or not, and a truth is a truth, no matter how false, if it is generally believed, many top US commanders had learned to resent Christianity as the Romans had, a “slave religion,” not for “warriors,” as Pentagon “desk jockeys” think of themselves.

Colonel Aquino’s Church of Set with its blood sacrifices and warrior “cultism” appealed to the vanity of a military besotted with Vietnam “non-combat” veterans and those who chose the “volunteer” military because of the massive pay increases instituted under Reagan in particular.  Military salaries increased tenfold in many cases.

The other issue was “help from the darkside” in case of armed conflict.  Occultists are true believers, often hiding behind the term “psychological warfare” when they are actually practicing ritual incantations intended to harness what they believe are unearthly powers.

The worst of it is that leaders at the Pentagon genuinely admired the Axis powers in World War II and, to an extent, emulated their methodologies, mass murder, germ warfare and, strangest of all, seeking contact with “old gods” and offworld entities as potential allies, not for the United States, but to elevate them personally and enslave humanity.

As a closing note, we often expect claims that every time the US uses a drone somewhere, it will always be a funeral or wedding that is hit and the victims, rather than jihadists, will always be innocent children.

Such is the nature of propaganda, and everyone does this, most recently with greatest success, the White Helmets who twice duped President Trump into attacks on Syria albeit highly unsuccessful.

As for the American drone attacks, controlled from bases near Las Vegas or in Southern Arizona, such as Fort Huachuca, there is considerable correlation between drone operations that are alleged to have butchered tens of thousands of civilians and bases where Temple of Set commanders attached to Defense Intelligence Agency and Psychological Warfare commands reside.