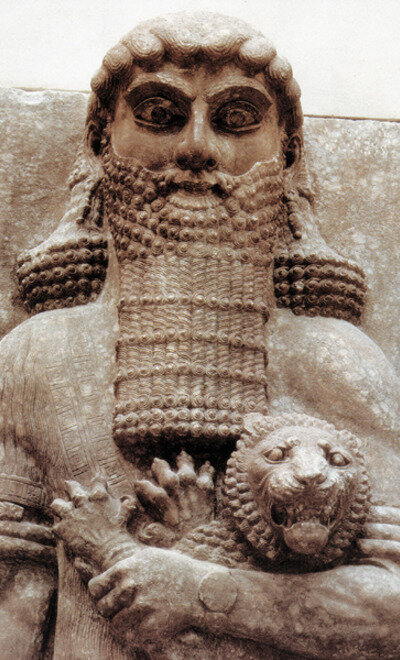 “There were giants in the earth in those days; and also after that, when the sons of God came in unto the daughters of men, and they bare children to them, the same became mighty men which were of old, men of renown.” Genesis 6:4

The underlying current of world history
is the war between Homo Sapiens, led by the Logos and his Prophets, and the Giants, the Nephilim, the sons and grandchildren of the Fallen Angels.

There is every reason to believe that Cabalistsare channeling these demons, acquiring knowledgeand power from them.

Anthony Migchels is the founder of De Florijn, the first fully fledged interest-free, privately operated currency in the World.
Migchels’ Disclaimer: While I’m incredibly grateful for, and humbled by the Spirit’s offer of friendship, I’m not a Bible believer or a member of any denomination. I have no desire or need to prove the Bible correct. I’m a mere truth-seeker, having come to the conclusion that the Bible and associated texts are right on the money in these matters. The above is not intended as ‘proof’, it is just a very short introduction to the narrative that has been evolving over the last few decades.

Yes, with modern eyes, this brazen, clearly genocidal attack on the Bronze Age Empires seems criminal.
But the war was not against Homo Sapiens. There were Giants on the Earth in those days, and they were the offspring of the Sons of God. They were evil, and the underlying current of world history is the war between Homo Sapiens, led by the Logos and his Prophets, and the Giants, the Nephilim, the sons and grandchildren of the Fallen Angels.
They had not all been destroyed in the Flood, and Civilization was restarted by them. A famous example is Gilgamesh, the leader and founder of the Sumerian Civilization. He must have been at least three times taller, and ten times heavier than normal men. Above he is seen in one of the famous sculptures his contemporaries left. That cute little feline pet he’s holding, is a 300 pound male lion.
When Moses sent scouts into Canaan, they came back and reported: “And there we saw the giants, the sons of Anak, which come of the giants: and we were in our own sight as grasshoppers, and so we were in their sight.” (Numbers 13:33).
These Giants were the men of renown that have been passed on in ‘myths’ and ‘legends’: Achilles, Hercules, but also monstrous miscegenations, as for instance the Minotaur, the monster of the Minoan Labyrinth, which seems to have been half Bull, half Man.

They were not just enormously big and strong, but also unimaginably intelligent: Gilgamesh himself must have had a massive cranium, just look at his head. A five or ten litre brain. Their mental powers must have been quite something. And this explains the ‘unexplainable’ high tech that is associated with all the Megaliths of the lost Civilizations that preceded ours. The builders of these structures had very advanced knowledge about engineering, astronomy, physics, geography, tool making, probably in many ways even more advanced than we are today.
There is an enormous, longstanding, and worldwide effort by the occult hierarchy to suppress all evidence of the giants and the remains of their civilization(s). But there are countless archaeological finds, and texts and oral traditions of basically every culture in the World.
These beings were involved in all sorts of heinous practices: demonology, human, and child sacrifice. The Giants were also eaters of human flesh. It’s not cannibalism: they really are a different species. To them, we are mere game.
And these were the enemies of God and his Chosen People, Israel.
THE JEWS
The Jews are not Israel, the House of Judah is only of the twelve tribes, and in John 8, Jesus clearly and directly accuses them of being of Abraham’s seed in the flesh, but having utterly betrayed Abraham’s God in the Spirit.

Religious Jews are fiercely against Zionism, and accept that God had ended his covenant with them, due to their disobedience, losing their rights to Canaan.
What happened? After 1177 BC, which is the date of the Bronze Age Collapse in the official timeline, Israel was supreme in Canaan and vicinity. But they started degenerating, under the influence of the Nephilim. Jeremiah accuses Israel of worshiping the Gods of the Nephilim, Baal, Moloch, etc.
Later, in the mid sixth century BC, the First Temple was destroyed and the Tribes of Israel were exiled to Babylon.
Babylon was a successor empire of Sumer, and it was also the place where Nimrod, another major Nephilim figure, built his Tower. It seems clear that the Jews were instructed in the evil occult knowledge of the Nephilim. This is now known as the Kabbalah.
Outright demonology is part and parcel of it. The texts relate how the Nephilim souls are refused access to Heaven, and are condemned to remain bound to the Earthly realm, without having bodies. They exist in some sort of parallel dimension.
There is every reason to believe that our current owners are channeling these demons, acquiring knowledge and power from them.
Sickeningly, the Jews are pretending to be Israel, God’s Chosen People, and they are pretending that the rest of us are basically Nephilim. When the Old Testament speaks of the Gentiles, they mean the Nephilim off spring. The current Jewish playbook is pretending we are the soulless monsters like those that were destroyed by Moses. And that they have the right to use the same methods against us, as Moses used against the Giants.
While they themselves are in fact the tools of these Fallen Angels.
A good example is Old Testament Usury prohibition: God forbids lending at interest to his People, but NOT to his enemies, the Nephilim offspring.
It’s a gigantic projection and identity theft.
It also puts the Jewish resentment against Jesus in a very different and relevant light. Of course they could not accept him: he was denying their ‘right’ to enslave and destroy everybody for the Fallen Angels, as they would be doing in the centuries after their destruction by the Romans.
CONCLUSION
The main undercurrent of our history is the war between God and his People, Homo Sapiens, and the Fallen Angels and their half human, half Nephilim offspring.
There were a number of key events:
1. The Flood, the first attempt by God to cleanse the Earth, killing most of the massive Giants and their offspring, but some of the evil seed survived.
2. In the Bronze Age Collapse, Israel was disciplined and instructed to be God’s Chosen People, getting them to attack and destroy the Nephilim Empires that arose after the Flood.
3. Jesus, who did not attack the Roman Empire, a monstrous tyranny of Usury and Genocide, but a seemingly small and inconsequential semi-autonomous province of the Empire held by the last known remnants of the Twelve Tribes, the House of Judah. Clearly, Jesus knew the game, and he realized that the Kabbalistic Jews would ultimately subvert the Gentile empires.
4. We are nearing the End Game of the New World Order, which is the current and final attempt of the Fallen Angels to usurp God, make humanity worship them and their Leader, and ultimately destroy us.
The Jews are a usurpation of Israel. Instead of God’s Chosen People, they’re now God’s Chosen Traitors, and the representatives of the Fallen Angels.
Through the Kabbalah, they know the secrets of the fallen angels and their offspring. This is the source of their power.
They have also been shepherding the Nephilim genes throughout the generations. This explains their obsession with bloodlines.
Incidentally, it’s not just the Jews. Many Kings did and do indeed claim all sorts of direct lineage to the ‘Gods’, ie powerful Nephilim Giants. Chinese Emperors referred to the ‘dragon blood’, which is what it is about.
This is NOT to say these claims were all (equally) legitimate, but it is the original background of the claim to ‘divine right’ for their ‘bloodlines’ to rule. I’m pretty sure these ‘nobles’ are full of shit, many ‘royal’ lineages are corrupt, but on the other hand, it’s not for nothing they are so hell bent on intermarriage, often at the risk of inbreeding.
All this explains the evil genius and seemingly impossible scope of the Conspiracy. With a 10 litre brain (and the older incarnations were even MUCH more powerful) one can think ahead. No doubt about it. They are not ‘aliens’, but they claim to ‘be from the stars’ since the old days: the Annunaki (Nephilim) said the same things to the people of Sumer.
Moses was indeed a hero. His war was just: his enemies were simply insanely evil, and much mightier than he and his men were. He could only do crush his enemies with the direct leadership of God himself.
Israel will have to rise to the occasion again: God’s Chosen People, no longer Abraham’s seed, but those who are reborn in the Spirit and keep His Commandments, will be fighting the same enemies in the decades ahead. The Nephilim are coming back. Their genome is known to the initiated. With current technology, they are undoubtedly trying to genetically re-engineer them.
Perhaps this is what Jesus had in mind, when he said: “But as the days of Noah were, so shall also the coming of the Son of man be.”
We are very close to the endgame, and young people will witness most, if not all of it.

—————–
Related- Chuck Misler has done great work on this stuff, and the others are building on him:

The Godrules channel on Youtube is a treasure trove; here’s some perspective on the Giants and the Smithsonian coverup.

Rob Skiba also has great stuff; here is his take.

Steve Quayle also must be mentioned.
Some of these guys are nominally ‘suspect’ because they buy Zionism yadayada, but they are Bible scholars. Skiba has been waking up to the JQ.  But their work on the Book of Enoch and its contents is top notch, no doubt about it.