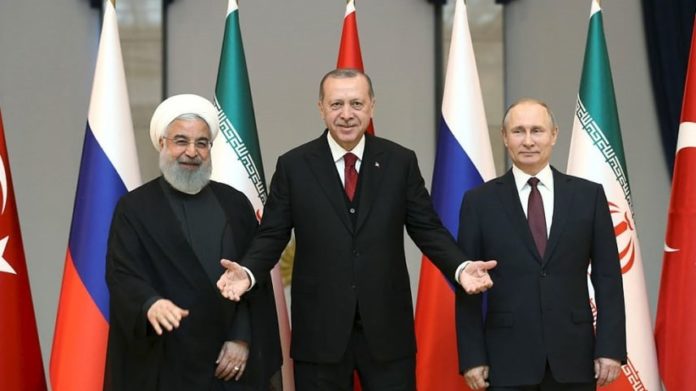 Iranian Foreign Ministry Spokesman Seyyed Abbas Mousavi says Tehran, Moscow, and Ankara are on the brink of achieving a final deal on the political settlement of the Syria crisis as the three states’ leaders convene in Ankara.

Speaking in a press briefing in Tehran on Monday, Mousavi expressed the hope that the Monday talks between President Hassan Rouhani of Iran, Vladimir Putin of Russia, and Recep Tayyip Erdogan of Turkey would yield a result that serves the Syrian people’s interests.

“We are on the verge of reaching a good deal on restoration of peace to Syria,” he said, adding that the fight against terrorism will continue until full eradication of the phenomenon.

While moving towards de-escalation and easing of tensions in the region, Iran, Russia, and Turkey will respect the sovereignty of Syria, Mousavi noted.

“All sides must respect Syria’s territorial integrity and sovereignty if we want to settle the conflict there,” he added.

Rouhani has travelled to Ankara at the official invitation of Erdogan to take part in the fifth trilateral summit of Iran, Turkey and Russia – the three guarantors of the Astana peace process for the resolution of Syria crisis.

In addition to the tripartite summit, the presidents of Iran, Russia and Turkey are going to hold negotiations on the promotion of mutual cooperation on various economic issues and the regional communications.

President Rouhani is also planned to hold separate meetings with Erdogan and Putin for talks on the major bilateral, regional and international issues.

Iran, Russia and Turkey are guarantor countries that brokered a ceasefire in Syria in December 2016, leading to the Astana talks, which are running parallel to the Geneva peace talks.

The leaders of the three countries regularly meet for an assessment of the process which focused on Idlib and adjacent areas – the last stronghold of the rebels – and a political process which awaits the formation of a constitutional committee.