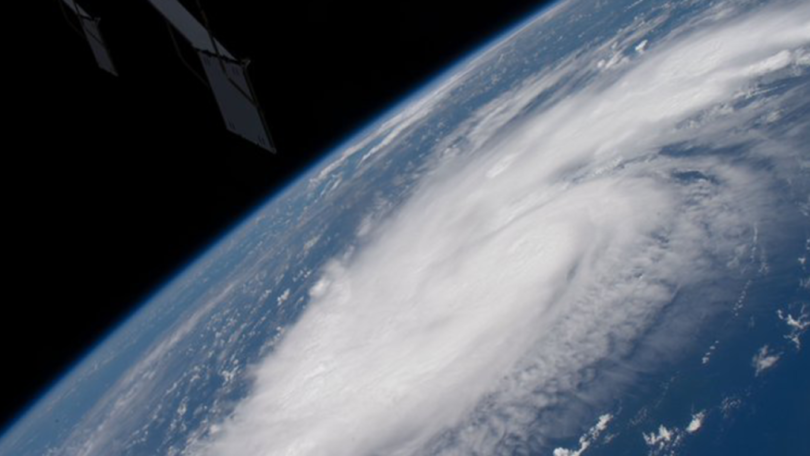 “Dorian was morphed into a weaponized and
extremely dangerous “hurricane tornado” by
the geoengineers. The globalists are doing
everything possible to support their absurd
CO2-driven global warming hoax. The single
best advertisement for the climate change scam
is wacky weather and climate chaos.”

An Open Letter to the Chemtrail Deniers and Global Warming Stalwarts

SOTN Editor’s Note: Because so many people fail to believe in the existence of chemtrails, they make it much more difficult to expose them and ban them. Therefore, this post begins with an “Open Letter” to all of those folks so they can begin to break free from the globalist-concocted prison. Otherwise, the weather disasters will only get more dangerous and the climate catastrophes will cause more societal disruption.

For years now SOTN has received numerous emails from folks who refuse to even consider the existence of chemtrails. These same individuals refuse to admit that extremely unusual chemtrail patterns are not normal condensation trails emitted by commercial airliners and military jets. For example, here is just one of those blatant chemtrail patterns:

Our response to them is always the same.

First, the deniers need to explain in scientific detail why the chemtrails in the following link are so different than regular contrails. Also, why these long, defined lines of chemtrails emissions immediately spread out and form chemclouds, and then chemcloud cover, which completely change the day’s official weather forecast that predicted a sunny day and blue sky for the next 24 hours.

Secondly, the deniers need to explain why so many of our readers experience an established medical ailment and sometimes serious health condition now known as Chemtrail syndrome. The well-researched article below, by a board-certified Integrative Health Consultant, describes the many symptoms associated with Chemtrail syndrome. That so many otherwise healthy people now complain of many of these symptoms not long after chemtrails are sprayed in the skies above them provides irrefutable anecdotal evidence that this type of chemical geoengineering technique is downright toxic.

Thirdly, the chemtrail deniers need to respond to the Air Force pilot who flew specially equipped military jets for the ultra-classified military chemtrail program. He risked his life, and the life of his family, to blow the cover off this global solar radiation management operation designed to block the rays of the sun across America. This courageous pilot also revealed the details and inner workings of the Pentagon’s top-secret program, named OPERATION INDIGO SKYFOLD, that only an insider could have known about.

Fourth, it has been proven by several climate change investigators and weather researchers that the proven Global Warming hoax relies on data that has been radically falsified and then stealthily skewed. Many of these same sleuths have provided volumes of scientific evidence that conclusively demonstrate that climate change is not following the utterly fabricated CO2-driven narrative; rather, it’s the result of extensive chemical geoengineering operations being conducted worldwide. The following research paper offers an excellent and highly authoritative disquisition on this weighty matter.

Fifth, the deniers are now compelled to justify the government’s unrelenting insistence that chemtrails are contrails when they obviously are not. Why would the US government outright lie about the composition of the jet exhausts, or the chemtrail emissions, when they must be significantly different in order to rapidly create clouds where there were none moments before. Such cloud-seeding techniques require a special formulation of chemicals, the exact mix of which needs to be in a precise proportion. To lay down a massive cloud cover in a couple of hours in no easy undertaking unless an immense atmosphere-altering enterprise has been previously put into place. In point of fact, that covert government enterprise utilizes toxic coal fly ash.

Lastly, when a renowned nuclear physicist and “maverick geophysicist” has provided clear-cut evidence that aluminum oxide from coal fly ash is the major component of the chemtrail aerosols, the government criminal conspiracy has been exposed. Coal fly ash, which has been produced as a toxic waste product from coal-fired power plants for years, is very high in aluminum oxide content. Aluminum oxide is the primary component of chemtrail formulations because chemically mobile aluminum is quite hygroscopic and, therefore, an excellent agent with which to generate chem-clouds and cover.

When any government deceives the public about such an immense secret program that profoundly harms the populace, there must be something very wrong with it (PROOF POSITIVE: US Government Has Outright Lied About Chemtrails Since Early 1990s—Undeniable Official Docs!).

The most alarming aspect of this slow-motion ELE (extinction-level event) is that now THEY’RE PUTTING THE CHEMTRAILS ON SUPER STEROIDS. Why the perpetrators have ramped up considerably a weather modification program that’s known to substantially exacerbate climate change can only be understood as follows: The globalist cabal has no other way to manufacture so many weather calamities and so much climate chaos in order to implement their New World Order agenda.

Even Hurricane Dorian fits this cynical pattern to the “T” as the exposé that follows clearly elucidates: OPERATION SUPERSTORM DORIAN: A Geoengineered Hurricane Weaponized and Targeting Florida—Why?

With sustained winds of 185mph and wind gusts a high as 220mph the geoengineers have succeeded in creating another “hurricane tornado” (See graphic above). The devastating type of weather weaponization is designed to “shock and awe” the targeted communities and/or affected populace. This is quite similar to the U.S. military bombing a civilian population into oblivion with their most advanced weaponry. It will undoubtedly give rise to a new form of weather cataclysm-triggered PTSD. This particular event will also be used as an example of what the globalists can, and will, do to any nation that fails to comply with their NWO dictates.