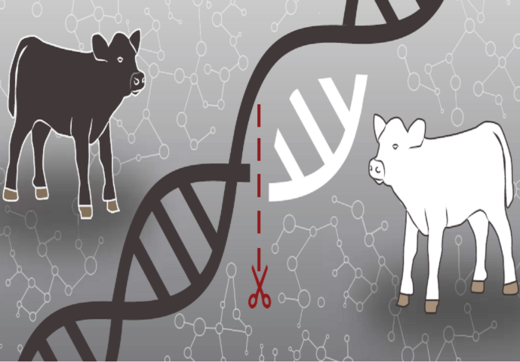 How do you get a better cow? You breed it. For decades, cattle ranchers, dairy farmers, and others have relied on a billion-dollar animal genetics industry to get fitter, happier, and more productive livestock, working with specialists to find the best parents in the barn, and paying top dollar for elite semen. It’s a costly process, and some farmers mate selectively for generations before the whole herd comes out right.

Imagine if that could happen faster — say, in a year or two, instead of decades. That’s the promise of gene-editing, a still-emerging technology in agriculture. Biologists use precision technology, such as CRISPR, to break the double helix, delete sections of those DNA strands, and then insert new genes that can occur naturally in other breeds. Boosters say these “molecular scissors” are a high-tech, rapid update on traditional cross-breeding, which has been practiced since time immemorial.

Those advocates include Recombinetics, a Minnesota-based animal genetics company. Its signature accomplishment is the “polled,” or hornless, Holstein dairy cow, which scientist Dan Carlson achieved by “turning off” the gene for the horns that farmers otherwise mechanically remove for safety reasons. That mutation occurs naturally in other breeds, like the Angus beef cow, and can be achieved rapidly through gene editing. This is why Mitch Abrahamsen, a company executive, has said his gene-edited animal is the same as one that’s cross-bred conventionally.

It turns out he’s wrong about that. Last month, scientists in the Food and Drug Administration’s (FDA) Center for Veterinary Medicine found that Recombinetics’ polled cattle had some notable irregularities. During a routine data run, they unexpectedly found foreign, non-bovine DNA that had bound itself to the animal’s genetic sequence during the edits — specifically, genes from the lab material. And while no one’s saying that the mutation is unsafe, either to humans or animals, no one can guarantee its safety either. It’s casting the slam-dunk claims about gene editing in doubt, and animal scientists are calling to pause the rush to food of the future.

The discovery was an accident. Alexis Norris, an FDA bioinformatician, was tinkering with new, unfinished software that the agency will use to analyze massive caches of information associated with products⁠ — like gene-edited animals and cell therapies⁠ — that biotech companies hope to bring to market. For testing purposes, she grabbed data from the hornless cow’s genome from Carlson’s published research, which is available online. Almost as a lark, she threw in the part of the genetic code where Carlson had turned off the horns, because it was small and quick to process.

That’s when Norris saw something unusual. Gene editing is often described as a cut-and-paste job. As geneticists remove parts of the strands, they’ll insert new material, called DNA templates, that adhere to the newly exposed ends. The templates are introduced to cells through a bacterial molecule called a plasmid. In this case, it wasn’t just the templates that adhered. It was the whole plasmid. These vehicles commonly carry genes that are associated with resistance to neomycin and ampicillin, which are antibiotics used to treat common cattle ailments, like E. coli infections and pneumonia. Essentially, the cow was cross-contaminated with antibiotic-resistant lab material.

“When you create a DNA break, and that could be with a genome edit, the cell wants to repair itself,” says Heather Lombardi, who directs animal bioengineering at FDA. “Ideally, it will repair itself correctly. But it can also integrate any DNA that’s around. There’s that potential.”

The discovery that gene editing can, in fact, introduce foreign DNA to an animal, could be an item of concern to the livestock industry. Under current regulations, food from gene-edited animals is treated as if it came from genetically modified animals — that is, animals that were mutated in a way that couldn’t have happened naturally. What’s the difference? Think about the hornless Holstein. Theoretically, it’d be possible to breed one naturally, by mating cows on the farm. Compare that to the AquAdvantage salmon, which was created with genetic material from an eel — a progression that could only happen in a lab.

The AquAdvantage took over 25 years to be cleared for market, a fate that other companies are trying to avoid. Recombinetics has argued that milk from gene-edited cows wouldn’t be a novel innovation, but identical to what we’re already drinking. In the parlance of FDA, that milk would be “generally recognized as safe” to eat, and wouldn’t have to endure the decades-long approval process. (The company’s 2016 application for market approval failed.) Meanwhile, pork farmers eager for disease-resistant swine have asked the United States Department of Agriculture, which has a closer relationship with the livestock industry, to take over regulation of gene-edited animals.

This isn’t the first time a plasmid has stuck to an edited gene. In a pre-print study of Norris’s discovery — that is, an academic article awaiting peer review — the authors found multiple instances in other experiments. It’s happened to scientists who use CRISPR to edit fish and mouse genomes, and others who use an older gene-editing tool called ZFNs. Those integration errors are often not major findings, leading Lombardi and Norris to suspect that they’re underreported or overlooked. In a statement, Tad Sonstegard, an executive at a Recombinetics subsidiary called Acceligen, acknowledged that the company hadn’t found the foreign plasmid, but added that it now screens specifically for them.

It should be noted that the extra DNA introduced to the cow isn’t dangerous. The antibiotic resistance is controlled by another DNA sequence, called a promoter, that’s coded for bacteria. For that reason, Lombardi says the trait is “unlikely” to turn on in cows. Laura Epstein, an FDA spokeswoman, said the agency couldn’t comment on whether or not the finding would affect any kind of petition to approve hornless Holsteins, but added that the genes aren’t a safety risk, per se. (Recombinetics hasn’t re-applied since its failed bid in 2016.)

Ultimately, the finding shows that scientists still have much to learn about gene editing, and that it clearly isn’t just a quicker form of selective breeding. “It’s still sort of a young technology, and there’s improvements that are still being made,” says Lombardi. “Things can go wrong that you don’t intend to happen, and they’re not always detected. And so we say, although it may not present any additional risk or safety concern, we think we should look at it to make sure.”

Correction: After this article published, FDA contacted us to note that the antibiotic resistance is “unlikely” to turn on in cows, but that outcome isn’t certain.