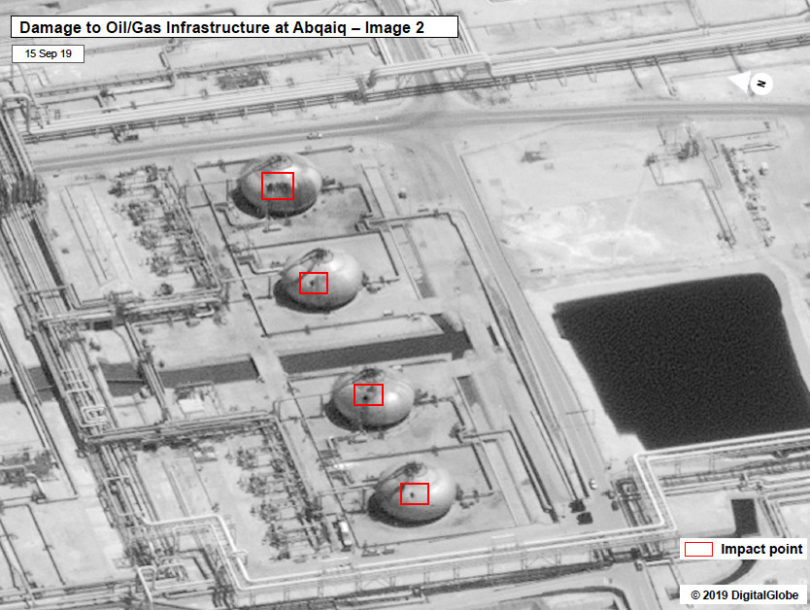 Saturday’s attack on the Saudi oil and gas processing station in Abqaiq hit its stabilization facility:

The stabilization process is a form of partial distillation which sweetens “sour” crude oil (removes the hydrogen sulfide) and reduces vapor pressure, thereby making the crude oil safe for shipment in tankers. Stabilizers maximize production of valuable hydrocarbon liquids, while making the liquids safe for storage and transport, as well as reduce the atmospheric emissions of volatile hydrocarbons. Stabilizer plants are used to reduce the volatility of stored crude oil and condensate.

Secretary Pompeo @SecPompeo – 21:59 UTC · Sep 14, 2019
Tehran is behind nearly 100 attacks on Saudi Arabia while Rouhani and Zarif pretend to engage in diplomacy. Amid all the calls for de-escalation, Iran has now launched an unprecedented attack on the world’s energy supply. There is no evidence the attacks came from Yemen.
We call on all nations to publicly and unequivocally condemn Iran’s attacks. The United States will work with our partners and allies to ensure that energy markets remain well supplied and Iran is held accountable for its aggression

The pictures show some 17 points of impact. There are cars visible in the second more detailed picture that demonstrate the gigantic size of the place. The targets were carefully selected. At least 11 of those were egg shaped tanks with a diameter of some 30 meter (100 foot). These are likely tanks for pressurized (liquidized) gas that receive the condensate vapor from the stabilization process. They all have now quite neat holes in their upper shells.

The piping to and from the egg shaped tanks shows that these were configured in groups with double redundancy. Two tanks beside each other share one piping system. Two of such twin tanks are next to each other with lines to their processing train. There are a total of three such groups. Damage to any one tank or group would not stop the production process. The products would be routed to another similar tank or group. But with all tanks of this one special type taken out the production chain is now interrupted.

Two processing areas were hit and show fire damage. At least the control equipment of both was likely completely destroyed:

Consultancy Rapidan Energy Group said images of the Abqaiq facility after the attack showed about five of its stabilization towers appeared to have been destroyed, and would take months to rebuild – something that could curtail output for a prolonged period.

“However Saudi Aramco keeps some redundancy in the system to maintain production during maintenance,” Rapidan added, meaning operations could return to pre-attack levels sooner.

The targeting for this attack was done with detailed knowledge of the process and its dependencies.

The north arrow in those pictures points to the left. The visible shadows confirm the direction. The holes in the tanks are on the western side. They were attacked from the west.

The hits were extremely precise. The Yemeni armed forces claimed it attacked the facility with 10 drones (or cruise missiles). But the hits on these targets look like neither. A total of 17 hits with such precise targeting lets me assume that these were some kind of drones or missiles with man-in-the-loop control. They may have been launched from within Saudi Arabia.

There is no information yet on the damage in Khurais, the second target of the attacks.

The U.S. and Israel are able to commit such attacks. Iran probably too. Yemen seems unlikely to have this capability without drawing on extensive support from elsewhere. The planing for this operation must have taken months.

Riam Dalati @Dalatrm – 22:44 UTC · Sep 15, 2019
17 points of impact. No Drones or missiles were detected/intercepted. Saudis & Americans still at loss as to where the attack was launched from. #KSA seriously needs to shop elsewhere & replace the Patriot or reinforce it with a web of radar operated AA guns like the Oerlikon.
A source familiar with #Aramco situation told us earlier today that it was a “swarm attack”, a mix of > 20 drones and missiles, at least half of which were “suicide” drones. #USA & #KSA, he said, are ‘certain’ that attack was launched from #Iraq but ‘smoking gun still missing’
They are also ‘fairly certain’ that #IRGC was behind the operation because, even though the missiles used were identical to those of the #Houthis, an inspection of the debris found in the desert revealed a ‘couple of new updates’ and a ‘distinctly better craftsmanship’

The Wall Street Journal reports of the damage:

The strikes knocked out 5.7 million barrels of daily production, and the officials said they still believe they can fully replace it in coming days. That would require tapping oil inventories and using other facilities to process crude. One of the main targets of the attack was a large crude-processing plant in Abqaiq.
…
“It is definitely worse than what we expected in the early hours after the attack, but we are making sure that the market won’t experience any shortages until we’re fully back online,” said a Saudi official.
…
Even if Saudi officials were successful in restoring all or most of the lost production, the attack demonstrates a new vulnerability to supply lines across the oil-rich Gulf.

Tankers have been paying sharply higher insurance premiums, while shipping rates have soared in the region after a series of maritime attacks on oil-laden vessels, which the U.S. has blamed on Iran.
…
Khurais produces about 1.5 million barrels a day and Abqaiq, the world’s biggest crude-stabilization facility, processes seven million barrels of Saudi oil a day, turning crude into specific grades, such as Arabian Extra Light.

Aramco gave no timeline for output resumption. A source close to the matter told Reuters the return to full oil capacity could take “weeks, not days”.

Riyadh said it would compensate for the damage at its facilities by drawing on its stocks, which stood at 188 million barrels in June, according to official data.

U.S. President Donald Trump was way more careful in attributing the strike than his Secretary of State.

Donald J. Trump @realDonaldTrump – 0:50 UTC · Sep 16, 2019
Saudi Arabia oil supply was attacked. There is reason to believe that we know the culprit, are locked and loaded depending on verification, but are waiting to hear from the Kingdom as to who they believe was the cause of this attack, and under what terms we would proceed!

Any direct attack on Iran would result in swarms of missiles hitting U.S. military installations in the United Arab Emirates and Qatar. Saudi water desalination plants, refineries and ports would also be targets.

It is doubtful that Trump or the Saudis are ready to risk such a response.

The attack on Abqaiq was not the last one and all Saudi installations are extremely vulnerable:

Yemen’s Houthi rebels said oil installations in Saudi Arabia remain among their targets after attacks against two major sites slashed the kingdom’s output by half and triggered a surge in crude prices.

The Iranian-backed rebel group, cited by the Houthi’s television station, said its weapons can reach anywhere in Saudi Arabia. Saturday’s attacks were carried out by “planes” using new engines, the group said, likely referring to drones.

Middle East Eye, a Qatari financed outlet, reported yesterday that the attack was launched from Iraq by Iran aligned forces in revenge for Israeli attacks in Syria. The author, David Hearst, is known for slandered reporting. The report is based on a single anonymous Iraqi intelligence source. Qatar, which is struggling with Saudi Arabia and the UAE over its support for the Muslim Brotherhood, would like to see a larger conflict involving its rivals east and west of the Persian Gulf. The report should therefore be disregarded.

Saudi Arabia has no defenses against this kind of attacks. The U.S. has no system that could be used for that purpose. Russia is the only country that can provide the necessary equipment. It would be extremely costly, and still insufficient, to protect all of the Saudi’s vital facilities from similar swarm attacks.

Attacks of this kind will only end when Saudi Arabia makes peace with Yemen and when the U.S. ends its sanctions of oil exports from Iran. It is high time for hawks like Pompeo to recognize that.