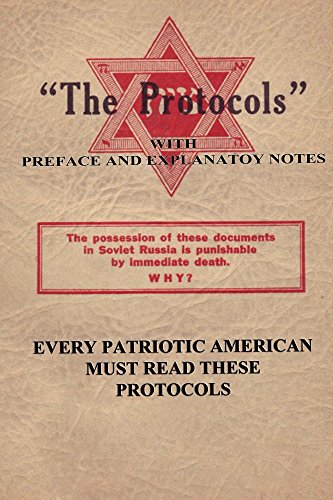 The Fatal Discourse of Emanuel Reichhorn Chief Rabbi of France, a Funeral Oration over Grand Rabbi Simeon-ben-Ihuda of Bohemia

[“(In its issue of 21 October, 1920 (No. 195) La Vieille France published an extremely important Russian document in which the following passage occurs:

“There is a striking analogy between The Protocols of the Learned Elders of Zion and the discourse of the Rabbi Reichhorn, pronounced in Prague in 1869 over the tomb of the Grand Rabbi Simeon-ben-Ihuda, and published by Readcliffe, who paid with his life for the divulgation. Sonol, who had taken Readcliffe to hear Reichhorn, was killed in a duel some time afterwards. The general ideas formulated by the Rabbi are found fully developed in the Protocols, (which were published about 35 years later)”.

“In its issue of 10 March, 1921, (No. 214) La Vieille France gives the version of this funeral oration which was published in La Russie Juive. It is perfectly clear that the funeral oration and The Protocols of the Elders of Zion come from one and the same mint. Both are prophetic; and the power which made the prophecies has been able to bring about their fulfillment. There can no longer be any doubt as to whose is the power which is disturbing the world, creating World Unrest, and at the same time reaping all of the profits. Jewry is enslaving all Christian peoples of the earth. There IS a Jew World Plot and it now stands finally and completely unmasked).”]

“1. Every hundred years, We, the Sages of Israel, have been accustomed to meet in Sanhedrin in order to examine our progress towards the domination of the world which Jehovah has promised us, and our conquests over the enemy, Christianity.”

“2. This year, united over the tomb of our reverend Simeon-ben-Ihuda, we can state with pride that the past century has brought us very near to our goal, and that this goal will be very soon attained.”

“3. Gold always has been and always will be the irresistible power. Handled by expert hands it will always be the most useful lever for those who possess it, and the object of envy for those who do not. With gold we can buy the most rebellious consciences, can fix the rate of all values, the current prices of all products, can subsidize all State loans, and thereafter hold the states at our mercy.”

“4. Already the principal banks, the exchanges of the entire world, the credits of all governments, are in our hands.”

“5. The other great power is THE PRESS. By repeating without cessation certain ideas, the Press succeeds in the end in having them accepted as actualities. The Theatre renders us analogous services. Everywhere the Press and the Theatre obey our orders.”

“6. By the ceaseless praise of DEMOCRATIC RULE we shall divide the Christians into political parties, we shall destroy the unity of their nations, we shall sow discord everywhere. Reduced to impotence, they will bow before the LAW of OUR BANK, always united, and always devoted to our Cause.”

“7. We shall force the Christians into wars by exploiting their pride and their stupidity. They will massacre each other, and clear the ground for us to put our people into.”

“8. The possession of the land has always brought influence and power. In the name of social Justice and Equality we shall parcel out the great estates; we shall give the fragments to the peasants who covet them with all their powers, and who will soon be in debt to us by the expense of cultivating them.”
“Our capital will make us their masters. We in our turn shall become the great proprietors, and the possession of the land will assure the power to us.”

“9. Let us try to replace the circulation of gold with paper money; our chests will absorb the gold, and we shall regulate the value of the paper which will make us masters of all the positions.”

“10. We count among us plenty of orators capable of feigning enthusiasm and of persuading mobs. We shall spread them among the people to announce changes which should secure the happiness of the human race. By gold and by flattery we shall gain the proletariat which will charge itself with annihilating Christian capitalism. We shall promise workmen salaries of which they have never dared to dream, but we shall also raise the price of necessities so that our profits will be greater still.”

“11. In this manner we shall prepare Revolutions which the Christians will make themselves, and of which we shall reap the fruit.”

“13. We have established our own men in all important positions. We must endeavor to provide the Goyim with lawyers and doctors; the lawyers are au courant with all interests; doctors, once in the house, become confessors and directors of consciences.”

“14. But above all let us monopolize Education. By this means we spread ideas that are useful to us, and shape the children’s brains as suits us.”

“15. If one of our people should unhappily fall into the hands of justice amongst the Christians, we must rush to help him; find as many witnesses as he needs to save him from his judges, until we become judges ourselves.”

“16. The monarchs of the Christian world, swollen with ambition and vanity, surround themselves with luxury and with numerous armies. We shall furnish them with all the money their folly demands, and so shall keep them in leash.”

“17. Let us take care not to hinder the marriage of our men with Christian girls, for through them we shall get our foot into the most closely locked circles. If our daughters marry Goyim they will be no less useful, for the children of a Jewish mother are ours. Let us foster the idea of free love, that we may destroy among Christian women attachment to the principles and practices of their religion.”

“18. For ages past the sons of Israel, despised and persecuted, have been working to open up a path to power. They are hitting the mark. They control the economic life of the accursed Christians; their influence preponderates over politics and over manners.”

“19. At the wished for hour, fixed in advance, we shall let loose the Revolution, which by ruining all classes of Christianity, will definitely enslave the Christian to US. Thus will be accomplished the promise of God made to His people.”