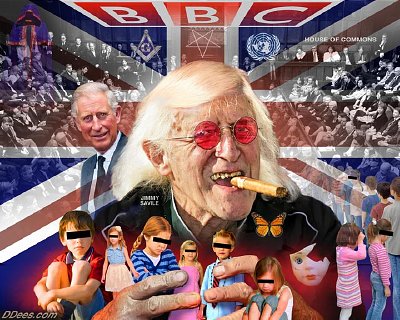 Had someone said to me just a few years back that a global Satanic paedophile ring existed at the very highest levels of power I’d have laughed. Well as they say, I’m not laughing now. Once you start researching the issue in depth this fact becomes glaringly obvious. In fact it’s hiding in plain sight. Just take the Jimmy Savile case. This guy went, in less than a decade, from being an uneducated miner to disc jockey to confidante of the British Government and Royal Family.

His child molesting proclivities were known for decades yet he still went from strength to strength. He hobnobbed with paedophile Lord Mountbatten, spent weekends with Margaret Thatcher, was a confidante of Prime Minister Ted Heath, and most incredible of all, according to Princess Diana, Prince Charles suggesting that he (Savile) advise on their marriage problems. Can you believe that? An uneducated miner turned disc jockey with no specialised knowledge or talents is magicked into mediating between the Heir-apparent and his wife. All while mired in allegations of paedophilia and necrophilia. By the way Charles also gave convicted paedophile Bishop Peter Ball a free house on his estate after his conviction.

(((Edwina Currie))) gave him effective control of Broadmoor prison hospital, in which role he invited a paedophile Who’s Who to visit, stay over, and ‘interact’ with the patients. (((Danny Cohen))) and (((Esther Rantzen))) – Rancid? – gave him free rein to run, wait for it, theChildLine TV programme, a programme according to the BBC which ‘ensures an adult is at the end of a phone to help children cope with all kinds of serious issues’. That adult was Jimmy Savile, just waiting to put a friendly arm around the unfortunate children. Rancid herself admitted that at this very time rumours were swirling among BBC staff about Savile’s sickening vices. And to round it off the station (thank you Mr. Cohen) pulled a planned exposure of Savile, instead broadcasting a hagiographiucal tribute to his life.

And the miner/disc jockey came to be a firm friend of of former Prime Minister Edward Heath who was accused by David Icke – while Heath was alive – of being a Satanic child molester and child murderer. Yet he never sued for defamation. Multiple police forces investigated but he was never even charged. Big surprise.  Heath also regularly met in Westminster with the notorious Paedophile Information Exchange, an organisation which advocated for the decriminalisation of paedophilia. Why didn’t Heath sue for defamation? Obviously because he feared a trial. Step in again the BBC which interviewed David Icke and tried to show him to be a deranged fantasist. Great journalism there lads. The in-your-face Westminster paedophile ring was thoroughly investigated by MP Geoffrey Dickens who then handed the incriminating files – all 114 of them – to Home Secretary (((Leon Brittan))). Who unfortunately lost them. Not surprising given that Brittan was himself one of the main suspects.

What’s notable about all of these scandals is that few were held accountable. It was all ‘lessons have been learned’ and we’re now ‘moving forward’. Well actually one person really got it in the neck. Poor old Carl Beech who tried to expose the ring. This seriously damaged individual admittedly made a poor witness but could have, like the various false rape accusers, been given a slap on the wrist and told to go away. Instead the Establishment sent a very strong message to would-be exposers of powerful paedophile rings by sentencing this unfortunate and badly-damaged man to eighteen years in prison.
That’ll show ’em.

Look, I’ve only scratched the surface here and highlighted some of the more bizarre elements of the Savile case to underline my thesis. That Savile, just like Epstein, Marc Dutroux and God knows how many others, was a procurer of vulnerable children for the so-called elites, those at the top of the international wealth and power pyramid. How many? An estimated 8 million children are reported missing each year around the world. Of that number, according to the latest U.S. Department of Justice research, an estimated 800,000 children will go missing in the United States this year.

So just let your mind play on these facts and let the unimaginable scale of the horror wash over you.

Did you know? …..”Dr. Antony Kidman  [Nicole’s father] died shortly after fleeing Australia when accused of the sexual abuse and murder of children in an elite Sydney pedophile ring. A month prior Fiona Barnett had filed a complaint with the Australian NSW police and ChildAbuse Royal Commission alleging Kidman’s sexual and physical assaults on her throughout childhood. When the Commission opened an investigation the clinical psychologist suddenly left his 43 years with the Sydney University of Technology and Royal North Shore Hospital to stay in Singapore until he died. The family has refused to comment and Singapore police opened an investigation on what they termed as an unnatural death. The ICLCJ Court has been looking into Barnett’s allegations against Kidman in relation to their investigation of the global elite Ninth Circle Satanic Child Sacrifice Cult. Over sixty eyewitnesses such as Barnett have testified of Ninth Circle childsacrifice and pedophile activities that spanned the globe, including criminal activities against children in the Americas, Netherlands and UK commonwealth countries such as Australia.”