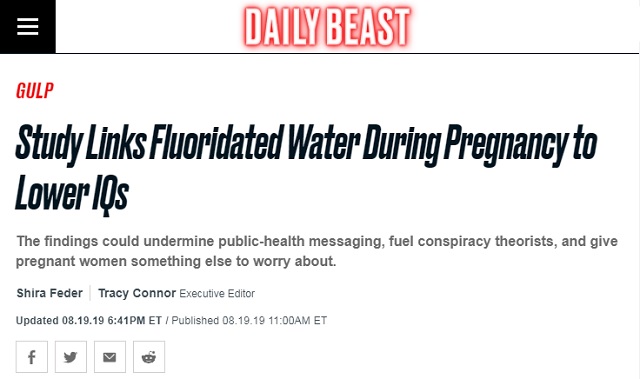 After decades of lying to the public about the well-documented dangers of fluorideand demanding everyone who says otherwise be censored, the media just finally admitted fluoride is lowering our children’s IQs.

From The Daily Beast, “Study Links Fluoridated Water During Pregnancy to Lower IQs”:

An influential medical journal published a study Monday that links fluoride consumption during pregnancy with lower childhood IQs—a finding that could undermine decades of public-health messaging, fire up conspiracy theorists, and alarm mothers-to-be.

The research was expected to be so controversial that JAMA Pediatrics included an editor’s note saying the decision to publish it was not easy and that it was subjected to “additional scrutiny.”

“It is the only editor’s note I’ve ever written,” Dimitri Christakis, editor in chief of JAMA Pediatrics and a pediatrician, told The Daily Beast. “There was concern on the journal’s editorial team about how this would play out in the public eye and what the public-health implications would be.”

About three-fourths of the United States drinks fluoridated tap water—which the U.S. Centers for Disease Control and Prevention declared one of the 10 greatest public-health achievements of the 20th century because it dramatically reduces tooth decay.

I’ve been sharing articles about the dangers of fluoride since 2005 and was labeled a “conspiracy theorist” and censored by Google as a result (many years before the latest massive purge).

The Fluoride Action Network under Dr. Paul Connett has been leading the charge against water fluoridation for decades and were smeared as “quacks” and “conspiracy theorists” just for taking a scientific look at the data and sharing their findings. They’ve had a compendium of dozens of studies showing links between fluoride and lower IQs for ages.

They were right. The controlled media which smeared them were wrong.

Our media controllers should be asked why they lied to the public for decades in order to keep this drugging program going and IQs falling.

This is why the FBI is now declaring “conspiracy theories” to be the “new domestic terrorism threat” and the government — even under Donald Trump’s watch — is working rapidly to arrest people for pre-crime, seize dissidents’ guns through red flag gun laws, institute swift executions for so-called “hate crimes,” “involuntary confinement” for people the state deems “mentally disturbed,” and “detect mass shooters before they strike” — which we’re now learning means arrest anyone who fits the media’s hoax “dangerous young white male terrorist” stereotype.

The conspiracy theorists were right, folks.

This is why our ruling oligarchs are moving so hard to shut down everyone who questions their fake narrative.