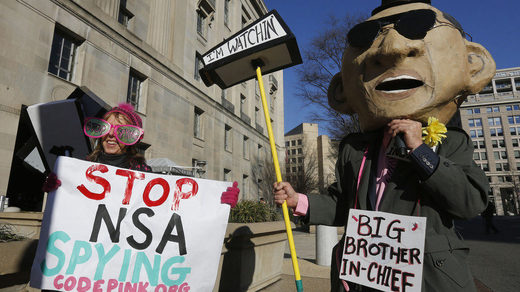 A group of former intelligence agency directors and other trustworthy cybersecurity pros has launched a charitable initiative to protect US elections against foreign interference. So who are these noble guardians of democracy?

The “US Cyberdome” claims to apply top-of-the-line cybersecurity capabilities to the country’s vulnerable election systems, motivated by nothing more than a selfless devotion to protecting democracy against “sophisticated attacks by constant and ever-evolving threats.” Stuffed with sinister ex-spooks like former Director of National Intelligence James Clapper and former Homeland Security Secretary Michael Chertoff, Cyberdome will keep America’s democracy safe from “purposeful attacks and exploits” and even “undue influence from enemies both foreign and domestic” – at no cost!

One might be forgiven for looking this particular gift horse in the mouth. Clapper, after all, stood in front of Congress and denied under oath that the NSA was collecting data on US citizens, an apparent act of perjury he attributed first to forgetting about the Patriot Act section used to authorize the agency’s StellarWind surveillance program and later to simple misspeaking. He has also claimed Russians are “genetically driven to co-opt, penetrate, gain favor” – not exactly the kind of impartial authority one wants guarding one’s democracy. And Chertoff, a member of the infamous Atlantic Council, co-wrote both the Patriot Act and the CIA interrogation memo advising agents on the judicious use of waterboarding.

Other members of Cyberdome’s board of advisors include former Homeland Security Secretary Jeh Johnson, who oversaw Obama’s targeted drone assassination program and approved the killing of US citizens like Anwar al-Awlaki without due process; and former CIA director Michael Morell, another Atlantic Council member who was responsible for reviewing the “intelligence” that went into then-Secretary of State Colin Powell’s infamous United Nations speech in which he claimed Iraq had weapons of mass destruction. A less trustworthy bunch has not been assembled on an advisory board since the Orwellian browser plugin NewsGuard was unveiled.

It’s not like Cyberdome’s tech isn’t expensive – the group was founded by Matt Barrett, who led the development of the National Institute of Standards and Technology’s “Cybersecurity Framework,” a best-practices security infrastructure program that came with a price tag so hefty half the organizations that reviewed it cited cost as the primary barrier to adoption. Cyberdome accepts donations (inviting donors to “Put Your Money Where Your Democracy Is!”), but securing the nation’s voting systems to NIST standards isn’t cheap.

This, it seems, is where the advisory board comes in – with such a pedigreed array of spooks on hand, elections that don’t adopt Barrett’s vision of cybersecurity could easily experience a breach or two. Top-brass spies like Cyberdome’s board know how to spoof traffic from foreign “hackers” – a capability WikiLeaks revealed the CIA possesses in the Vault7 leaks. If they want to knock off an inconvenient presidential candidate, all they need to do is spoof a hack into the voting system from whoever the bogeyman du jour is, and voila – instant Manchurian (or Siberian) candidate.

Former DHS Secretary Michael Chertoff warned when the NIST framework was unveiled in 2014 that unless Congress “really put some muscle behind it” or regulators got involved, it would be difficult to achieve widespread adoption of the “voluntary” program. Chertoff in his post-DHS career has hopped from industry to industry collecting large paychecks to consult on cybersecurity, convincing everyone from bankers to airports that the cyber-barbarians are at the gates, and only he can protect them. And Cyberdome is merely his vision writ large, with the whole election system in its sights.

The company claims its initial efforts are focused “only” on securing the 2020 presidential campaign, but its hope is to ultimately “assist all national political campaigns.” As Johnson said in a statement on Tuesday, “In the face of known, ongoing efforts by foreign powers to try to interfere in our upcoming election, US Cyberdome could not come at a more critical juncture.”

Translation? “Gee, that’s a nice democracy you’ve got there – sure would be a shame if something happened to it.”