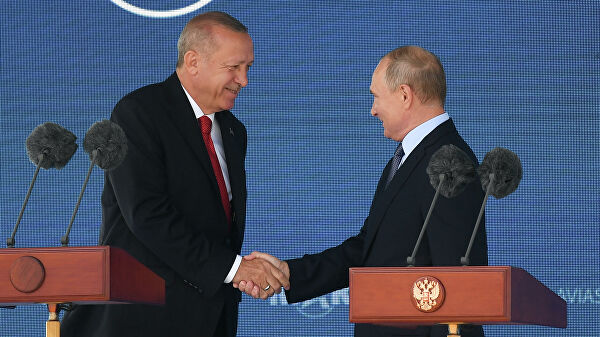 Russia and Turkey agree on measures to “normalize” the situation in the terrorist-infested northwestern Syrian province of Idlib, where the Damascus government’s Moscow-backed operations against terrorists have reportedly complicated the unlawful Turkish involvement there.

Russian and Turkish Presidents, Vladimir Putin and Recep Tayyip Erdogan, announced the decision following a meeting in Moscow on Tuesday.

“Together with Turkey’s president, we have outlined additional joint steps to neutralize the terrorists’ nests in Idlib and normalize the situation there and in the whole of Syria as a result,” Putin told a joint briefing with Erdogan.

Syria’s Russian-sponsored push has beleaguered the terrorists of the so-called Hayat Tahrir al-Sham Takfiri outfits, who are in control of Idlib. Tahrir al-Sham used to operate under the banner of al-Nusra Front or al-Qaeda’s offshoot in the Arab country.

Moscow and Ankara signed an agreement last year aimed at creating a buffer zone in the province, putting on hold a Syrian army offensive to liberate the last militant bastion in the country.

Damascus has, however, resumed its operations in the northwest as the militants in Idlib failed to abide by the agreement and began launching attacks from inside the province against civilians as well as Syrian and Russian military positions.

Ankara claims that the Syrian army’s operations have come in the way of its activities there after Syrian forces reportedly neared an Idlib-based Turkish observation zone.

Damascus views all Turkish military activities on Syrian as a violation of the country’s sovereignty, repeatedly calling on Ankara to withdraw its forces.

Erdogan claimed that the Syrian operations were threatening Turkey’s national security. “I conveyed our country’s determination on this matter personally to my dear friend Mr. Putin,” he said.

“The situation [in Idlib] has become so complicated that at this moment our troops are in danger,” Erdogan alleged, noting, “We do not want this to continue. All necessary steps will be taken here as needed.”

“The de-escalation zone must not serve as a refuge for militants, let alone a bridgehead for new attacks,” he added.

Putin and Erdogan’s meeting came on the sidelines of an international air show on the outskirts of Moscow, which showcased the Russian military and civilian aerospace industry’s achievements.

“We have many opportunities, we demonstrated new weapons systems and new electronic warfare systems,” Putin said. “In my opinion there was a lot of interest from our Turkish partners.”

Turkey has bought Russia’s state-of-the-art indigenous missile system known as S-400 despite strong opposition from the United States, and at a cost to its American ties.