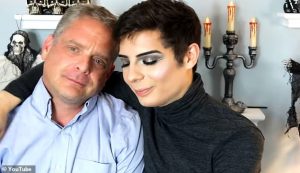 This week, the gay news site Pink News posted and then deleted a fawning profile of a gay couple with a troubling age gap. The article reported that the younger man, Kayleb, is 22 years old while the older man, Mark, is 55. This is creepy enough, but it gets much worse: the two have been “dating” for six years. Kayleb claims he was 17 when he met Mark, but the math would seem to put him at 16. Either way, it’s repulsive and wrong.

Somehow, it gets still worse. Mark was apparently Kayleb’s “first boyfriend,” and they originally had a “sugar daddy arrangement.” Translation: A 49-year-old man was paying a high school boy for sex. And this is something that a prominent, widely-read LGBT site thought we should join them in applauding.

It should go without saying that middle-aged men don’t really “date” high school boys. The correct term in this case is “grooming.” Mark found and groomed a boy young enough to be his son. Indeed, Kayleb refers to his abuser as “daddy,” so the father-son comparison is grotesquely apt. The kind of relationship that used to be featured on “To Catch A Predator” is now celebrated by LGBT media.

Celebration of the morally degraded is becoming shockingly regular. Only two months ago, Vice promoted and glorified “the next generation of drag queens” — a group of pubescent and prepubescent boys who dress like grown women and dance for the amusement of adults. Around the same time, the Left cheered a 7-year-old boy in high heels and a skirt who led the LA Pride Parade (“Trans child wins LA Pride Parade with fierce strut in heels,” as the MSN headline put it). Meanwhile, an 11-year-old boy gyrates on stage at a gay club while men throw money at him.

There are many other examples of this sort of thing. Just this past week, a drag queen decided to teach young children how to twerk at a public library in the UK. This is only slightly less creepy than the photos of small children lying on top of a drag queen at a drag queen story hour in Oregon. These macabre events are held all over the country, despite the fact that some of the drag queens have been outed as sex offenders.

All of this moves our culture in the direction of sexualization of children. Normalizers of child sexual abuse will never come out and say, “We intend to normalize child sexual abuse.” Instead they’ll encourage us to be open-minded about “age gaps,” and they’ll admonish us for being disturbed by drag queens performing for children, and they’ll insist that there’s totally nothing sexual about men throwing money at a boy dancing in women’s clothes. In other words, they’ll do everything they’re currently doing. And they’ll trust that they can scare us into silence by calling us bigots for speaking out against it.