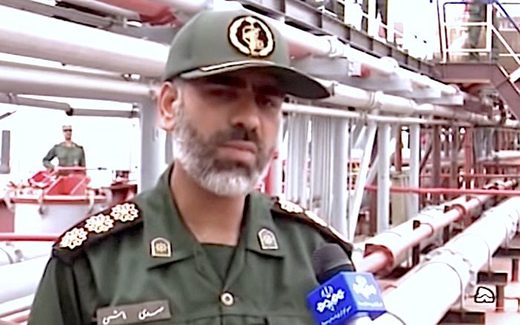 The Times of Israel

The commander of the Iranian Revolutionary Guard’s navy, Alireza Tangsiri, warned Sunday that “any illegitimate presence by the Zionists in the waters of the Persian Gulf could spark a war.”

His remark followed reports on Israel potentially taking part in a US-led international mission to secure Western vessels crossing the Strait of Hormuz, after Iran seized several oil tankers, amid escalating tensions over US sanctions on the Islamic Republic.

In an interview to the Hezbollah-affiliated Al-Mayadeen television station in Lebanon, Tangsiri warned that “whenever our commanders wish so, they are able to detain any ship, even if it is accompanied by American and British forces.”

Last week, the Ynet news site reported that Foreign Minister Israel Katz had told a closed session of the Knesset Foreign Affairs and Defense Committee that Israel was involved in US-led efforts to provide maritime security in the Strait of Hormuz.

Katz said Israel was assisting the mission to secure the crucial waterway with intelligence and in other unspecified fields. He stressed the mission was in Israel’s strategic interest of countering Iran and boosting ties with Gulf countries.

Responding to Katz’s comments, Iran’s defense minister on Thursday said that the formation of a US-led flotilla would “increase insecurity” and any Israeli involvement would have “disastrous consequences” for the region.

Tehran and Washington have been locked in a battle of nerves since US President Donald Trump withdrew from a landmark 2015 nuclear deal with Iran last year and reimposed sanctions.

Tensions have soared in the region, with drones downed and tankers mysteriously attacked in Gulf waters.

The US and its Gulf allies have accused the Islamic Republic of the tanker attacks — allegation that Tehran denies. In response, the US has been seeking to form a coalition whose mission — dubbed Operation Sentinel — it says is to guarantee freedom of navigation in the Gulf.

Besides Britain, which already has warships on protection duty in the Gulf after a UK-flagged tanker was seized by Iran’s Revolutionary Guard Corps, other European countries have refrained from joining the planned operation for fear it might harm their efforts to reach a negotiated settlement with Iran.

Iran has seized three tankers in the Gulf since last month, including the British-flagged vessel. The ship seizures came after British Royal Marines helped to impound a tanker carrying Iranian oil off the British overseas territory of Gibraltar on July 4, alleging it was destined for EU-sanctioned Syria, an accusation Iran denies.