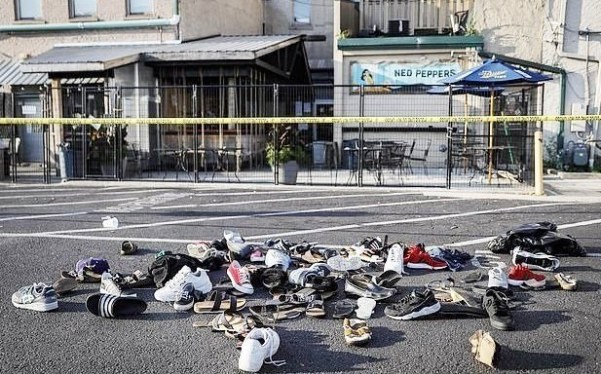 HOW THE CIA (MOSSAD!) ACTIVATES MASS-SHOOTERS DECODED! The “DEEP STATE” is DOUBLING-DOWN on ACCUSING “White” AMERICAN NATIONALISTS of BEING CRIMINALS & TERRORISTS with THEIR SERIAL “false flag” PROGRAMMED SHOOTERS and PROFESSIONAL, MULTIPLE-GUNMEN KILL TEAMS! THAT’s WHAT AMERICANS GET – BOTH LIBTARD-left AND “Conservative” CHRIST-IAN RIGHT – for LETTING THE CIA UNDER THE JEW MOB GET AWAY WITH SUPPLYING TERRORISTS IN SYRIA…. followed by their INSIDIOUS DEMORAT LYNCH-MOB “independent counsel” PROSECUTION of PRESIDENT TRUMP **WHILE** TRUMP’s OWN CHABAD FAMILY, SOROS CONNECTED SHELDON ADELSON LAS VEGAS/HOLLYWOOD MOB ORCHESTRATED the MULTIPLE-GUNMEN MASSACRE Oct 1 2017 WHICH STUPIFIED TRUMP SUPPORTERS under JEW MEDIA MOGULS BRAINWASHING HAVE NEVER CONTESTED!

EXCELLENT REPORTING by WinterWatch.net reveals how PATSIES
are SET-UP to be either MURDEROUS “MANCHURIAN CANDIDATE” ASSASSINS….
or MERELY to be MESMERIZED in a HYPNOTIC state to BE AT THE MURDER SCENE
with a GUN IN THEIR POCKET while the CIA PROFESSIONALS do the killing…
the EVIDENCE that THEY were the gunmen CAN BE FABRICATED
by CORRUPT POLICE, FBI, PROSECUTORS, and “investigators”
WITH THE EVIL JEW MEDIA MOGULS’  VAST  JEW MEDIA MONOPOLY
EVER-READY & POISED to DROP LIKE A TON OF BRICKS
on the heads of NOT JUST THE ACCUSED PATSY(s) – but to CRUSH the lives
of  MILLIONS OF AMERICANS  whom the EVIL JEWS WANT TO DEMONIZE
as “KUALAKS!” as “COUNTER-REVOLUTIONARIES!” as “NAZIS!”
and of course as “EXTREMISTS!” i.e. AS TERRORISTS!
– WHILE, MIND YOU, THE INSANE, EVIL JEWS CLIMB IN BED WITH
their “saudi” cousins in 3,000+ years of SLAVE TRADING in their
evil SATANIC  ZIO-ARAB ALLIANCE to  HIRE TENS OF THOUSANDS
OF  saudi RECRUITED JIHADI TERRORISTS
TO WIPE OUT WHOLE POPULATIONS FOR THEM in SYRIA, LIBYA, YEMEN,
IRAQ, TURKEY, SUDAN, SOMALIA, throughout Africa, in Asia and now of course
the evil “Neo-Con” JEWS are trying to use Pompeo, Bolton, and all the other “ISRAEL FIRST!” TRAITORS in the TRUMP presidency TO START ANOTHER WAR AGAINST VENEZUELANS so the EVIL JEW FINANCIERS CAN STEAL ALL of Venezeuela’s (great oil) wealth and… IMPOSE A GENOCIDAL  “white” ELITE REGIME to TERRORIZE, KILL, TORTURE & EXTORT the indigenous, native, black and poor working families majority far below!

William Joseph Bryan, Jr. (1926–1977) was an unsung heavyweight operative in the annals of Crime Syndicate history. He was a true mad genius who definitely lived large and carried out some of the greatest patsy brainwashing feats ever.   Bryan was one of the founders of modern hypnotherapy, and his work notably found use in psychological warfare during the Cold War….
Holding an M.D., J.D., and PhD, he was involved in research for the CIA, including Project ARTICHOKE and its successor, Project MKUltra, a research project into behavioral engineering of humans.

…[after his death] two Beverly Hills call girls, who claimed to have known Bryan intimately, spoke out. The girls had been “servicing” him for four years, they said, and usually both were present at the same time. During the last year of his life, they said, he was deeply depressed….
The girls said that to relieve Bryan’s depression, they repeatedly titillated his enormous ego by getting him to “talk about all the famous people you’ve hypnotized.”

As if by rote, Bryan would begin with his role of deprogramming Albert Di Salvo in the Boston Strangler case for F. Lee Bailey, then boast that he had hypnotized Sirhan Sirhan…. [BEFORE! NOT AFTER Sirhan was ACCUSED of shooting & killing presidential candidate Robert F. Kennedy]

From the time police seized Sirhan Sirhan with a .22-caliber revolver in his hand in the pantry of the Ambassador Hotel in June 1968, he has MAINTAINED THAT HE WAS HYPNOTIZED  into shooting Sen. Robert F. Kennedy.  [JOHN HINCKLEY,  accused & convicted of ATTEMPTED ASSASSINATION of President Reagan  used a .22 revolver as well.]
Sirhan’s lawyer, Lawrence Teeter, has also always maintained that HIS CLIENT WAS UNDER HYPNOSIS AT TH TIME OF THE SHOOTING.    Both Evans and Teeter argued that Sirhan was there AS A  “patsy” to be either arrested or, preferably, shot to death by police while the real assassin escaped. They both agreed that although Sirhan fired some shots before he was wrestled to the ground, none of them hit Kennedy.
William Turner and John Christian contend that BRYAN was responsible for inducing Sirhan Sirhan to fire blanks at Robert F. Kennedy with posthypnotic suggestion.

and the FBI TURNED HIM AWAY!!
https://www.breitbart.com/politics/2017/01/06/fort-lauderdale-shooter-esteban-santiago-troubled-man-already-known-fbi/

OUR GOVT. IS RUN BY TRAITORS
who HIRE TERRORISTS to ATTACK
the AMERICAN PUBLIC!!!

along with elements of THE COURTS, state & local “law enforcement,” the military,  and other u.s. govt. agencies

and SET IN MOTION

to bomb, shoot, KILL hundreds  and to TERRORIZEMILLIONS of Americans!

DO WE HAVE A PATTERN HERE?!!
THIS IS an ARTHUR SULZBERGER
JEW YORK SLIMES,
b’nai b’rith  on the hudson
UBER ESTABLISHMENT  MOUTH-PIECE
practically GLOATING
that THEY CAN GET GOVT. AGENCIES
to KILL AMERICANS with IMPUNITY!

what “THEY“ would LABEL
at any other news site
as “a CONSPIRACY THEORY“ !!

THE JEWS JUST OPENLY ADVOCATE DESTROYING
– or ASSASSINATING! – PRESIDENT TRUMP…
but he FOOLISHLY, not to say INSANELY
KEEPS DOING THEIR 9/11 COVER-UP
and EXPANDING GENOCIDAL TERROR-WARS
and WAR ON THE AMERICAN PEOPLE
DIRTY WORK for them!!

SUPPLYING TERRORISTS
with POISON GAS
– via CIA DIRECTED RAT-LINES through TURKEY, “saudi”ARABIA, or other JEWS/u.s. PUPPET MASS-MURDER REGIMES in the region –
THEN BLAMING THE VICTIMS
and the Syrian govt. & army
IS EVIL AT ITS VERY WORST –
UNPUNISHED by 320 million STUPIFIED AMERICANS
under JEW MEDIA & “deep state”MILITARY/INDUSTRIAL/FINANICAL/MEDIA/
BIG-RELIGION complex LIES….with AMERICANS NOW NEXT UP!
ON THE JEWS’ GENOCIDAL CHOPPING BLOCK!

IF YOU THINK that OUR allegation that
the CIA, WAR DEPARTMENT, STATE DEPARTMENT, CON-GRESS, SENATE, White House and EVERY “u.s.” GOVT. AGENCY is IN BED WITH TERRORISTS, SUPPLYING THEM WITH POISON GAS to KILL CIVILIANS are outrageous…

JEWS LOVE KILLING CHILDREN!
IT’S RIGHT THERE IN THEIR EVIL BIBLE!TIME AFTER TIME AFTER TIME
the JEW PRIESTS & SCRIBES written “holy bible”
has  their “god” YAHWEH DIRECTING “his” JEWS
to SLAUGHTER, MASSACRE, EXTERMINATE
the men, women AND CHILDREN of  TARGETED FOR CONQUEST & DESTRUCTION CITIES!

YOUR TIME IS UP, America!  YOU’VE HAD  2 1/2 YEARS to CONFRONT the INSANE “deep state” TRAITORS who SEND TERRORIST DEATH-SQUAD KILL TEAMS to SHOOT-UP OUR CONCERTS, SCHOOLS, & PUBLIC SPACES….

INSTEAD OF DOING SO,  AMERICANS – like their COWARDLY BRITISH COUSINS – are DOUBLING-DOWN on JEW EVIL,


SELLING THE SAUDIS  **BILLLION$** in WEAPONS to KILL MILLIONS of YEMENI CIVILIANS WITH!


FOR TAKING JEW MONEY to HELP THE SATANIC ZIO-ARAB ALLIANCE WIPE OUT, EXTERMINATE WHOLE POPULATIONS…   YOU ARE NEXT UP!
on the GENOCIDAL JEWS terror-purges
EXTERMINATION MENU & chopping block!

AMERICANS, FOR GIVING the FBI, CIA, and their JEW MASTERS
2+ YEARS to  LYNCH-MOB the TRUMP presidency and AMERICAN NATIONALISTS……and for NOT PROSECUTING the  CHILD KIDNAPPING, RAPE, & CANNIBALISM RINGS which are SPILLING IN TO FULL PUBLIC VIEW almost daily!
–   YOU ARE LIVING ON BORROWED TIME!ONE   “false flag” NUCLEAR 9/11
– especially if it takes out President Trump –
and the INSANE SATANIC CHABADNIKS
and their ARMIES of  JEWS
& “shabbos goyim” HIRED-HAND
TRAITORS & APPARATCHIKS
WILL DECLARE MARTIAL LAW & START
“jade helm”ROUNDING UP or BLOCKADING (starving)
AND MASSACRING TENS of **millions**
of AMERICANS!!

how the “Deep State” = SATANIC JEW BILLIONAIRES and their FREE-MASONRY, SECRET SOCIETIES and  FINANCIAL COLLABORATORS  **ASSASSINATE**  **ANYONE** who gets in their way:
HYPNOTIZING = BRAIN-WASHING PATSIES
to be caught when PROFESSIONAL ASSASSINS
and MOSSAD GUNMEN pull the trigger…
but the MEDIA CAMERAS FOCUS
on the SET-UP PATSIES!

ASSASSINATIONS are
URGED ON & DIRECTED by
“the MONEY POWER“
OVER and ABOVE the “COMMUNISTS” –
i.e. the DEMORATS and their JEW BILLIONAIRE corp. MEDIA-MOGULS
funded, supported & directed   AGITATORS!

JEWS ARE and have been
ALREADY ON THE evil jew war-mob’s
HIT-LISTS! IF THEY OPPOSE the METASTASIZING JEW WARS and ON-RUSHING,  to-be nuclear 9/11 primed
RED TERROR PURGES war here in America…DAVID GOLDBERG RECENTLY KILLED by the WAR MOB
for WARNING that JEWS, israelis,
and TREASONOUS u.s. govt. officials in high places
WILL USE “FALSE FLAG” attacks
to JUSTIFY BOMBING & INVADING 70 million IRANIANS…
for FIVE MILLION LOUSY JEWS whose govt.
ATTACKED & KILLED AMERICANS on 9/11 2001 !!!