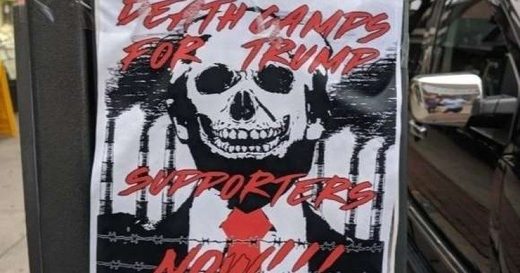 Fliers reading “Death Camps For Trump Supporters Now!!!” turned up at various locations throughout Long Island, N.Y., this week, including on Republicans’ homes and cars, according to Rep. Lee Zeldin (R-N.Y.).

Patch reported on Tuesday that a member of a “Shock Theater” group had photographed “multiple fliers” hanging near local businesses over the weekend, but he denied having anything to do with the fliers.

The company said it did not post the fliers and does not know who did. Workers at three businesses on the block told Patch they hadn’t noticed any fliers Tuesday.

A spokesman for Suffolk County police said they had not received reports of any fliers on street poles, but that fliers were reported on two vehicles last month. Police are investigating fliers left on vehicles parked on Oak Street in Patchogue stemming from July 25.

On Wednesday, Patch updated its story,reporting that the Shock Theater Collective had fessed up to distributing the fliers “as part of a promotional video for a show.”

A member of the Shock Theater collective, a group that creates haunted houses and horror scenarios that people can participate in, on Tuesday said the company was not responsible for hanging the fliers and that it did not know who hung them. On Wednesday, Liam Wallace, who now handles marketing for the company, acknowledged the company had, in fact, hung the fliers, and that the person was not aware of the show. That person no longer works for the collective.

In another Facebook post, Shock Theater directed the curious to an article at Haunting.net that promised to explain what they were trying to accomplish with the fliers.

The article is about Shock Theater’s special summer show, “We the People,” where guests play Trump supporters campaigning in the 2020 election before “everything falls apart.”

Will Puntarich, co-founder of Shock Theater, stressed that the show was not “a pro- or anti-Trump experience.”

He explained, “Trump is basically an atmosphere; this show is about the people living in that world and something happening that could or could not be prevented. It is the simulated real world.”

Rodney Montgomery, owner of The Shadows Haunted House, added: “I think I come from a politically moderate standpoint and Will is very clearly anti-government, which makes the show interesting because you, as a guest, get to see things from both sides. You won’t be shouted at by democratic social justice warriors, or be force fed pro-life, pro-gun rhetoric. You’ll be immersed completely in both camps, and will understand why the polarization of this country is so toxic. That’s why this show is important as an art piece, and a commentary on the modern political climate.”

In a comment on the above Facebook post, the Shock Theater proprietor told an irate critic: “We’re really well intentioned people using horror to bring a message of unity.” He added: “We’re not leftists here. Not by a long shot.”

He later explained that their former PR guy had posted the photos in response to far-left Trump-hater Reza Aslan’s insane comments on Twitter about “eradicating Trump supporters.” According to Shock Theater, the PR guy “was making fun of Reza.”

“We want unity. We want peace. Sometimes you need to tell a story to get your point across,” he said.

That may be, but in today’s media environment, where Trump and his supporters are routinely characterized as scourges on humanity worse than Hitler, distributing fliers advocating for their internment in death camps is maybe not the best idea?