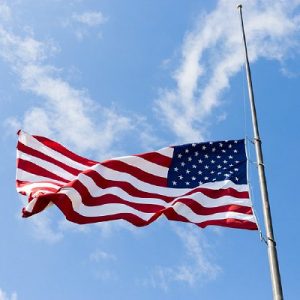 It seems like every time I think the left and the establishment media’s claims about the Trump administration couldn’t get any more outrageous, they do anyway.

The latest example of this came this week in the wake of two deadly mass shooting in El Paso, Texas, and Dayton, Ohio.

Leftists have had no issue blaming Trump for the El Paso shooting, claiming the president’s calls for a more secure border were reflected in the suspected gunman’s apparent hatred for immigrants.

On Monday, a former FBI official took things a step further, connecting Trump’s proclamation that America’s flags be flown at half-staff in honor of the shootings’ victims to neo-Nazi symbolism.

“The president’s either getting really good advice and rejecting it, or he’s getting really bad advice,” former FBI Assistant Director for Counterintelligence Frank Figliuzzi said Monday on MSNBC.

“We have to understand the adversary and the threat we’re dealing with, and if we don’t understand how they think, we’ll never understand how to counter them, so it’s little things and the language and messaging that matters,” he told host Brian Williams.

“Now I’m not going to imply that he did this deliberately, but I am using it as an example of the ignorance of the adversary that’s being demonstrated by the White House. The numbers 8/8 are very significant in neo-Nazi and white supremacy movement,” he said. “Why? Because the letter ‘H’ is the eighth letter of the alphabet, and to them, the numbers 8/8 together stand for ‘Heil Hitler.’”

“So we’re going to be raising the flag back up at dusk on 8/8. No one’s thinking about this. No one’s giving him the advice, or he’s rejecting the advice,” Figliuzzi said.

Now, this in and of itself is outrageous enough. Criticizing Trump for lowering the flags to honor victims of mass shootings seems like quite a stretch.

But Figliuzzi wasn’t done — far from it, in fact. And Williams simply egged him on.

“As chilling as that is to hear,” Williams said, “you’re saying it is possible that someone who knows better is authoring or editing the words that show up verbatim, or are supposed to be read verbatim by the president.”

Williams was referring to a speech Trump delivered Monday in response to the shootings.

The president directly addressed the El Paso shooter’s hateful manifesto and called on the nation to “condemn racism, bigotry and white supremacy.” That wasn’t good enough for Figliuzzi, who claimed Trump used the “passive voice” instead of personally condemning white supremacy.

“I’m concerned about who is writing his script and his speeches,” Figliuzzi said. “And what would fascinate me is what he’s rejecting. So it’s possible that several iterations of this speech were given to him.”

“Believe me, the expertise exists in our intelligence community and our law enforcement community and our civilian population on how to counter radicalization,” he said. “So those could have advised him on writing an excellent speech that would have created an obstacle on this path to violence that we’re on.

“But he either chose to not take that advice or he’s not even willing to solicit the advice.”

It’s clear this is all a bunch of conspiracy theory-filled nonsense. Figliuzzi may as well be saying, with a wink for good measure, something to the effect of, “I’m not saying Trump is a white supremacist, but someone in his administration may be. We can never know!”

I understand why folks like Figliuzzi love to link Trump to white supremacy. I don’t agree with it, but I know they’re just pushing the same, tired narrative.

But when they suggest presidential proclamations honoring mass shooting victims might be secret signals to white supremacists — well, that’s when they lose me.