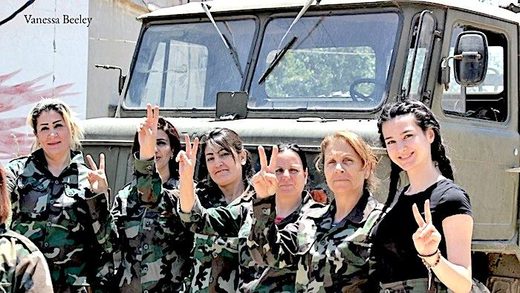 In this article I will specifically address the persecution of Syrian Christians by the extremist, sectarian groups who have been promoted, financed and armed by governments in the West, in particular the UK. I would like to make the strong point that Syrians fiercely defend their secular and diverse culture, that their faith or sect is secondary to their Syrian identity and patriotism.

I have focused on the fate of Christian minorities in Syria because of the recent hypocritical claims by members of the British government – their desire to “protect” the “most persecuted religious group in modern times” as Christians globally were described by former UK foreign secretary Jeremy Hunt, in the run-up to the leadership battle for the Conservative party, when Hunt traded campaign punches with eventual winner, Boris Johnson, whose election led to Hunt’s resignation.

In one statement prior to his leadership bid, Hunt said, “There is nothing more medieval than to despise someone on the basis of their faith.” Former British Ambassador to Syria Peter Ford gave me his response to this statement:

“Nothing more medieval? ‘Medieval’ is a good word to describe the ideology of these armed groups as they single out Christian villages on the edges of Idlib for merciless shelling. There must be a special place in Hell for hypocrites like Hunt and Johnson who feign concern for Christians while supporting vile jihadi groups in Syria.”

Indeed, Hunt and the British government have systematically ignored the plight of Syrian Christian communities. These communities have been specifically targeted since the dirty war against Syria began in 2011 and the Western-backed terrorist gangs have perpetrated sectarian hate crimes against all religious minorities across Syria, barely registered by Hunt prior to the recent UK government swing in favour of protecting Christians worldwide.

In fact, Peter Ford and Reverend Andrew Ashdown, who has regularly visited Syria in order to give a voice to Syrian faith leaders, both denounce the British government for its lack of inclusion of Syrian Christian clergy opinions. Ashdown told me:

Ford made the same point –

“Not only has the British government ignored Syrian Christians but it has tried to stifle their voice, by for example refusing visas for Syrian bishops to visit Britain just to put their case.”

Where, for example, are Hunt’s or Johnson’s condemnations of the massacre of civilians on a regular basis in the Syrian Christian towns of Al Sqeilbiyyeh and Mhardeh and villages in the surrounding countryside? These towns and villages are in the Syrian government-secured areas bordering Al Qaeda-dominated northern Hama and Idlib.

For eight years, these Syrian towns have been shelled and threatened with ethnic-cleansing invasion by the terrorist gangs marketed as “rebels” in the West and staunchly defended by Hunt and Johnson.

Women in these towns, wives, sisters, daughters of “martyrs” -the young men who have sacrificed their lives in the volunteer National Defence Forces to defend their communities against the sectarian hatred camped on their doorstep- have, themselves, taken up arms and trained as fighters to protect their people. The brutal gangs who would drive them from their homes and their land are, effectively, promoted and financed by the British government. As Ford says:

“It is the height of hypocrisy for the British government to affect concern for Christians when, in its obsession with overthrowing Assad, it has completely ignored the plight of Syrian Christians, who regard Assad as their sole bulwark against persecution. Worst of all, the British government continues to this day to support to the hilt jihadi groups in Syria.”

The British government has been invested in the “humanitarian” war against Syria from the outset. £2.81 billion has been poured into “humanitarian aid” projects, exclusively in areas controlled by the Al Qaeda-affiliates.

Meanwhile, the UK government is imposing brutal economic sanctions on the Syrian government-secured areas of Syria, collectively punishing the Syrian people for refusing to accept “medieval” extremist governance in place of their elected president and government. The Syrian people have been fighting to protect the “religious freedom” that the British government would see eroded by the armed groups they have supported.

The UK Foreign and Commonwealth Office (UK FCO) has blatantly financed elements of the terrorist support network, including the White Helmets, the Free Syrian Police and the so-called local councils, proven to be headed up by Al Qaeda militants in many cases.

Funding has ostensibly been given to “hospitals” and “medical centers” in terrorist-controlled Idlib without regard for the fact that most hospitals are very possibly requisitioned by the armed groups as military headquarters and detention-torture-execution centers for civilians and members of rival armed groups.

Distressing footage of the “moderate rebels” executing civilians publicly in Idlib was recently released by one of the opposition-biased documentation groups – these are the violent, brutal gangs that the British government is promoting and sustaining. Families of these executed young men claim that their “confessions” had been extracted under torture.

In a video statement made on August 5, Al Qaeda leader in Syria and Idlib, Abu Mohammad Al-Joulani, praises and promotes the White Helmets. This is not the first time this UK-intelligence “propaganda construct”, embedded with Al Qaeda, has been praised by the terrorist warlords.

In July 2019, Suzanne Der Kirkour, a Syrian Christian woman was tortured and raped repeatedly by Al Qaeda terrorists before being stoned to death in Yaquibiye, Idlib. Suzanne was 60 years old, she had asked the terrorists to leave her farmland which triggered this barbaric attack and murder. The criminal desecration of Christian property and churches in Idlib has been a longstanding strategy of the extremist groups and their White Helmets adjuncts.

So, when Jeremy Hunt and, subsequently, PM Boris Johnson “vow to protect persecuted Christians throughout the world,” how can they possibly justify their support for the sectarian savages that are ensuring a Christian exodus from Syria and the Middle East? Hunt has spoken of the percentages of Christians left in the Middle East –

“In the Middle East, the birthplace of Christianity, its followers have fallen from 20 percent of the population to just five.”

In Syria, the Christian population is reported to have been halved since 2011, from two million down to one million.

Well, Mr Hunt, the responsibility for this disastrous eradication of regional cultural diversity lies with your government and the other members of the US Coalition and its “humanitarian” war, who have enabled the persecution of these minorities by the terrorist groups they have armed and endorsed.

The British government has been accused, also, of bias against Syrian Christian refugees. The government reasoning for this bias has been that “only 0.2 percent of Syrian Christian refugees have relatives in the UK”. Meanwhile members of the Al Qaeda-affiliated White Helmets were given instant asylum in the UK after their exceptional evacuation out of Syria, facilitated by Israel. Did they have relatives in the UK?

In May 2019, Sajid Javid, Chancellor of the Exchequer, effectively offered 28 days’ amnesty for British terrorists fighting in Idlib. The same terrorists who will have ensured the continued persecution of Syrian Christians.

In December 2018, Hunt commissioned an independent investigation into the rise of “Christophobia” -led by the Bishop of Truro- which was recently published. Peter Ford condemned the report for its failure to criticize the government “for all the support they have given to armed groups in Syria guilty of persecuting Christians”.

Ford also points out that no credit is given to the Syrian government and Syrian Arab Army for their protection of Syrian Christian communities. His Excellency, Jano Battah, Bishop of the Syriac Catholic Church, has said publicly that “were it not for the SAA and Russia we would have been slaughtered.”

Ford points out the report’s emphasis on ISIS as the perpetrator of crimes against religious minorities in Syria while ignoring the atrocities committed by “lesser” armed groups sponsored by the British government:

“The report focuses too much on the FCO’s cautious attitude towards categorising certain actions of ISIS as genocide. I suspect that most Syrian Christians would say ‘So what?’ Peccata minuta, I think. It would have been far more to the point, and courageous, to upbraid the FCO for not even taking the welfare of Christians into consideration when deciding Syria policy.”

Boris Johnson has “welcomed this review” and claims that he will “stand up for those facing persecution”. Well, why not start by lifting economic sanctions against Syria and ending the promotion and financing of the sectarian terrorist groups and their auxiliaries that are persecuting the Syrian people? As William Wilberforce, MP, said to the House of Commons with reference to the slave trade in 1791 – “you may choose to look the other way, but you can never again say you did not know.”

About the Author:
Vanessa Beeley is an independent investigative journalist and photographer. She is associate editor at 21st Century Wire.