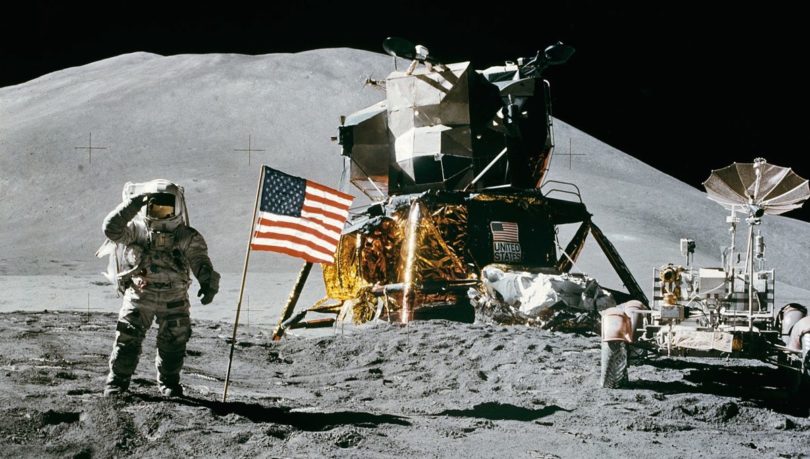 Let’s be very clear: it was technically and practically impossible for the National Aeronautics and Space Administration (NASA) to put a man on the Moon in 1969. The extremely advanced technology necessary to accomplish such a daunting feat was simply not available in America in 1969.

Bear in mind that it was only during the 1950s that black and white televisions were in use, and that it wasn’t until the mid-1960s that color broadcasting was introduced in the US.

The highly advanced science and technology required to put a man on the Moon with lunar rovers in tow was simply not developed enough at that time. CASE CLOSED!

What was highly developed was NASA’s intention to recklessly deceive the American people along with the world community of nations. The U.S. Federal Government was obsessively determined to be known for putting the first man on the Moon, even if it meant shamelessly faking the whole event, which they did.

For those who disbelieve the sheer depth and breadth of the scandalous fraud known as APOLLOgate, please view the 2 videos posted at the following link.

The overwhelming amount and high quality of indisputable evidence of APOLLOgatefraud presented in these two video presentations portrays a space agency that was totally out of control.

That NASA would perpetrate this transparent fraud over the course of 11 long years, from 1961 to 1972 is as shocking as it is inconceivable.

It has always been the case that NASA enjoys the least credibility — WORLDWIDE — of all US agencies, so it’s no wonder the ongoing APOLLOgate deception convinced the American people they landed 12 men on the Moon.

What NASA clearly failed to comprehend was the degree of scientific advancement in the realm of photo and video analysis that would take place from 1969 through 2019.

The technical analysis of both mediums is light years ahead of the 1960s and therefore the case of obvious fraud was a cinch for the forensic film investigators to break.

For example, even a six-year-old might perceive correctly that the astronaut pictured below could not possibly be so well photographed in astonishing white detail while descending the ladder IN THE SHADOW OF THE LEM (Lunar Excursion Module).

Such a photo is simply impossible and surely the NASA fraudsters did not care about that in 1969 (the photographers clearly set up special lighting in the “studio” to light up the astronaut like a Christmas tree). All they wanted to portray was a great shot of an astronaut touching the Moon’s surface. And so they did … but to such a great extent that they exposed their own ridiculous photograph fraud.

KEY POINT: It’s critical to understand that these Apollo manned missions to the Moon did not transport any lighting equipment since the additional weight and space requirements would have been too prohibitive.

Then there is this picture-perfect photo below of a reflection of Neil Armstrong in the face mask of Buzz Aldrin’s helmet. Again, there’s so much wrong with this photo it reeks with NASA deceit as the aforementioned videos make clear.

Perhaps the greatest challenge of putting a man on the Moon — ALIVE — was keeping three astronauts from dying from radiation exposure as they flew through the notorious Van Allen Radiation Belt.

Virtually every astrophysicist and astronomical engineer who has weighed in on this highly consequential matter has said the same thing: that the inordinately high level of radiation present in the Van Allen Belt is prohibitively and dangerously high. So high, in fact, that the traveling astronauts would probably not make it through and, if they did, would sustain serious injury to their bodies. For example, NASA released this video in advance of the Orion spacecraft being launched which warned of the well-researched dangers of the Van Allen Radiation Belt: NASA admits humans can’t pass through the dangerous Van Allen Belts (Video).

Not only is human life put into serious jeopardy as it travels through the Van Allen Belt, so was the equipment and electronic circuitry that were a necessary part of every Apollo Mission. The stark reality is that the VAB radiation would be intense enough to endanger the astronauts as well as knock out the vital spacecraft technology and communication equipment.

In light of these extreme and precarious circumstances, how, pray tell, did they ever land a man on the Moon?

Neil Armstrong: The first man on the Moon (NOT)

The public behavior of Neil Armstrong since he supposedly stepped on the Moon is a crucial piece of evidence in the APOLLOgate scandal. Why NASA selected an astronaut who was such an anti-social character to begin with was one of the biggest flaws in their scheme.

That Armstrong refused to avail himself to the media since day one is another damning clue. Why would the most famous person in world in 1969 do everything possible to avoid the expected and inevitable media attention? Not only that, but what few interactions Armstrong did have with the press were quite uncomfortable for both the viewer and Armstrong alike. Clearly, Neil Armstrong’s extreme guilt for faking the moon landing got to him—BIG TIME!

Let’s face it: when even Apollo 11 astronaut Buzz Aldrin said that “we never went to the Moon”, you know NASA has extremely serious problems containing the damage.

Russia has never landed a man on the Moon

Exactly why has Russia never undertaken a similar manned voyage to the Moon even though they were far ahead of the United States in the space race from day one.

Russia’s scientific advancement and technological development have always been way ahead of NASA’s; yet they never ventured to the Moon with a manned spacecraft.

There have been various Russian scientists, cosmonauts and astrophysicists who have been quoted over the years who have asserted the inherent dangers of such a risky launch. Some of them have referred to the Van Allen Radiation Belt as a particularly hazardous zone of space that could doom any attempt.

Because of the well-known competition to explore and dominate space, the Russians would have certainly accomplished a successful Moon landing by now IF IT WAS POSSIBLE.

However, they knew better at the Soviet space program in Moscow not to even attempt such an ill-fated trip to the lunar surface by their highly prized cosmonauts. To harm or kill these heroes of Russia would be an unforgivable crime.

The BOTTOM LINE here is that NASA never put 12 astronauts on the Moon, much less one.

Even FOX distributed an excellent documentary under the title Conspiracy Theory: Did We Land on the Moon? The highly qualified professionals who provided testimony for this film offered evidence that is irrefutable. It’s well worth watching this film because of how well it elucidates 3 crucial points that prove the Moon landing hoax. These points were made by Bill Kaysing, an analyst and engineer at Rocketdyne—the company that designed the Apollo rockets. The following statements are almost exact quotes from Kaysing and can be found in the preceding video documentary.

(1) There were no stars in the photos or video footage despite the clarity of deep space. Stars were completely missing from the dark black lunar sky.

(2) The American flag was waving even though there is no air on the Moon.

(3) There was no blast crater beneath the Lunar lander (aka Apollo Lunar Module).

APOLLOgate is the “The Greatest Conspiratorial Fraud Ever Committed by the U.S. Federal Government” against the American people. Truly, there’s nothing even close. Not 9/11. Not the OK City Bombing. Not even the apocalyptic BP Gulf Oil Spill.

Although the Apollo Space Program only cost $28 billion in 1960 dollars, adjusted for inflation in 2019 it would cost $288.1 billion. In either case, that’s a big chunk of change, especially for those who stole it from the American taxpayers.

Whenever a complex conspiracy is this deep and wide across vast stretches of US government bureaucracy, there are many who are on the take. Because the Apollo Space Program was a closely associated enterprise of the Military-Industrial Complex, the co-conspirators at the top of APOLLOgate can be found by tracing back from there to those who secretly own and operate the participating NASA-contracted corporations.

The obvious connections will always lead to the International Banking Cartel (IBC) which is forever looking for new ways to fleece the U.S. citizenry. Of course, at the very top of the IBC is the one furtive entity that has enjoyed virtual impunity as they have perpetrated their money-bilking schemes over many decades if not centuries—the Khazarian Mafia.

But why did they pull off a deception so obvious, to so many, and with so many profound consequences should they be found out?

Just like the very same bad actors assassinated JFK, RFK, MLK and Malcolm X and got away with it. They also murdered Marilyn Monroe, Judy Garland and Sharon Tate.

These same criminally insane psychopaths also did 9/11, the OK City Bombing, the BP Gulf Oil Spill and got away with them scot-free. There’s a LOT more they have gotten away with that is way beyond the scope of this APOLLOgate exposé.

However, where it concerns the wildly fraudulent Apollo Space Program (ASP), the perps at the very top had much more to gain in the realm of advanced space-based weaponry development. Even though they did not land a man on the Moon, the science and technology side of the ASP allowed them to covertly develop satellite-based weapons that they wanted (and needed) to achieve total world domination. And they did it, perhaps, by deceiving Russia and many other nations who were, and are, very concerned about being attacked from space. Witness the rapid development of the space programs now being run by China, India and other countries who are justifiably concerned about these crazies who run the asylum known as planet Earth.

Let’s understand that the chutzpah and deceit required to pull off this massive and complicated APOLLOgate fraud and cover-up is beyond anything normal Americans would ever try. In other words, only a certain TRIBE would attempt this unparalleled deception and grand theft. That alone provides an essential clue as to who was really behind APOLLOgate.

The New World Order globalist cabal had the most to gain by running this CON game on the American people. They especially benefited from all the innovative technologies that are now utilized in their global geoengineering regime. Many of these are used to weaponize the weather and effectuate climate engineering across the planet. Only in this way can the globalists hope to take total control of the Earth’s resources as well as exert complete control over the planetary weather patterns and meteorological events.

Full-spectrum dominance has always been the goal of those want to rule the realm. The Apollo Space Program substantially enabled the NWO cabal to get a leg up on all enemies, both real and perceived, in the pursuit of this nefarious objective. After all, a One World Government is the capstone of their New World Order, and ruling space will permit them to enforce the tyrannical edicts of such a totalitarian global empire.

APOLLOgate: What really happened on the Moon? (Video)

Was The Apollo 11 Moon Landing A HOAX Or Just The Filming Of It?