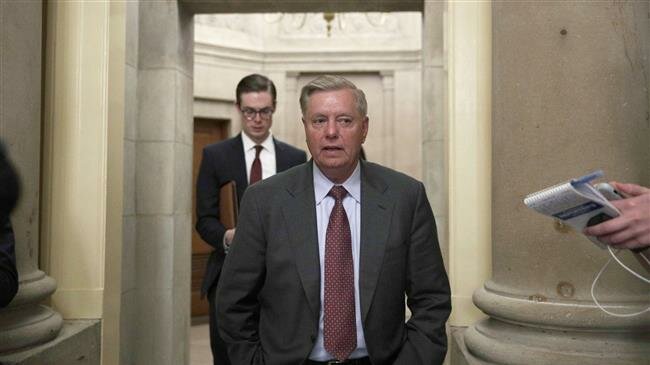 US Republican Senator Lindsey Graham’s warning to Donald Trump to not reduce the number of American troops in Afghanistan “looks like a threat on behalf of the Deep State” against the president, American journalist and political commentator Don DeBar has said.

In an interview with CBS’ “Face the Nation” on Sunday, the senator from the South Carolina said the US troop level should not go below 8,600, arguing that a large-scale withdrawal from the war-torn country could pose a grave threat to US national security.

“Mr. President, if you don’t have a counter-terrorism force left behind, even if you’ve got a deal with the Taliban — which I doubt, but you might — they don’t have the capability or will to protect the American homeland,” Graham said.

“I am concerned that the president, in his desire to get out, is going to make the same mistake that President Obama did in Iraq,” he added.

Asked by CBS host Margaret Brennan how many US troops should remain in Afghanistan, Graham said: “The number is gonna be around 8,600. To go below that I think would be really risky.”

Graham claimed that the US troops in Afghanistan are an “insurance policy against another 9/11,” alleging that the September 11, 2001 terror attacks took place because the US was not focused on Afghanistan.

The US currently has about 13,000 troops in Afghanistan.

Commenting to Press TV on Monday, DeBar said, “This looks more like a threat than anything else to me, a threat by Graham on behalf of the deep state against Trump, lest he dare think about fulfilling his campaign promise to put an end to these permanent wars. In essence, he’s saying that Langley created ISIS (Daesh) to thwart a pullout from Iraq and they’re ready to do the same in Afghanistan.”

“Now this has to be considered in the context of a power struggle between Trump and his circle on one hand, and the proponents of these wars on the other, and that against the timeline of the 2020 election and his second term if Trump gets reelected,” he added.

“Next year, they need him to keep their seats. Ask Senator Ted Cruz about that. After that, it’s all about impeachment votes in the Senate,” he said.

“Now consider the role Graham is trying to play, but in that context – think about the bloc of votes he represents in the Senate. And what he is doing in essence is telegraphing to Trump: ‘Hey, maybe you can pull out right now, but we can start that war any time, either during the election to tag you with another ISIS, or afterwards, and will impeach you at will after the election,” he noted.