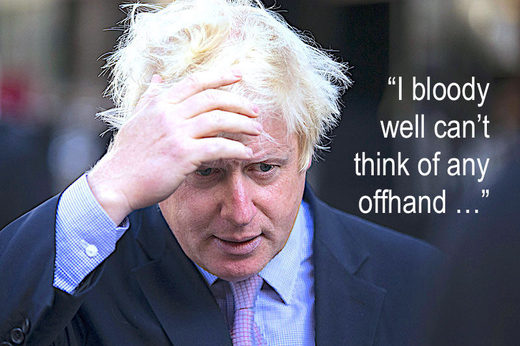 In 2019, merely being on first-name terms with a Russian makes a Western politician a pawn of Vladimir Putin, even if the Russian in question fled the country 15 years ago, and has an outstanding Moscow police warrant against him.

Catherine Belton, a former Financial Times correspondent in Moscow, has produced a truly exhausting 3,500-word investigation in search of a crime for Reuters. The subject of the special report is the relationship between UK’s likely next prime minister, Boris Johnson, and an exiled executive for long-defunct Russian oil giant Yukos, Alexander Temerko, though it is almost impossible to understand what the actual point of the piece is, beyond its insinuation that “MPs are increasingly wary of possible Russian influence over British politics.”

Russian diminutives as evidence of conspiracy

We learn that “Temerko rose to prominence in the Russia arms industry in the 1990s, in the wild days that followed the collapse of the Soviet Union,” though rather than the wheeler-dealer Lord of War picture this paints, the 57-year-old was actually a high-ranking government official, close to the administration of then-President Boris Yeltsin, and helped set up Russia’s post-Soviet arms exporter.

Switching over to the private sector, Temerko sat on the board of oligarch Mikhail Khodorkovsky’s energy company, and when the Yukos boss was charged with embezzlement, he stayed in Russia for two years, before fleeing in 2005, fraud charges hanging over him. Having convinced UK authorities that the accusations were politically motivated, Temerko was granted British citizenship in 2011, and has spent the past decade involved in Western energy businesses.

Once settled, Temerko resurrected his public life: he bid £90,000 for a bronze bust of David Cameron at a fundraising auction, and has contributed over £1 million to the Tories in donations, becoming the vice chairman of a local Conservative association in the process. This has enabled him to – in his own words – develop a close relationship with Johnson, who did take up his right of reply.

“Temerko spoke warmly about his ‘friend’ Johnson, telling how the two men sometimes call each other ‘Sasha,’ the Russian diminutive for Alexander, which is Johnson’s real first name,” writes Belton, who says she spoke to the Kiev-born businessman more than half a dozen times in the past three years.

The two men would apparently “‘plot’ late into the evening over a bottle of wine on the balcony of Johnson’s office at parliament in Westminster.”

So perhaps there is a story there. About how a man with money acquired through possibly unsavory means is able to wrangle his way into the highest echelons of public politics in the UK. Paying what is by the standards of Chelsea mansion owners are trifling donations, while having his stories of innocence believed unconditionally.

But that story wouldn’t sell, not least because none of the above is illegal or new, while Temerko is not some shadowy influence peddler, but has maintained a high-profile persona through newspaper columns and TV interviews. He isn’t even a foreigner in any legal sense.

So, to make it worth publishing, in vogue with current agendas, Temerko, a sworn enemy of the Kremlin who has publicly advocated for arming Ukraine to fight against Russia, has to be turned into an FSB asset.

But evidence is scant. Evidently, Temerko let his cover slip when he publicly called Nikolai Patrushev, “the hawkish head of Russia’s Security Council and former long-time head of the FSB security service… a ‘decent family man.'”

Worst of all, despite being an advocate for a soft Brexit (he is backing Jeremy Hunt, not Johnson for PM), Temerko has claimed that if the Conservative Party fails to take Britain out of the EU as it promised, “the time of the mainstream parties will end,” and “the old system will be destroyed.”

So rather than being the generic views of a middle-of-the-road Conservative, “those comments about a new political era chimed with remarks by Russian President Vladimir Putin,” because the Russian leader has said that a second referendum would shake faith in democracy.

James Wharton, a former Tory MP, is working as an adviser for Temerko’s energy company, and is also involved in Johnson’s party campaign.

So, what is Belton saying with her article?

That Temerko is some sort a sleeper agent who has now infiltrated the Tories? That Brexit-pushing Boris is doing the bidding of the Kremlin? Using Wharton? Is Williamson also working for Putin?

Because this is what Labour MP Ben Bradshaw, quoted in the article, seems to imply.

“We must have complete confidence that the close relationships between Conservative politicians and Russian business people with ties to the Putin regime are above board and free from Kremlin influencing operations.”

But how has the article demonstrated that the Kremlin has influenced anything?

The “special report” serves as yet another piece of evidence that in the current political climate, any Kremlin meddling story, however poorly sourced, xenophobic, counter-factual, or downright illogical, will be published. As long as you waffle on long and confusingly enough, your conspiracy theory will be picked up – and indeed dozens of prominent UK politicians and journalists retweeted the story with piled-on praise.

Johnson, Temerko, Hunt, and Williamson have got enough genuine personal flaws, misguided positions, and conflicts of interest that there is no need to invent additional smears for easy clicks.

About the Author:
Igor Ogorodnev is a Russian-British journalist, who has worked at RT since 2007 as a correspondent, editor and writer.