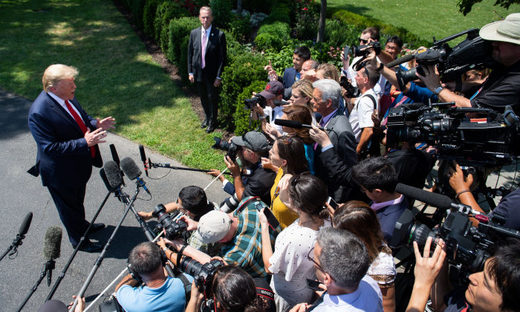 President Donald Trump on July 30 accused Rep. Elijah Cummings (D-Md.) and other Baltimore politicians of wasting and stealing billions of dollars sent to the city in federal aid.

“It’s been misspent. It’s been missing. It’s been stolen with a lot of corrupt government. And as you know, Cummings has been in charge,” the president told reporters on the White House lawn.

“I think that Representative Cummings should take his Oversight Committee and start doing oversight in Baltimore. He’d find out some real things,” Trump added.

Cummings’ office didn’t immediately respond to a request for comment. Following Trump’s remarks, Cummings shared a pair of opinion pieces on his Twitter account. One is titled “Trump Attacks on Baltimore, Cummings Become Political Litmus Test, with Democratic Presidential Debates Ahead,” and the other is titled “Elijah Cummings Is No Racist.”

Trump’s accusation is the latest in a war of words with Cummings that has lasted for days. It began with the president’s comment on July 27, calling Cummings a “brutal bully” for shouting at federal immigration authorities about the conditions on the southwest border with Mexico. The president said that the conditions are far worse in Cummings’s district, calling it “a disgusting, rat and rodent-infested mess.” Cummings responded to the criticism by saying he fights for his constituents.

Cummings’s district received $16 billion in taxpayer money in 2018, according to Lynne Patton, the regional administrator for the Department of Housing and Urban Development.

“We have given more money in homeless funds to Baltimore than the last administration. We have given more money in community development grants than the last administration to Baltimore,” Patton told Fox News. “My question to you guys is this: What are you actually doing with the money so that it benefits residents in the community for once, instead of deep-pocket crooked politicians?”

In remarks to reporters on the White House lawn on July 30, Trump said, “Baltimore has been very badly mishandled for many years,” and pointed to the city’s former mayors.

Mayor Sheila Dixon, a Democrat, was convicted of misappropriating gift cards in 2009 and resigned in 2010. Mayor Stephanie Rawlings-Blake, also a Democrat, announced that she wouldn’t run for re-election in 2015 after criticism of her handling of the unrest following the death of a man injured in police custody. Catherine Pugh, yet another Democrat, resigned as mayor in May, one week after the FBI raided two of her homes amid controversy surrounding a $500,000 payment she received from the University of Maryland Medical System to publish children’s books.

Trump said the White House has received “thousands” of calls from Baltimore and other cities thanking him for bringing attention to the poor conditions and claims of corruption.

“The White House and myself … have received more phone calls than I think on any other subject of people from Baltimore and many other cities corruptly run by Democrats thanking me for getting involved. Those people are living in hell in Baltimore. They’re largely African American. They have a large African American population. And they really appreciate what I’m doing and they’ve let me know it,” Trump said.

Democrats and establishment media outlets continue to interpret Trump’s comments about Cummings as “racist,” but offer no evidence for the claim. Trump said on July 30 that he is “the least racist person there is anywhere in the world.” The president also touted his administration’s achievements for African Americans, including the historic-low unemployment among African Americans, the creation of opportunity zones that attract investments to low-income areas, and the enactment of criminal justice reforms.

“What I’ve done for African Americans in two and a half years, no president has been able to do anything like it,” Trump said.

“Ms. Rockeymoore Cummings’s nonprofit has paid significant management fees to her own for-profit company and she has been paid directly over $200,000,” Kendra Arnold, the executive director at the Foundation for Accountability and Civic Trust, wrote in a letter (pdf) to Frosh.

Frosh’s office didn’t respond to a request for comment.

Cummings is the head of the House Committee on Oversight and Government Reform, one of several Democratic-led committees conducting inquiries targeting the president, his family, his past business dealings, and current and former White House staff. The president’s criticism of Cummings stems partly from these inquiries, which he believes are a waste of time.

According to a July poll (pdf) by Morning Consult, 17 percent of black voters approve of Trump’s job performance. Between 1980 and 2004, Republican presidents received between 8 percent and 12 percent of the black vote, according to a report (pdf) by the Joint Center for Political and Economic Studies. That percentage declined to 4 percent and 6 percent during the two elections when President Barack Obama was on the ballot.

Pastor Mark Burns, who supported Trump during the 2016 presidential election, told The Epoch Times that Democrats who keep accusing Trump of racism will help the president’s re-election in 2020.

“It’s one of the greatest things that they can do because there’s no substance to it. The more they cry racism, the more they guarantee Donald Trump is going to be re-elected for four more years,” Burns said. “People see through the foolishness.”