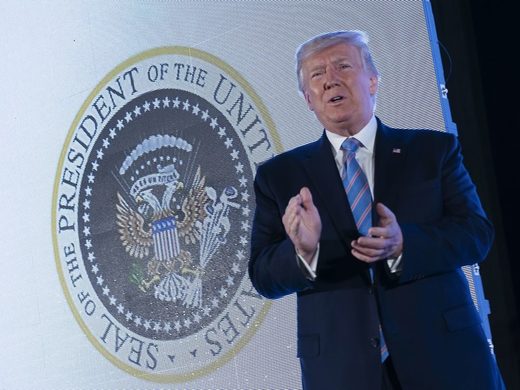 At first glance, there was nothing unusual about U.S. President Donald Trump’s introduction Tuesday at Turning Point USA’s student summit. In many ways, it mirrored the production style that has become synonymous with Trump’s campaign rallies.

Following a 12-minute video illustrating Trump’s rise to the presidency, music blared as the president’s name flashed across a giant screen in a bold shade of red. Trump took the stage and soaked in the raucous cheers from hundreds of young supporters packed inside the Marriott Marquis in Washington.

Charlie Kirk, Turning Point’s outspoken founder and president, was on his left. But the image on the screen to Trump’s right — captured in dozens of photos and videos from the event — is less familiar.

The image almost resembles the official seal of the president; but a closer examination reveals alterations that seem to poke fun at the president’s golfing penchant and accusations that he has ties to Russia.

The eagle has two heads instead of one — a symbol historically tied to empire and dominance. It closely resembles the bird on the Russian coat of arms, and also appears on the flags of Serbia, Albania and Montenegro. Its left talons, rather than clasping 13 arrows, appear to clutch a set of golf clubs.

On the official presidential seal, the eagle’s mouth famously clinches a banner with the U.S. motto “E Pluribus Unum.” It was not clear from photos and video if the words on the parody eagle’s banner were altered as well.

The origins of the knockoff are murky. A projection of the true presidential seal was centered behind Trump’s name as he walked onstage. The true seal was also on the podium where the president spoke for 80 minutes.

A White House spokesperson told The Washington Post they had not seen the seal before it appeared on screen, and referred questions about the incident to Turning Point.

In a phone interview Wednesday, a spokesman for the conservative group said he didn’t know where the altered seal came from or how it ended up on a screen behind the president. He said the mistake likely came from the team that handled the event’s audio and visual production.

“I don’t know where they got the image from,” he added.

According to Turning Point, the audio/visual team helped create and coordinate the graphics, images and videos displayed at Tuesday’s event – including the official seal shown behind Trump’s flashing name on-screen.

The Turning Point spokesman said the team was made up of staff from his organization and from the hotel. On Wednesday evening, he was still working to determine who, exactly, was responsible.

“Somewhere there was a breakdown. I think it was as simple as a rushed move throwing up an image, and it was the wrong one,” the spokesman said, adding it was unfortunate that the faux seal drew attention away from the event’s star-studded lineup of conservative speakers. “It was an A/V mistake . . . it certainly wasn’t our intention.”

Employees at the Marriott Marquis say the hotel generally does not furnish images or video for groups hosting events there. The venue only provides the space and the technology, such as televisions and projectors. The hotel’s event manager who helped coordinate the summit did not return multiple phone messages requesting comment Wednesday.

Richard Painter, who served as the chief White House ethics lawyer for President George W. Bush from 2005 to 2007, said the president’s staff should typically have advanced knowledge and command over images and video displayed at events where the president appears.

He called the incident “careless.”

“You should have control over what the private group is doing, what they’re putting on the screen and anything else,” said Painter, now a law professor at the University of Minnesota. “To let someone project something on the screen that isn’t controlled by the White House is pretty stupid.”

A congressional statute indicates that the presidential seal may not be used to falsely suggest sponsorship or approval by the U.S. government, but Painter and other legal experts say parodies of the seal are protected under the First Amendment right of free expression.

The bird on the doctored seal closely resembles the shape of the double-headed eagle that has been Russia’s coat of arms for centuries. It appears on some former renderings of the country’s flag and figures prominently in the jerseys of Russia’s vaunted national hockey team.

The set of club’s in the eagle’s claw are likely a tribute to Trump’s well-documented golf habit. The Post previously reported that by October of last year, the president had visited his golf course in Virginia more than 40 times, and spent all or part of more than 70 days at his golf club in Bedminster, New Jersey.

In May, the HuffPost reported that Trump’s golfing cost taxpayers more than $102 million in travel and security expenses. This comes despite the fact Trump frequently censured Barack Obama for his love of the sport – he tweeted at least 27 times that Obama played golf too much. On Saturday, Trump made a surprise appearance at a wedding ceremony held at the Bedminster location.

The two-headed eagle also appears at the bottom of the logo for Turnberry, Trump’s luxury resort and golf course in Scotland.

For Kathleen Clark, a law professor at Washington University, the fact that a doctored seal mocking Trump was allowed to appear behind him as he walked onto a stage was equal parts stunning and perplexing.

“It’s hard to believe . . . who did this?” she said. “Was someone at Turning Point trolling Trump? I just think Putin would probably approve.”