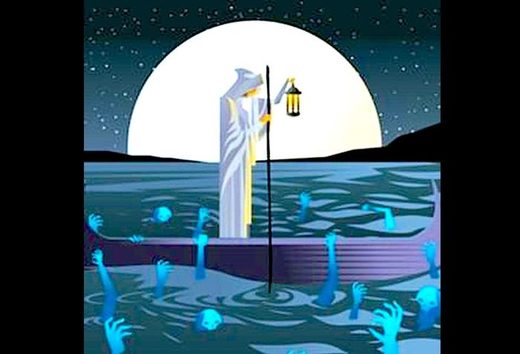 “Never before has a criminal phenomenon enjoyed widespread international support by governments, political parties, religious and civilian organizations, popular opinion, and never before has a sovereign state renounced to exercise control over its borders.”

These opening words by Gianandrea Gaiani are a fitting introduction to Francesca Totolo’s latest book Inferno Spa. Gaiani is no stranger to the business of illegal immigration, being an author of several books on the subject. He was interviewed by Gefira in 2017 when the Italian government was then still a center-left pro-migrants coalition. Totolo has agreed to an exclusive interview for Gefira and we recently met her in Florence, where she was presenting her new book.

Francesca Totolo is a freelance investigative journalist and collaborates with a variety of Italian and international press agencies and websites. Her investigations have been published both in Italy and abroad. We could easily call Totolo a diligent – and outspoken – journalist as her new book, which she wrote with Dante’s Inferno in mind, involves just that: solid, painstaking, diligent research and fact-checking. The result is the equivalent of an encyclopedia of who’s who in the business (Spa is the Italian acronym for joint-stock company, equivalent of the German AG) of the immigrants’ industry, an industry which moves an unending flow of human beings and money.

She has divided her book into different sections, entitling them with some of Dante’s appellatives in his Divine Comedy: first the ferrymen orCharons who deliver thousands of human beings to the other bank, then the hypocritical NGOs followed by the traitors to the country at all levels, sided by the omnipresent politically correct mainstream media and well-funded organizations of all sorts.

All these infernal characters have in the end one Master Mind, who acts like a modern and nefarious Virgil: George Soros and his mind-boggling network. Totolo is ready to point out, at the conclusion of her book, that Soros is himself an actor, albeit of the highest level, lending his face to higher “movers and shakers behind the curtains”, who have already decided that the original European population must be replaced.

GEFIRA: How long have you been working on this subject and what are your primary sources?

FT: Actually my interest was sparkled by the initial articles of Gefira (late 2016 – early 2017) that documented without a shred of doubt the smuggling of immigrants. The book is therefore the product of two years’ research. Since then I have been reviewing one-by-one these NGOs, their websites, and even asking them directly to disclose information, especially about their finances: needless to say I have been faced with the utmost denial, or, at best, with strictly sanitized reports which said nothing about their financial sources. What struck me about some of these NGO websites is that they put themselves above the law, with absolute certainty of impunity.

GE: What about the so-called mainstream media, the big newspapers: what about their sources when they write about this topic?

FT:Their main sources are the press releases from the NGOs themselves. Do you need to say any more than that?

GE: What – in your opinion – do all those NGOs have in common?

FT:All those international NGOs such as Avaaz, Oxfam, Amnesty International, Human Rights Watch and many others have certainly one thing in common: their financial source, which is Soros. Their role has been, and continues to be, making the Italian people feel guilty if they don’t accept immigrants: legal or illegal, they must be accepted no matter what. So these NGOs, or modern Charons as I like to call them, have effectively – directly or indirectly – smuggled into Italy something like 700.000 people over the last few years. It must be understood, by all means, that something like this is a planned operation since its very beginning.

GE: Which is when, in your opinion?

FT:Let me just say that: as early as 2008 the association “carta di Roma” was founded in Rome. It can be considered the first NGO directly financed by Soros in Italy. What is the purpose of this “association of journalists”? To “promote correct information about immigrants, refugees, asylum-seekers in Italy”. Doesn’t that make you inevitably think that Soros knew as early as 2008 what would happen three years later in Libya and was therefore paving the way for a “change of the paradigm”?

GE: What about the galaxy of Italian NGOs financed by Soros?

FT: I put them in my book among the traitors to their own people. One of them certainly stands out: ASGI.

GE: What is ASGI?

FT: I like to call ASGI the judiciary arm of Soros in Italy. ASGI (Associazione Studi Giuridici sull’Immigrazione) works not only to promote new pro-immigrant legislation, but to effectively counteract – by legal means – every law-enforcing measure by the Italian governmentwith a plethora of appeals which are a stranglehold on the judiciary system, rendering it notoriously slow. They even succeeded in passing into law the right for every newborn, regardless of his legal status, to receive an 800-euro bonus from INPS, the Italian welfare agency. They also went so far as to defend in court multiple convicted criminals preventing their deportation to their countries of origin. And, as I have found out, Italian NGOs like ASGI are part of an international network of NGOs such as ENAR.

GE: What is ENAR?

FT: ENAR stands for European Network Against Racism, comprising various NGOs and associations. A network which receives funds not just from Open Society but also from the EU and from an American NGO, the NDI (National Democratic Institute), directly financed by the US government through the notorious and omnipresent USAID agency. All these agencies contribute to creating what we could call Orwellian newspeak.

GE: What do you mean by that?

FT:The aforementioned press association “Carta di Roma” now “recommends” that any possible reference to the ethnic origin of a criminal be removed from a published article. As a journalist, you could be now facing even criminal charges for using words such as “clandestine” or “Gipsy”, and the sole mentioning of the nationality of a criminal is “highly discouraged”. All of which is the creation and enforcing of newspeak.

GE: Newspeak that has to be implemented by the press and by compliant politicians devoted to the cause. Which Italian politicians do you name in your book?

FT: I could not start this list without naming Emma Bonino. She can be considered by all means Soros’s right-hand agent in Italy. She has founded “Più Europa” (more Europe), a party which receives direct funding from Open Society. It speaks volumes.

GE: What about former prime ministers such as Matteo Renzi?

FT: While conducting research with Luca Donadel, another investigative journalist, I made an interesting discovery of a 2015 secret deal that Renzi in his capacity as PM of the Italian government made with Ireland and Malta, and which was prolonged by his successor Gentiloni. It lasted, for what we have been able to find out, at least until 2017. It was called operation Pontus.

GE:Pontus reminds us vaguely of a bridge, doesn’t it?

FT: A bridge operated by the Irish Navy with at least six different military ships and most likely paid – unknowingly – by the Italian taxpayers!This discovery can be dated back to the summer of 2017 when, together with Donadel, I noticed an Irish military vessel that was calling on a regular basis at Sicilian ports. What made us suspicious of all this was the fact that the Republic of Ireland was at that time no part of Operation Frontex, the Italian coordinated EU SAR (Search and Rescue) task force. This activity was not mentioned at all by the Italian press altogether. The Irish did, however, provide an answer to our enquiries, without any reluctance.

GE: And the answer was?

FT: That the Irish Navy was indeed engaged in SAR operations under a bilateral agreement with the Italian government signed in May 2015, then renewed in 2016 and 2017. The official statement released by the Irish Department of Defence made clear that the Irish Navy was operating in strict collaboration with the Italian authorities. Then suddenly the Irish became tight-lipped: they stopped answering my inquiries about the financing of this somewhat secret operation. Why this sudden reticence? My guess is that Renzi and Gentiloni had their own SAR operation financed by the unaware Italian taxpayers, and the Irish felt uneasy about disclosing what was really going on. It later turned out that this was not the only secret operation conducted by the Italian government.

GE: What else was going on?

FT: In July 2018 the leader of the opposition to the Maltese government, Arian Delia, revealed the existence of a secret deal dating back to 2014between Renzi and Malta’s PM Joseph Muscat. Delia mentioned nothing less than a contract between the two: Malta would grant Italy oil exploitation rights in Maltese waters in exchange for not allowing SAR vessels to unload immigrants in Maltese ports.

GE: Any comments on this from the two governments?

GE: What about other Soros-friendly Italian politicians worth mentioning?

FT:Emma Bonino with her decades-long friendship with Soros actually opens quite a long list. There are at least fourteen Italian members of the European parliament classified as Open Society’s “reliable allies”. This was made public by hackers who rummaged Open Society’s server. Then Soros can always count on “old buddies” in Italian politics such as Romano Prodi, who in 1995 went so far as having the University of Bologna confer an honorary degree in Economic Sciences on Soros, a man who had pocketed only 3 years earlier an equivalent of today’s 8 billion euro speculating against the Italian lira! In the following – 1996 – year Prodi became prime minister and in 1999 president of the EU commission. But, of course, these are just mere coincidences.

GE: Last but not least. May we have your opinion on the current events in Libya and their potential danger for a new wave of migrants to Europe via Italian shores?

FT: What should make every Italian worry about the situation in Libya is that it resembles dramatically that of 2011: a divided Italian government unable to make any real mark on the international scene, a variety of countries always ready to maneuver against Italy for their own national interests.

GE: Who stands out among these countries?

FT: France, no doubt. France is certainly not willing to lose any of her economic interests it has in Libya. France effectively removed Qaddafi in a joint operation with the US in 2011, which led to the complete destabilization of the country and the consequent biblical mass migration of sub-Saharan Africans. It may happen again if Libya is thrown into a full-scale civil war. There are unconfirmed reports of numbers such as 800.000 people ready to get on the move toward Europe. I have reports that the same obsequious NGOs which I mentioned in the book are pressuring for the opening of “humanitarian corridors” to Europe treating any immigrant as a “refugee”. The situation is indeed volatile and we must hope that the current Italian government will remain steady on its course of keeping the ports closed.

GE: As always, there are plenty of sharks out there ready to make their best fishing in murky waters.