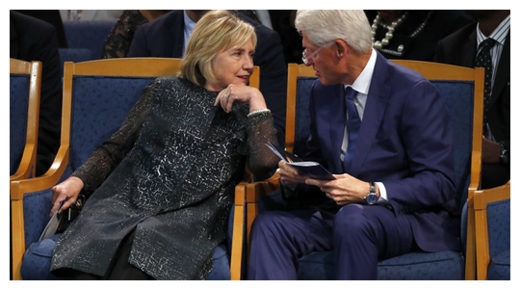 The former first lady has been a target among opponents for her numerous suspected crimes including alleged pay-to-play machinations during her tenure as secretary of state, and controversy over her use of a private email server during her time in office.

Activists from Equal Justice Tour, a religious political action group petitioning to have Hillary Clinton “be held accountable” for her alleged “wrongdoing at the Clinton Foundation, Benghazi, Haiti, Email Destruction and Uranium One,” have filed a formal complaint with the New Castle Police Department in Chappaqua, New York State, where Clinton has a residence.

On Saturday, the activists live-streamed a video on Facebook showing members of the group walking into the police station and handing over notarized copies of the complaint to an officer. The officer said he would forward the document to his superiors.

“Some of us are veterans, and we swore to defend the Constitution from domestic enemies,” one of the activists said, noting that as a public servant, Clinton “should be held accountable, so now we’re looking to hold her accountable.”

The group had previously claimed that since Clinton’s private server was reportedly based at her Chappaqua home, authorities there were responsible for arresting her. The group’s activists have staged multiple campaigns including protests and internet petitions encouraging President Trump to arrest the former presidential candidate in the past.

During a debate and on the campaign trail in 2016, Trump threatened to put Clinton “in jail” if he was elected.

Clinton’s decision to use a private email server during her tenure as President Obama’s Secretary of State between 2009 and 2013 has led to questions about why she chose not to use a traditional ‘state.gov’ email system. In 2017, documents turned over to Judicial Watch by the State Department revealed examples of what appeared to be ‘pay-to-play’ politics, where the secretary of state would receive donations to the Clinton Foundations seemingly in exchange for things like government appointments, policy positions, and government contracts.