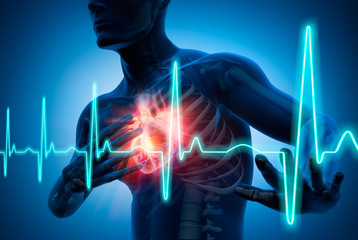 As if we aren’t being tracked, recorded, and monitored enough, the Pentagon now has a laser that can identify a person by their heartbeat. Your heartbeat is going to be a lot harder to hide than your face…

So when is enough surveillance enough? Apparently, there’s no line the government can cross that will rile up the masses. We’ve got facial recognition in airports and schools, cars that can be unlocked just by looking at them, technology that can detect a person’s unique way of walking, and of course the ubiquitous fingerprint, used for everything from smartphones to event ticketing. Next on the agenda…Your heartbeat, according to an article written by Engadget.

As MIT Technology Review reports, the Pentagon has developed a laser that can identify people from a distance by their heartbeat alone. The technology, known as Jetson, uses laser vibrometry to identify surface movement on the skin caused by a heartbeat, and it works from 200 meters away.

Everyone’s cardiac signature is unique, and unlike faces and fingerprints, it can’t be altered in any way. As with facial recognition and other biometrics which rely on optimal conditions, though, Jetson does have a few challenges. It works through regular clothing such as a shirt, but not thicker garments, such as a winter coat. It also takes about 30 seconds to collect the necessary information, so right now it only works if the target is sitting or standing still. And, of course, its efficiency would also depend on some kind of cardiac database. Nonetheless, under the right conditions, Jetson has over 95 percent accuracy. –Engadget.

This would mean the Pentagon’s goal is to create a cardiac database of everyone’s heartbeat in order to monitor, track, and surveil all of us. Orwell’s future looks better than what we’re going to be experiencing. Official documents from the Combating Terrorism Technical Support Office (CTTSO) suggest this has been in the works for some time. However, it could have other applications as well.

Proponents say that this could help doctors wirelessly monitor patients, and it may very well be sold to the public as such using propaganda.  However, if history is any indication, this will be used as a tool of mass surveillance just like our smartphones are now.

Move over facial recognition! The government is going to soon track us by our cardiac signatures!