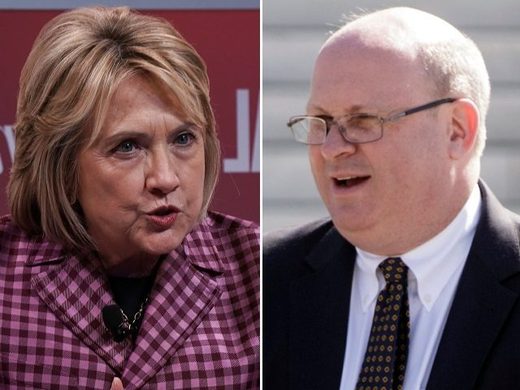 Fusion GPS went on to hire British ex-spy Christopher Steele, who compiled an unverified dossier allegedly based on sources close to the Kremlin which was disseminated to the media and used by the FBI to obtain Foreign Intelligence Surveillance Act warrants targeting former Trump campaign associate Carter Page. Justice Department Inspector General Michael Horowitz is reviewing alleged FISA abuse related to the dossier and Attorney General William Barr launched his “investigation of the investigators” earlier this year.

Clinton’s former presidential campaign manager Robby Mook said in 2017 that he authorized Elias to hire an outside firm to dig up dirt on Trump’s connections with Russia. “I asked our lawyer and I gave him a budget allocation to investigate this, particularly the international aspect,” he said.

Mook said Elias was receiving information from Fusion GPS or directly from Steele himself about the research into Trump and Russia in 2016, and that Elias then periodically briefed the Clinton campaign about the findings.

“We were getting briefings that were put together by the law firm with information,” Mook said. “I’m proud that we were able to assemble some of the research that has brought this to light.”

“I’m just glad that it’s coming out now and I’m glad that there was research there,” Mook said.

Watchdog groups allege that Hillary for America purposely concealed the hiring of Fusion GPS and Christopher Steele by reporting all the payments that it made to Perkins Coie as “legal services” without mentioning opposition research. Perkins Coie was paid over $12 million between 2016 and 2017 for its work representing Clinton and the DNC. According to its co-founder Glenn Simpson, Fusion GPS was in turn paid $50,000 per month from Perkins Coie, and Christopher Steele was paid roughly $168,000 by Fusion GPS for his work.

Perkins Coie admitted in an October 2017 letter that it had hired Fusion GPS, claiming that “Fusion GPS approached Perkins Coie” in March 2016 with the knowledge that Perkins Coie was representing Clinton and the DNC, and that Perkins Coie then “engaged” Fusion GPS from April of that year until just prior to the November election “to perform a variety of research services during the 2016 election cycle.”

Elias himself personally “retained Fusion GPS … to conduct the research” and did so “on behalf of the Clinton campaign and the DNC,” according to a report from the Washington Post.

Brian Fallon, the former national press secretary for the Clinton campaign, previously defended Elias. “Marc is known as one of the most skilled professionals in Democratic politics, in addition to being the party’s top election lawyer,” Fallon said in 2017. “I am damn glad he pursued this on behalf of our campaign and only regret more of this material was not verified in time for the voters to learn it before the election.”

Neither the Harris campaign nor Elias responded to the Washington Examiner‘s request for comment.