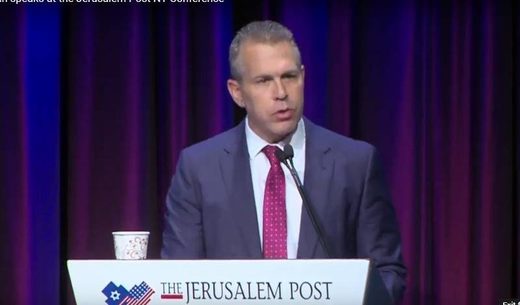 Gilad Erdan, minister for strategic affairs and information under Benjamin Netanyahu, addressed the Jerusalem Post conference in New York two weeks ago, and bragged that the Israeli government had taken its fights “to the enemy,” and that includes BDS.

When I was charged with leading this fight, BDS leaders operated freely and were largely successful in disguising themselves as human rights organizations… We tore off their masks. We exposed their ties to terror, we exposed their deeprooted antisemitism, we exposed their opposition to peace, and we exposed of course their hypocrisy. They couldn’t care less about the real human rights violations, for example in Syria and Iran. All they care about is demonizing and delegitimizing the world’s only Jewish and democratic state.

Our efforts are producing results. 27 US states now have counter-BDS legislation. Let’s give a hand to all the governors and state legislators who supported this law. They deserve it.

The minister cited a report he produced called “Terrorist in Suits” that aims to show that supporters of BDS include some Palestinians convicted of being members of terrorist organizations- ergo BDS is a haven for terrorists. Now “BDS is on the defensive,” Erdan said.

But Israel and its “friends” in the audience must push for even harsher laws in the U.S.

We need to take the fight against BDS to the next level. We must encourage investigations of terror-linked BDS groups and promote legislation that counters all forms of anti-Semitism including of course the anti-Semitic delegitimization of Israel.

So it is a huge scandal that Russia interfered in the 2016 election but Israel is messing in our politics all the time, and that’s standard operating procedure.

Remember those Facebook ads from Russia? Part of Erdan’s effort is establishing and leading “a global community of advocates,” more than 100 bloggers around the world who counter efforts to delegitimize Israel on the internet. These advocates explain the ancient Jewish connection to the land, etc.

On a related note, at the same time that advocacy for boycotting Israel is being punished/circumscribed in the U.S., other boycotts are promoted by progressives. Here is Kareem Abdul-Jabbar in the Hollywood Reporter calling this week for boycotting Georgia, Alabama, and Missouri for passing abortion bans that he says have the effect of marginalizing powerless groups.

Abdul-Jabbar notes the virtues of boycotts.

A boycott is a clear statement that we value conscience over commerce. It means stop doing business with or in these states. For Hollywood, stop making films there. For businesses, stop buying their products or holding conventions or building there. For the average person, don’t visit. No tourism dollars. And we continue this practice until legislators reverse the policies or are removed from office.

And he acknowledges that they cause pain (as boycotting Sodastream cost some Palestinians their jobs), but that’s inescapable. Even in Montgomery in 1955.

Boycotts cause hardships to the innocent as well as the guilty. That’s the whole point. Hardships motivate the self-righteous leaders to face the consequences of their political greed. A boycott’s success depends on the commitment of those seeking change to endure suffering. Rosa Parks’ arrest in 1955 kicked off the Montgomery Bus Boycott in Alabama that lasted a year and led to great hardships for whites and blacks. One of the boycott’s leaders, 26-year-old Rev. Martin Luther King Jr., had his home firebombed. The bus company suffered financial setbacks that affected its employees and other businesses. The black boycotters, who were 70 percent of the buses’ ridership, also suffered. For a year, they walked or carpooled until they were triumphant.

Thanks to Allison Deger.