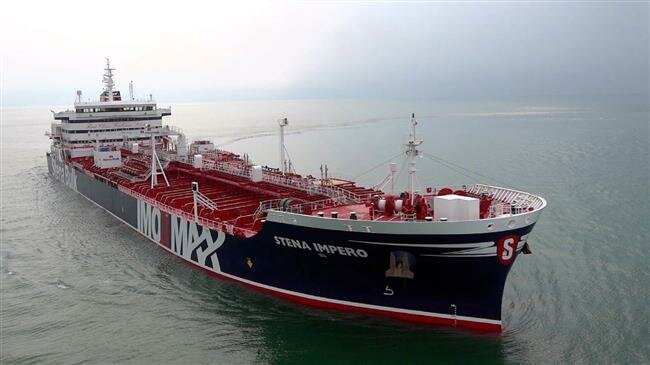 Iran has released footage of a British-flagged oil tanker which was impounded in the Strait of Hormuz after it ignored distress calls.

The footage shows Iranian speedboats cruising near Stena Impero tanker as a military helicopter is flying over the vessel.

An Iranian marine could be heard communicating with the command center in the southern port city of Bandar Abbas.

Masked Iranian commandos then rappelled onto the deck of the tanker from the helicopter. The name of the ship can be seen in the video.

Earlier on Saturday, Allah-Morad Afifipoor, head of Ports and Maritime Organization in southern Hormozgan Province, said the 30,000-tonne UK-flagged Stena Impero tanker had “collided with a fishing boat on its route and, according to law, after an accident it is necessary that the causes be investigated.”

Following the collision, those on board the fishing boat “contacted the British vessel but didn’t receive any response,” so they informed the Hormozgan maritime organization, “according to the legal procedures,” he added.

Afifipoor also noted that the tanker had been taken to Bandar Abbas port, where it and its crew will remain while a probe is carried out into the British vessel’s conduct.

PressTV-UK tanker hit Iranian boat, ignored distress call: OfficialIranian authorities say the British oil tanker seized in the Strait of Hormuz was in an accident with an Iranian fishing boat and ignored its distress call.

The tanker was not carrying any cargo, he said, adding that the crew members of the ship may be interviewed on technical matters.

“The investigation into the cause of the accident has been started today,” he said. “All its 23 crew members will remain on the ship until the probe is over.”

“If necessary, and at the request of judicial authorities, the crew may be summoned for technical and specialist interviews,” Afifpoor added.

Iran’s Islamic Revolution Guards Corps (IRGC) impounded Stena Impero on Friday while it was passing through the Strait of Hormuz en route to Saudi Arabia. It was seized “for failing to respect international maritime rules.”

The IRGC spokesman, Brigadier General Ramezan Sharif, said Saturday that the tanker was seized while it was sailing into the Strait of Hormuz through a wrong path.

He said that the UK-flagged tanker “was escorted by a British warship,” adding that the warship had tried to prevent IRGC forces from stopping the tanker, which had ignored warning calls to stop.

He said Stena Impero was detained upon a call by the Ports and Maritime Organization since its transponder was turned off and it risked an accident with other vessels.

The oil tanker has been taken to Bandar Abbas port for legal procedures.

Late on Friday, the British government advised UK ships “to stay out of” the Strait of Hormuz “for an interim period.”

British Foreign Secretary Jeremy Hunt has warned that there will be “serious consequences” if the situation is not resolved.

The seizure of the British tanker came more than two weeks after British Royal Marines in Gibraltar stormed the Iran-operated supertanker Grace 1 off the coast of Gibraltar on July 4, seizing the 300,000-tonne vessel on the accusation that it was carrying oil to Syria in possible violation of the European Union’s sanctions on the war-torn Arab country.

PressTV-UK detention of Iran tanker extended despite promisesGibraltar’s attorney general says the territory’s supreme court has ruled that an Iranian tanker illegally seized by by British troops can be detained for 30 more days.

Reports say the confiscation took place at the request of the US.

Tehran has condemned the seizure as “maritime piracy,” warning that it would not go unanswered. It has also dismissed British officials’ allegation that the vessel had been bound for Syria.