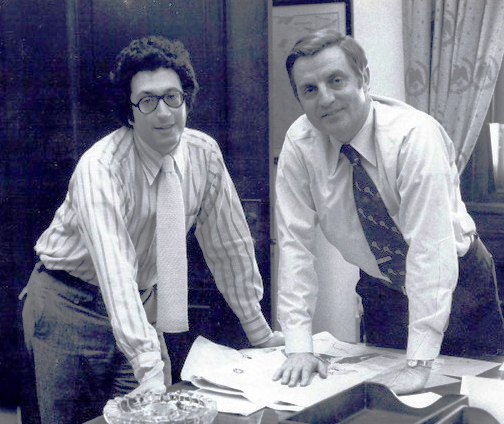 Harold Rosenthal, left, with Walter Mondale.”We even place within you a ‘guilt complex’ making you afraid to criticize Jewry openly.”

create the medium of exchange (currency, credit) in the form of a debt to themselves

when free governments could easily do this, debt-and-interest-free. Success in society

today depends on complicity in this massive fraud and the suicidal agenda it represents.

In 1976,  insider Harold Rosenthal revealed that this subversive agenda already extended to every aspect of Western life.

Entitled The Invisible Tyranny,  this shocking 17-page interview  ranks with the revelations of Benjamin Freedman, and C.G. Rakovsky as a reminder of the real dynamic directing world events: i.e. the expansion of the Cabalist credit monopoly to every corner of the world and every aspect of life, i.e. Communism.

The Protocols of Zion Updated

In 1976, the plan for “Jewish world domination” outlined in The Protocols of the Elders of Zion had been largely realized. Harold Wallace Rosenthal, 29, a personal assistant to New York Senator Jacob Javits felt that Jewish power was so unassailable that he could make some extra cash by telling this story to Walter White Jr., the editor of the Conservative monthly Western Front.

“Too many Jews do not have the guts to tell you how we live and plan, but I am not intimated by anything or anyone,” Rosenthal told White, left.

“It is too late for your Christian followers to put up a defence. That time is long past. Long, long ago we had to become the aggressors! That is undoubtedly one of our great purposes in life. We are aggressors!”

Entitled The Invisible Tyranny,  this shocking 17-page interview has been online for some time. It ranks with the revelations of Benjamin Freedman, and C.G. Rakovsky as a description of the real forces directing the world.

Rosenthal needed gambling money but his candor cost him his life. On Aug. 12, 1976, he was killed in a foiled skyjacking in Istanbul. Walter White concluded that the incident was a cover for Rosenthal’s murder.

A commemorative Rosenthal “Fellowship in International Relations” discreetly furthers the work he indiscreetly exposed. Oddly, there was no picture of Rosenthal on their web site until recently.

According to Wikipedia, he graduated from Cambridge University and Harvard Graduate School, both on scholarships. After working for Congressman Hugh Carey (D-NY) he moved to the office of Senator Walter Mondale (D-MN) where he directed his legislative agenda. After a stint at the Rockefeller Brothers Foundation, Harold returned to the Senate to work for Sen. Jacob Javits. He was definitely an “insider.”

Rosenthal says, “Most Jews do not like to admit it, but our god is Lucifer…and we are his chosen people. Lucifer is very much alive.”

This statement applies to modern culture as a whole. We do not like to admit that our “secular” society is based on a cosmic rebellion against God. Its true satanic character is becoming more evident every day.

Rosenthal says the “Jews” have built an earthly empire partly by rejecting Christ’s vision of a spiritual kingdom based on brotherly love. They wanted a warrior king not a Prince of Peace. “During Christ’s time, the Jews were seeking a material and earthly kingdom but Christ offered the Jews a spiritual kingdom. This, they couldn’t buy, so they rejected Jesus Christ and had him crucified.”

Jewish bankers plan to govern the world from Jerusalem according to their own interests. He says the Jewish religion is essentially a disguise for a racial imperative. “We can live among other people and states [by] persuading them that the Jews are not a distinct people but the representatives of a religious faith…”

“Jewish” power was achieved by gaining control of the monetary system. “We have been successful in dividing society against itself by pitting labor against management, This perhaps has been one of our greatest feats, since in reality it is a triangle, though only two points ever seem to occur. In modern industry… capital, which force we represent, is the apex. Both management and labor are on the base of this triangle. They continually stand opposed to each other and their attention is never directed to the head of their problem.”

“With this supposed capital we bring industry, management and labor into our debt, which debt only increases and is never liquidated. Through this continual increase, we are able to pit management against labor so they will never unite and attack us and usher in a debt-free industrial Utopia.”

Through control of banking, the “Jews” acquired a total monopoly of “the movie industry, the radio networks and the newly developing television media… we took over the publication of all school materials… Even your music! We censor the songs released for publication long before they reach the publishers… pretty soon we will have complete control of your thinking.” He says T V programs are carefully designed “to appeal to the sensuous emotions, never to the logical thinking mind. Because of this, the people are programmed to respond according to our dictates, not according to reason. ”

He says the “Jews” control Christian churches and use them to introduce ideas like racial equality. “No law is ever passed except its merits have previously been taught from the pulpits. An example of this is race equality which led to integration and ultimately to mongrelization. The gullible clergy in one breath instruct their parishioners that we are a special, chosen people while in another breath proclaim all races are the same. Their inconsistency is never discovered. So we Jews enjoy a special place in society while all other races are reduced to racial equality. It is for this reason that we authored the equality hoax, thereby reducing all to a lower level.”

He boasts that they control Americans using guilt. “Your people don’t have guts. We establish your thinking–we even place within you a ‘guilt complex’ making you afraid to criticize Jewry openly.”

“We Jews have put issue upon issue to the American people. Then we promote both sides of the issue as confusion reigns. With their eyes fixed on the issues, they fail to see who is behind every scene. We Jews toy with the American public as a cat toys with a mouse.”

Rosenthal avers that society can only escape this death clutch by violent action not education. “History has been written in blood, not with ink. No letter, editorial or book has ever rallied the people or stopped tyranny. We understand this principle and are forever propagandizing the people to write letters to the President, to Congress… Woe be unto us if they ever see the futility of it, lay down the pen and employ the sword.”

But Rosenthal is not worried. Alluding to the promotion of feminism and homosexuality, he says:

“We have castrated society through fear and intimidation. Its manhood exists only in combination with a feminine outward appearance. Being so neutered, the populace has become docile and easily ruled. As all geldings…their thoughts are not involved with the concerns of the future and their posterity, but only with the present and with the next meal.”

Rosenthal talks about how a “Jewish” invisible government also controls the U.S.S.R. “In Russia, there are two distinct governments one visible and the other invisible. The visible is made up of different nationalities, whereas the invisible is composed of AL L JEWS. The powerful Soviet Secret Police takes its orders from the invisible government. There are about six to seven million Communist in Soviet Russia, 50% are Jews and 50% are gentiles, but the gentiles are not trusted. The Communist Jews are united and trust each other, while the others spy on one another. About every five to six years the secret Jewish Board calls for the purge of the party and many are liquidated.

When asked “why”? he said: “Because they begin to understand too much about the Jewish secret government. Russian Communists have a Secret Group Order which consists of Jews only. They rule over everything pertaining to the visible government. It was this powerful organization that was responsible for the secret removal of the centre of Communism to Tel Aviv from where all instructions now originate.” He says Jews control the U N which is “nothing but a trap door to the Red World’s immense concentration camp.” He says this invisible power is responsible for the wars and revolutions of the last 200 years.

At times the interview seems almost too damning, and we wonder if it is authentic. Why would someone who aspires to national prominence tape such an interview? Couldn’t he be blackmailed? He makes many unflattering and untrue generalizations about Jews, which also seems implausible. At times, he veers widely from arrogance to insecurity. At one point, he says Jews have made plans to pack up and flee.

On Nov. 29 2005, I had a telephone conversation with pioneer researcher Des Griffin, author of The Fourth Reich of the Rich. Griffin told me that he was invited to Walter White’s house in California and listened to the tape of the interview. The Rosenthal character in the interview sounded like a bad actor reading from a script. Certain words were repeated. He says the information is totally credible but the conspiracy is real and does not need to be embellished by fraud.

I cannot account for this discrepancy. Ultimately, you will make up your own mind. The interview contains many insights only an insider could have, for e.g. the references to Lucifer, religion/race and violent change. I doubt if a Christian conservative like White would pull off the kind of stunt he condemns Jews for.

The tone of racial arrogance also rings true. Rosenthal expresses incredulity at the spinelessness and gullibility of the American people. He says a Jew remains a Jew whether he converts to another religion or not. In my mind, the truth is never a hoax.

By presenting this information, I am trying to inspire Jews and non-Jews alike to remove the media blindfold and recognize that Cabalists (Satanists) have hijacked humanity. Modern culture is largely a reflection of this fact. This is becoming more apparent every day.

True culture is based on religion, i.e. a collective commitment to spiritual ideals such as absolute justice, love, beauty and truth. “God is a Spirit and we worship him in Spirit and in Truth,” Christ said. (John 4:24)

We are living in the twilight of Christian culture. We have no genuine ideals to take its place. The elite’s Orwellian doublespeak (selectively applied “freedom”, “tolerance,” “diversity,” “human rights” and “equality”) is a tool of mind control and dispossession. But if we understand the Masonic Jewish matrix, we can escape its thrall.

See my four-part series on the Protocols

If Rosenthal’s interview is authentic, then I do not appreciate his speaking for all Jews. “Most Jews don’t like to admit it…..Lucifer”

How can you not like to admit something that you don’t know?

Jews get (falsely) taught that there is no devil or lucifer. How can you worship something that you don’t believe in?  Only people at elite levels

are initiated into open outward  Luciferianism . He is probably right about them, but he speaks arrogantly assuming that other Jews are of his ilk.

The truth is, the “lesser brethren” like me are told nice platitudes about God and Moses and that is what I chose to believe. The common people in Judea mostly accepted Christ gladly. Although Luciferianism has certainly co-opted Judaism, most Jews still don’t worship or even believe in lucifer