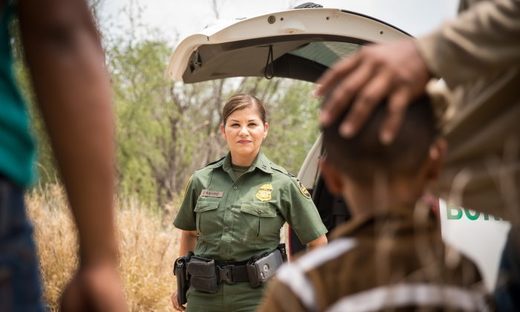 Children are being rented, bought, recycled, and kidnapped so that single adults, mostly men from Central America, can gain quick release into the United States after crossing the border illegally.

The cost of renting a child varies.

“We’ve had indications … that it could cost anywhere from a few hundred — or even in some cases, less than $100 — up to $1,000 or more,” said Kevin McAleenan, acting Secretary of the Department of Homeland Security (DHS), during a congressional hearing on July 18.

McAleenan said in one case, a 51-year-old illegal alien had purchased a 6-month-old baby for $80 in Guatemala so that he could easily get into the United States. The man, a Honduran national, confessed to border agents when he was faced with a DNA test.

“We’ve seen all manner of smuggling organizations communicating to potential customers and to those crossing the border how to bring a child with them to be allowed to stay in the United States,” McAleenan said. “They’ve been active in advertising, literally on Facebook and on the radio in Central America.”

Homeland Security Investigations, a division of ICE, sent 400 agents to El Paso and Rio Grande Valley, Texas, in mid-April to interview families that Border Patrol suspected were fake. In the last eight weeks, HSI special agents have identified 5,500 fraudulent families — about 15 percent of all cases referred.

McAleenan said agents have uncovered 921 fake documents and 615 individuals have been prosecuted for trafficking or smuggling a child.

“That tells me that we might be scratching the surface of this problem and the number of children being put at risk might be even higher,” he said.

“Everybody knows that if they bring a child, they’ll be allowed to stay in the United States — they call it a ‘passport for migration.’ I heard that directly from a gentleman from Huehuetenango, the western-most province of Guatemala.”

He said almost every summary of the cases he has seen mentions the same thing: ‘The subject stated that he made the attempt because he heard in his hometown that anyone traveling to the United States with a child will be released.”

The southern border has become so overwhelmed that most illegal aliens don’t even claim credible fear for asylum anymore, knowing they’ll still be released expeditiously into the United States — especially if they have a child.

Since Oct. 1, 2018, more than 300,000 children have crossed the southern border, according to McAleenan. Most of them entered as part of a family unit, but 67,000 also entered as unaccompanied minors. Family units increased by 469 percent from the first nine months of the 2018 fiscal year to the same period in the 2019 fiscal year.

The legal loophole that is fueling the sharp increase in family units was opened in 2015 by a California judge, who amended the Flores Settlement Agreement to prohibit the detention of families for more than 20 days. Previously, the 20-day rule was applied to unaccompanied minors only.

An immigration case cannot be adjudicated within 20 days, so families who cross the border illegally are now released by Border Patrol within days, with a future court date that most fail to honor.

One of the most telling statistics is that of men crossing the border with a child. In 2014, fewer than 1 percent of all men apprehended by Border Patrol in the Rio Grande Valley Sector had a child with them. That number now sits at 50 percent, according to Rodolfo Karisch, chief Border Patrol agent for that sector.

McAleenan said smugglers pair up adults and children. “If they have an individual who wants to go to the United States and someone else has a child that they might want to make some additional money renting [out], or they want the child delivered to a relative in the United States,” they’ll buy fake documents and then get smuggled to the border.

“The vulnerabilities in our legal framework [are] incentivizing smugglers and families to put children at risk. The recycling problem is maybe the worst manifestation of that,” he said. Recycling refers to when a child is used by an adult to get across the border easily as a “family unit,” then the child is sent back to be used again.

“ICE now has three significant cases, multiple cities around the country, where they’ve identified a small group of children — say five to eight children — who are being used by dozens of adults to cross our border seeking release into the United States.”

The adults involved in fraudulent family claims are prosecuted by the Department of Justice for federal crimes including: immigration crime, identity and benefit fraud, alien smuggling, human trafficking, and child exploitation.

McAleenan said Congress could make the biggest impact — “not only on the flow, but on protecting children” — by making a change to the Flores agreement.

He said that prior to the 2015 change to Flores, the Obama administration started detaining families together for the duration of their immigration case, which takes around 45 days. The flow of illegal immigrants reduced in response, as those with meritless asylum claims were deported.

“If people are not successful in coming with a child being released, they’re actually getting a decision from an immigration judge resulting in repatriation for the vast majority, that would mean others would not try to come,” McAleenan said.

Although almost 90 percent of those who claim credible fear when presenting themselves at the border pass the initial screening, less than 20 percent are granted asylum relief by an immigration judge. For Central Americans, that number is less than 10 percent.

Rep. Katie Hill (D-Calif.) told McAleenan at the hearing that a Democrat-controlled House will not amend the Flores agreement, nor will it provide funding for more detention beds.

McAleenan pushed back, saying he’s not ready to accept that a system that worked under the Obama administration five years ago would not be accepted by Congress today. He said back then families were kept together for 40 to 50 days in a campus-like setting with education, recreation, medical care, and courtrooms on site.

“We’re not seeing successful results in immigration cases when anyone is released from being detained in custody, but especially for families — they’re more likely to cut off their [tracking] bracelets; they’re less likely to show up for hearings; they’re less likely to respond to a final order of removal,” McAleenan said. “So being able to address that at the border in an expedited and fair way with due process is a much better solution than what we’re doing now.”

He said he’s already discussing bipartisan options with the Senate Judiciary Committee, but he’d like to start a discussion in the House.

McAleenan is also concerned about the increased number of unaccompanied minors coming across the border and the legal loopholes that prevent them from being sent back home.

The Trafficking Victims Protection Reauthorization Act (TVPRA) has been established for years to help victims of trafficking; however, a loophole prevents the United States from returning children back to their home countries unless they are from Canada or Mexico (contiguous countries).

McAleenan said even if Central American countries want their children back, U.S. law prohibits it.

“We’ve had all three ambassadors from the Northern Triangle countries assert that those governments should have some say in what happens to that unaccompanied child,” he said.

Instead, an unaccompanied child gets moved from Border Patrol to Health and Human Services (HHS), which then finds a sponsor in the United States to place the child with.

Currently, around 11,000 unaccompanied minors are in the care of HHS, creating a proxy foster care system. The vast majority (88 percent) hail from the Central American countries of Guatemala, Honduras, and El Salvador. Most are aged between 15 and 17.

“The number of unaccompanied minors entering the United States during this fiscal year has risen to levels we have never before seen,” said Jonathan Hayes, before the House Judiciary Committee on July 25. Hayes is responsible for the unaccompanied minor program within the HHS’s Office and Refugee Resettlement department.

McAleenan said it’s often a parent, who is already in the United States illegally, who pays a smuggler to deliver their child up to the border.

New restrictions, placed by Congress in the latest round of appropriations, include a provision that illegal aliens in a household with an unaccompanied minor are now exempt from deportation.

Charlotte Cuthbertson is a senior Washington reporter with The Epoch Times who covers the White House as well as immigration and the opioid crisis. Follow Charlotte on Twitter: @charlottecuthbo