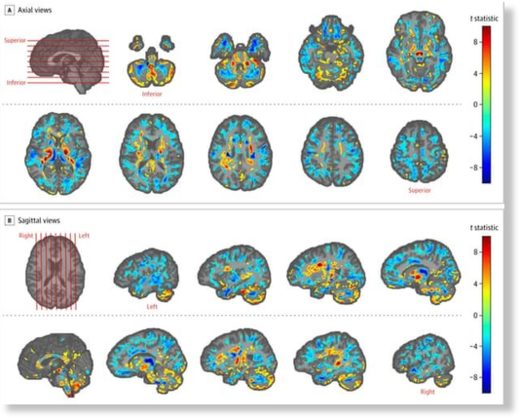 Brain scans of US embassy staff who became ill in mysterious circumstances while serving in Cuba have found potential abnormalities that may be related to their symptoms.

The scans taken from 40 US government workers who suffered strange concussion-like symptoms during their deployment to Havana revealed that particular brain features looked different to those in healthy volunteers.

Images of the diplomats’ brains found that on average they had lower volumes of white matter, the tissue made from nerve bundles that send messages around the brain. They also showed micro-structural differences and other changes that could affect auditory and visuospatial processing, doctors said.

But the medical team that performed the scans said the findings were not conclusive. They do not match what is normally seen in brain injuries and the severity of symptoms did not vary with the extent of the brain differences spotted.

“It’s a unique presentation that we have not seen before,” said Ragini Verma, a professor of biomedical imaging on the team at the University of Pennsylvania. “What caused it? I’m completely unequipped to answer that.”

Independent experts agreed the findings were inconclusive and said it was still unclear whether the diplomats were victims of any attack or had suffered related brain injuries. The apparent abnormalities might have pre-dated the attacks, they said, and could have more mundane explanations such as anxiety or depression. One said the study did not meet the usual standards for publication.

Dozens of staff at the US embassy in Havana were treated for a range of medical complaints from headaches, dizziness and problems with sleep to difficulties in concentration, balance, vision and hearing in a wave of illness that struck staff and their families between late 2016 and May 2018.

Many described falling ill in their homes or hotels after hearing penetrating noises described variously as grinding, cicada-like chirps or the buffeting caused by an open window in a car, prompting speculation that the diplomats were victims of an acoustic attack.

While the US government withdrew half of its Havana staff, issued a travel warning and expelled more than a dozen Cubans over the incident, the sonic weapon theory was largely discredited when the FBI found no evidence for such an attack and scientists matched an audio recording of the offending sound to the call of the Indies short-tailed cricket. The prospect of another type of mystery weapon has not been discounted, however.

The brain scan study follows on from medical tests that the University of Pennsylvania doctors published last year. Those tests concluded that the US staff had suffered concussion-like brain damage, but the findings were heavily criticised by neurologists and other brain specialists who described major flaws in the work.

For the latest study, published in the Journal of the American Medical Association, doctors compared brain scans taken from the US employees after they fell ill with scans from two control groups of healthy individuals. The US embassy staff had less white matter, on average, with 542cc compared with 569cc in the controls. They also had evidence of lowered connectivity in brain subnetworks that process sound and vision.

Further scans looked for problems at the microscopic level. When the brain is injured and nerve cells die, the damage can show up in scanners that measure how water diffuses around the brain. More damage tends to increase diffusivity, because there is less nerve structure penning the water in. It also reduces the tendency for water to flow in particular directions, a measure called fractional anisotropy, because the nerve fibres that normally channel the flow have deteriorated.

Here the results were baffling. The diplomats’ brains showed the opposite of what is seen with brain damage. Instead of rising, diffusivity fell in a region called the vermis, which handles visual and auditory signals. And instead of falling, fractional anisotropy in the region rose. Verma suspects the results are due to a drop in water content in the diplomats’ brains, but admits this is speculation. “For now all we can say is that something happened and these people should be followed up with more imaging,” she said.

Prof Paul Matthews, head of brain sciences at Imperial College London, was not impressed with the work and pointed at a number of important shortcomings. “This paper would not meet usual standards for publication, particularly in a high-profile journal, were it not for the topicality of the findings,” he said.

“The differences are small, they do not correspond to known patterns of brain injury and could not be shown to have changed in the people before and after the exposure,” Matthews said. “There is little that one can conclude from what is presented: does it suggest that the people who were susceptible to the symptoms were more likely to have brains with these characteristics from the start or was there some unknown – and difficult to conceive – effect of the ‘directional phenomenon’ that changed their brains? The mystery remains unsolved.”

Heidi Johansen-Berg, the director of the Wellcome Centre for Integrative Neuroimaging at Oxford University, said the differences in the patients’ brains were not clear cut. It was impossible to say whether they were linked to a particular event, the precise pattern of changes was difficult to explain and it was not clear if or how they related to the patients’ symptoms, she said. “This is an important study given how little is known about the exposure that these individuals might have experienced. However, the uniqueness of the exposure and the population make it impossible to gain clear answers on whether the potential exposure resulted in brain change,” she said.

Prof Ray Dolan, the director of the Wellcome Trust Centre for Neuroimaging at University College London, was similarly cautious. “Given what we know about functional specialisation in the brain one would expect meaningful relationships between the severity of specific deficits and the degree of change in brain regions that mediate specific functions. For example, if there were subjects with severe memory impairment one might expect a relationship with changes in the hippocampus. The report is silent on this,” he said. “I would take the findings with a pinch of salt.”

Dr David Silbersweig, the chairman of psychiatry at Brigham & Women’s Hospital in Boston, said one problem was that the scans were taken for medical reasons rather than research, where the data would be higher quality. “A next study with research scans rather than clinical scans, and with some additional controls, is something that would be helpful as a next step to continue to try to get to the bottom of this.”