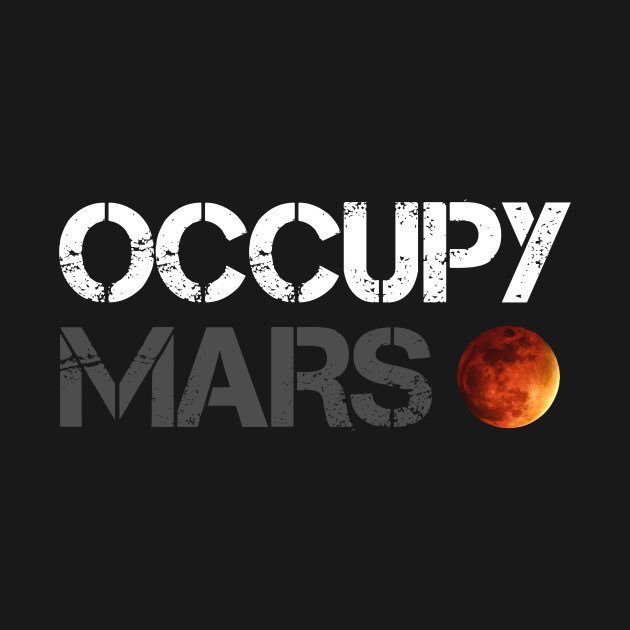 Imagine being the real-life Tony Stark: A billionaire, jetsetting tech whiz playboy who’s developing the multi-billion dollar rockets that will not only privatize space travel but help get humanity to Mars. And imagine you announce the whole thing on Twitter with a big, splashy “Occupy Mars” picture of the red planet . . .

Only to be told that you posted a picture of the moon by mistake. A red-hued “blood” moon, to be sure, but the moon nonetheless.

Luckily, the cool billionaire tech guru who’s selling electric cars and building underground hyperloops and rescuing Thai children from caves (and selling Not A Flamethrowers to raise some money on the side) took it exactly how you’d expect he would: By tweeting a couple of laugh-crying emojis and a hearty “Moon too!”

What class. But then again, would you expect anything less from the man that Werner von Braun predicted would be the future leader of Mars? Of course not.

What many may have missed in the back-and-forth about the moon/Mars gaffe, however is another tweet he made about the scheme. Granted, this one is not quite so exciting to the general reader: “Accelerating Starship development to build the Martian Technocracy.”

Sadly, no. In fact, what Musk’s supporters might not know is that he has a very real family connection to the actual, historical Technocracy, Inc. movement/political party. which might help explain Musk7s outlook, his rise to prominence, and some of his wackier (not to mention creepier) ideas on the eventual merging of humans and machines.

For the three or four people out there who have never heard of Elon Musk before, the bullet points:

That’s where the story becomes more familiar. As I elaborated in my article on The Brain Chip Cometh two years ago:

Having made his first $22 million with the sale of his “Zip2” web software company in February 1999, Musk launched X.com, one of the first online financial service companies, the following month. X.com then merged with its main competitor, Confinity, which had a money transfer service called PayPal. Musk served as CEO of the PayPal conglomerate until 2000 and remained its largest shareholder until it was bought out by eBay in 2002 for a cool $1.5 billion. Musk pocketed $165 million from the deal.

As MarketSlant noted in their exposé of Musk’s three-way government-sponsored arbitrage scheme last fall: “Elon Musk now has 2 companies that do not make money [Tesla and SolarCity]. He has 1 that makes money from prepayments for services yet to be given [SpaceX]. All are financed by the US taxpayer at ridiculously below market rates. The table is now set for financing using inflated currency (sound familiar?) in the form of Tesla stock to get real cash in Mr. Musk’s pockets.”

More recently Musk has become known for his . . . shall we say, “eccentricities.” Like when he called British diver Vernon Unsworth — who helped in the Thai cave rescue of 2018, and who dismissed Musk’s hamhanded attempts to help in the rescue as a “PR stunt” — a “pedo guy.” Or when he (falsely) tweeted that he was taking Tesla private and had “funding secured.” Or when he started selling flamethrowers to fund one of his business ventures, but renamed it “Not A Flamethrower” to help insure it would sail through customs without being confiscated. Or when he smoked marijuana on the Joe Rogan podcast (with 6% of Tesla’s share value evaporating in one puff of smoke).

To his fans, all of this merely adds to his mystique. He’s just a fun, unpredictable guy who knows how to generate publicity and make money.

However, as even his fans are forced to admit, this does mean he oversells and underdelivers on every project he ever announces: Production of actual working Teslas is consistentlyshort of expectations and whistleblowers have revealed that the production process itself is a hot mess; his grand vision of a futuristic “NY-DC in 29 mins.” hyperloopquickly devolved into a normal car tunnel; his “private” space exploration company is the recipient of billions of dollars of taxpayer money; his tiny contribution to Tesla’s $2.8 billion capital raise this year (which came after Musk’s insistence that Tesla would not be raising any more capital) shows that he’s either not confident in his own product or too far in debt to make a significant investment.

But to his supporters, these failures are just signs that Musk’s genius is constantly pushing him beyond the boundaries of current technology. His detractors have a simpler explanation: He’s a conman.

But if he were only a conman, that would be one thing. The problem is he’s much worse than that. As I also noted in my brain chip article: “[Musk is] like Beelzebub, popping up every time the worlds of government funding, military research and Bilderberg technocrats collide.”

When our good friends at DARPA hold a Robotic Challenge, Musk is there.

When the World Government Summit convenes, Musk is the star attraction.

Need someone to pimp transhumanism? Musk is only too happy to explain the potential dangers of AI, and to present his solution: We must merge with the machines so that we’re not “irrelevant” when the robots take over. (And, oh yeah, he happens to have a company that’s working on the first “neural lace” mind-machine merger technology).

Yes, wherever the globalist fat cats meet to discuss technocratic ideas for the future, it’s a safe bet that Musk will be within spitting distance. But the part of this story you may not know is that Musk’s technocratic proclivity is not just a happenstance of character; it’s in his genes. You see, Elon Musk is the grandson of Joshua Haldeman.

Never heard of Joshua Haldeman? He may not be remembered today, but he was a notable figure in his day. An American by birth, Haldeman moved to southwest Saskatchewan in 1906 at the age of four. During his eventful time in the Canadian prairies, Haldeman helped found the province’s first chiropractic association, he “waged a public health campaign against Coca-Cola,” and, depending on whether you trust the Canadian Chiropractic Association or The Financial Times, he was either the “research director” or the “party leader” of the Canadian branch of the Technocracy Party (or maybe both?).

As I’ve discussed on The Corbett Report many times now, technocracy was a social movement/philosophy/political ideology seeking to construct a system of “scientific” control over society. In the technocrats’ vision — which gained widespread traction with the public in America and Canada in the 1930s — the world would be divided into regional units called “technates” which would be run by “technocrats” (scientists, engineers, economists and others with specialized knowledge of specific technical fields). According to this ideology, economic — and thus societal and even geopolitical — turmoil could be eliminated if the technocrats were given control of the economy and all its aspects, from manufacturing to retailing to the currency itself.

The idea was ludicrous. The type of technology that would have been required to properly administer this technocracy — technology for monitoring every industrial process, every product and every transaction in the economy in real time — simply did not exist when the idea was first conceived. But that didn’t stop the technocrats, or the visionary leader of what became Technocracy, Inc., a fully-fledged movement/political party/cult complete with a uniform (a “well-tailored double-breasted suit, gray shirt, and blue necktie, with a monad insignia on the lapel”) and a mandate to salute the movement’s leader on sight. As viewers of Why Big Oil Conquered the World will know, that leader — Howard Scott — was a charlatan, and he was quickly disgraced when it was discovered he had “padded his resume” and falsely claimed engineering credentials which he did not possess. But while the technocracy movement might have been set back by the fall from grace of its charismatic leader, the idea itself never fully went away.

The Canadian branch of the party, meanwhile, gained enough attention to be banned in Canada, where, it was feared, this subversive organization of revolutionaries were conspiring to overthrow the government. This caused the disillusioned Haldeman to give up on Canada altogether. He packed up his things and moved his family to South Africa, which is where his grandson, Elon Musk, was born.

This connection is not just tangential. It tells us something about Musk’s roots and his vision. And it tells us that when he says he is preparing “to build the Martian Technocracy” he is not using that word in a careless way. He knows exactly what it means.

As The Financial Times notes: “Maybe technocracy will finally have its day, appropriately enough, on Mars.”

Let’s hope not. But first we have to convince Musk’s supporters why the creation of a technocracy is a bad idea. Good thing there’s a handy dandy documentary on that very subject that you can show them for free!