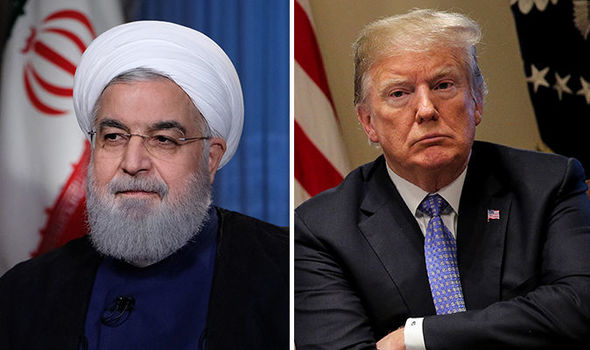 Yesterday the news agencies Associated Press and Reuters mistranslated a speech by Iran’s President Hassan Rouhani. They made it sound as if Rouhani insulted U.S. President Donald Trump as ‘mentally retarded’. Rouhani never said that.

The agencies previously made a similar ‘mistake’.

A 2005 speech by then President of Iran Mahmoud Ahmedinejad was famously misquoted. Israel should be wiped off map, says Iran’s president headlined the Guardian at that time. Others used similar headlines. The New York Times wrote:

The statement was used by the G.W. Bush administration and others to whip up hostility against Iran:

Ever since he spoke at an anti-Zionism conference in Tehran last October, President Mahmoud Ahmadinejad of Iran has been known for one statement above all. As translated by news agencies at the time, it was that Israel “should be wiped off the map.” Iran’s nuclear program and sponsorship of militant Muslim groups are rarely mentioned without reference to the infamous map remark.

Here, for example, is R. Nicholas Burns, the under secretary of state for political affairs, recently: “Given the radical nature of Iran under Ahmadinejad and its stated wish to wipe Israel off the map of the world, it is entirely unconvincing that we could or should live with a nuclear Iran.”

However Ahmedinejad never used those words:

“Ahmadinejad did not say he was going to wipe Israel off the map because no such idiom exists in Persian,” remarked Juan Cole, a Middle East specialist at the University of Michigan and critic of American policy who has argued that the Iranian president was misquoted. “He did say he hoped its regime, i.e., a Jewish-Zionist state occupying Jerusalem, would collapse.” Since Iran has not “attacked another country aggressively for over a century,” he said in an e-mail exchange, “I smell the whiff of war propaganda.”

Jonathan Steele, a columnist for the left-leaning Guardian newspaper in London, recently laid out the case this way: “The Iranian president was quoting an ancient statement by Iran’s first Islamist leader, the late Ayatollah Khomeini, that ‘this regime occupying Jerusalem must vanish from the page of time,’ just as the Shah’s regime in Iran had vanished. He was not making a military threat. He was calling for an end to the occupation of Jerusalem at some point in the future. The ‘page of time’ phrase suggests he did not expect it to happen soon.”

Despite the above and other explanations the false “wipe Israel off the map” translation never died. Years later it still reappeared in Guardian pieces which required it to issuemultiple corrections and clarifications.

Now, as the Trump administration is pushing for war on Iran, a similar mistranslation miraculously happened. It were again ‘western’ news agencies who lightened the fire:

Farsi speakers pointed out that the Rouhani never used the Farsi word for “retarded”:

A lot of Western media is reporting that Iranian President Rouhani called Trump “mentally retarded.” This is inaccurate.
Regarding Trump, he just said “no wise person would take such an action [the new sanctions imposed].”

Absolutely incorrect. There is a word for “retarded” in Persian & Rouhani didn’t use it. Prior to him saying “mental disability” he even prefaced his comment by saying “mental weakness.” Those who speak Persian can listen & judge for themselves. Here is a video clip of Rouhani’s comment: link

But the damage was already done:

Iran leadership doesn’t understand the words “nice” or “compassion,” they never have. Sadly, the thing they do understand is Strength and Power, and the USA is by far the most powerful Military Force in the world, with 1.5 Trillion Dollars invested over the last two years alone..

….The wonderful Iranian people are suffering, and for no reason at all. Their leadership spends all of its money on Terror, and little on anything else. The U.S. has not forgotten Iran’s use of IED’s & EFP’s (bombs), which killed 2000 Americans, and wounded many more…

….Iran’s very ignorant and insulting statement, put out today, only shows that they do not understand reality. Any attack by Iran on anything American will be met with great and overwhelming force. In some areas, overwhelming will mean obliteration. No more John Kerry & Obama!

Reuters, which also peddled the mistranslation, gleefully connected the dots: