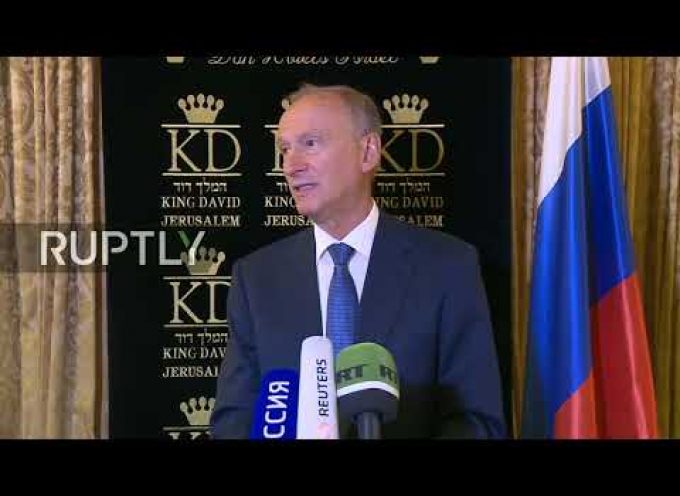 Nikolai Platonovich Patrushev, former FSB Director and current Secretary of the Russian Security Council, angered Israel with his speech after the trilateral summit in Israel.

The RT, Russia Today, a federally funded content generator initially posted a video of Patrushev speaking AFTER the meeting with his American and Talmudic counterparts, as the RT should do considering that the RT is officially broadcasting from the Russian national interests.

But this is not how Margarita Simonyan sees the news giant that she was appointed to run by one of the founders that she was familiar with as a young woman. While employing a slew of Soros operatives, Simonyan uses the Russia Today to establish the control over the government of Russia. One of her tricks? To censor Russian government officials.

After a couple of hours, the RT removed the Secretary of the Russian Security Council speech and his answers to the questions of journalists, one of whom was, ironically, was the journalist from the RT.

You can see for yourself, the RT never reposted this very important speech reflecting the official position of Russia’s government.

Here is the video and my translation and transcript of Patrushev’s speech.

Good afternoon. We have concluded the first trilateral meeting on the level of Secretaries of Councils of Defense of Russia, Israel, and the United States on the settlement issue. Russia has once again reconfirmed her adherence to the principles of the territorial integrity and unity of the Syrian Arab republic, as well as the goals and principles of the UN charter. We have expressed our standpoint that the Syrian conflict doesn’t have a military solution. And we have reaffirmed our support to only Syrian own and Syria-lead political process facilitated by the UN according to the Resolution of 22.54 of the UN Security Council. We have underlined the need for the international community to support Russia and our partners in facilitation the political processes of stabilization inside Syria including the creation of the Constitutional Committee as soon as possible, following by the development of the highest law of the country.

We have emphasized an importance of easing of the tensions for the country (Syria) between Israel and Iran, by the way of implementation the mutual approaching steps. We have made an emphasis that Syria must not be turned into an arena for geopolitical confrontation. We have also highlighted the need for the international community to help Syria to rebuild its national economy. Among other things, Syria should be free of illegal trade restrictions, unilateral sanctions, as well as sanctions on economic operators that help Syria to rebuild. They also have to be free from all sanctions.

We also turned everyone’s attention to the relations of Syria and other Arab states that should be normalized again. Syria is once again should be a full-fledge member of the Arab League. Also, we pointed out an importance of establishing the contacts of Syrian government with its Kurdish ethnic minority. We stated of importance to unite the efforts to eliminate all remaining in Syria terrorists. We called for immediate disruption of all channels through which terrorists might be able to obtain weapon grade chemical materials and their precursors.

Russia, the United State and Israel should join their efforts to help peace to return to Syria.

In the context of the statements made by our partners with regard to a major regional power, namely Iran, I would like to say the following: Iran has always been and remains our ally and partner, with which we are consistently developing relations both on bilateral basis and within multilateral formats,

This is why we believe that it is inadmissible to describe Iran as the major threat to the regional security and, moreover, to put it on par with the Islamic State or any other terrorist organization, Especially, since Iran contributes substantial efforts to bring peace to Syria and to stabilize the situation in Syria.

We have called on our partners to show restraint and readiness for reciprocal steps, which must serve as the basis for the consistent advancement towards the easing of tensions in the Israeli-Iranian relations,

In conclusion of our meeting we expressed our gratitude to our host, the prime minister Benjamin Netanyahu, and to Israel’s authorities for their warm welcome.

Q.: Concerning Iran. You have discussed of the shooting down the US drone. How do you access this situation with relations with Iran?

A.: We have not discussed this situation with our partners. All I know comes from the briefing of the Russia’s Ministry of Defense that the UAV was in Iran’s airspace. This is the information I have. There was no other evidence presented to us.

Q. Russia Today: On June 13th, there was an attack on two oil tankers in the Gulf of Oman. The US resorted to another round of “highly likely,” blaming Iran. What kind of way Russia sees here?

A.: First and foremost, an objective investigation should take place. Evidence presented so far are not allowed to make any decisions. Some say that it was a torpedo attack. Th experts say that there is no evidence of any torpedo attack against these tankers. Some other say that it was a job of underwater swimmers of some special NAVY forces. Again, there is no evidence to support this claim. Because the methods and the techniques would be completely different in case professionals would be involved. The damages caused to these tankers don’t support this assessment. We don’t see that. As for the damages that they are trying to show us so far they say that it was absolutely unprofessional, and what they try to demonstrate to us is absolutely without quality.

That’s why I want to go back to the beginning of my statement that we need to have an objective investigation. We should not assign blame, but to get to the bottom of this issue.

Q.: Do you agree that Israel delivers air-strikes against Iranian targets in Syria, while you are trying to stabilize the Assad government?

A.: We had discussed that we need more effective cooperation between Russia’s Ministry of Deference and Israel. As you know, many of the air-strikes could have been prevented. That is the way to alleviate Israel’s concerns. We need to alleviate these concerns by non-military means.

Other instances of outrages RT démarche against Russia’s national interests?

A scenario for Drug Enforcement setup was written in 2016

Margarita Simonyan and the “Black Towers of Kremlin”