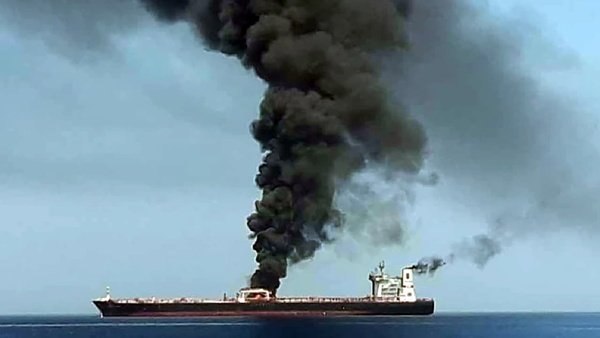 A Japanese ship operator has dismissed the US CENTCOM’s claim that the oil tanker operated by Japan, which caught fire in the Sea of Oman on Thursday morning, was damaged by a limpet mine linked to Iranian elements.

Yutaka Katada, the president of Kokuka Sangyo, said on Friday his sailors on board the Kokuka Courageous saw “flying objects” just before the attack, suggesting the tanker wasn’t damaged by mines.

“The crew told us something came flying at the ship, and they found a hole,” he told a press conference in Tokyo.

“Then some crew witnessed the second shot,” he noted.

This disputes the allegations raised by the US military, which released a video it said showed an Iranian navy boat removing an unexploded mine attached to the hull of the Japanese-owned tanker Kokura Courageous attacked in the Gulf of Oman.

In the video, a smaller boat is shown coming up to the side of the Japanese-owned tanker. An individual stands up on the bow of the boat and can be seen removing an object from the tanker’s hull.

The US claimed that the object was likely an unexploded mine.

It also provided a Powerpoint slide that it claimed showed “damage from an explosion and a likely limpet mine on the hull of the civilian vessel M/V Kokuka Courageous.”

The video was released a few hours after the administration of US President Donald Trump blamed Iran for the attacks without providing evidence.

The anti-Iran claims come as Iranian rescuers were the first to rush to the assistance of the two oil tankers after they sent a distress call, transferring all of their 44 crew members to Iran’s southern shores.

The Front Altair oil tanker, moving Ethanol from Qatar to Taiwan with the flag of Marshal Islands, caught fire at 8:05 local time on Thursday, 25 miles from Iran’s Jask Port.