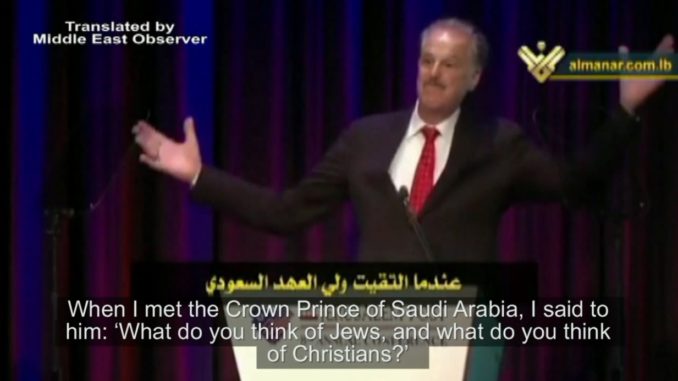 Following his meeting with bin Salman, Evans is convinced that bin Salman is more supportive of Israel than “a lot of Jews”. Quoting bin Salman, Evans also says the Saudi Crown Prince told him that he ‘likes’ Jews and was in fact raised by one as a child.

Saudi Arabia and the Emirates are at the forefront of those supporting the Zionist entity. To the extent that they are boasting about it all the time, and at various forums and meetings, such as in a meeting with Mike Evans, the founder of the Friends of Zion Heritage Center.

During the Eighth Annual Conference of The Jerusalem Post in New York, Evans quoted both Saudi and Abu Dhabi crown princes as saying that they support the enemy entity (Israel) more than some Jews, and that Palestinians must copy Zionists.

‘I said what are you talking about?’

‘My father’s house director’, he said, ‘who raised me, was an Ethiopian Jew Evangelical’.

Wow! Now I can tell you this in two and a half hours, the stuff that I heard from the (Saudi) Crown Prince was so astonishing…absolutely would blow your mind if you know what this man is thinking. One statement he said: I said what can the Palestinians do, and he said ‘Oh it’s simple, they need to copy Israel! Copy Israel that’s all!’”.

These declarations come at a time when the United States is preparing to announce the so-called “Deal of the Century” at a conference to be hosted in Manama later this month. The conference is fully funded and supported by certain Gulf States, on top of which is Bahrain, Saudi Arabia and the Emirates. This summit represents the clearest public acknowledgement yet of these states’ relations with the occupation entity (Israel). This comes after media reports revealed American-backed efforts of (Gulf) state rulers, notably Saudi Crown Prince Mohammed bin Salman, to strengthen and promote ties with the enemy (Israel).