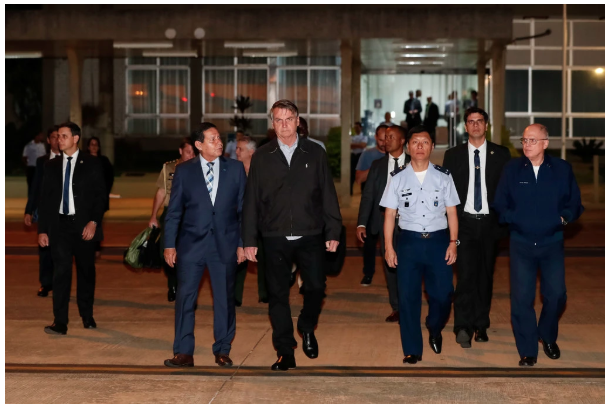 A Brazilian Air Force pilot, who was one of the crew members on their way to serve as the advance guard for Brazil president Bolsonaro during the forthcoming G20 summit in Osaka, was arrested during a stopover in Seville en route to Japan after Spanish customs officers discovered enough cocaine on him in to fuel a small Wall Street bank’s party for a month in what has become an international embarrassment for Jair Bolsonaro, Brazil’s “Trump” and also the country’s self-professed law-and-order president.

The 38-year-old airman appeared in court on Wednesday on charges of drug trafficking after Spanish officials discovered 37 packets of cocaine weighing a total of 39 kilos in baggage and officers from Spain’s Guardia Civil took the crew member into custody, a police spokesman in Seville said, adding that “the whole bag was filled with drugs” according to the FT.

The airman had arrived in Spain on Tuesday afternoon in the airplane coming from Brazil, which later in the day departed for Japan with the rest of the crew on board.

Bolsonaro, a former army captain hoping to preempt a major scandal, said on social media late on Tuesday that he “immediately ordered the defence minister to co-operate with the Spanish police to establish the facts and co-operate with every stage of the investigation”.

He added: “There are around 300,000 men and women in the armed forces who are trained to uphold the highest principles of ethics and morality. If the airman is found to have committed a crime, he will be tried and convicted according to the law.” Brazil’s defense ministry echoed the president in a statement, saying that the “facts are being assessed”.

The arrest is, no pun intended, a major blow for the rightwing Bolsonaro, whose government is trying to toughen drug laws amid a major crackdown on illegal activity, and who frequently praises Brazil’s armed forces.  The drug bust also comes as the president’s son, Eduardo, who heads the foreign affairs committee in Brazil’s congress, has criticized the “narco-dictatorship” of Nicolás Maduro in neighbouring Venezuela for allegedly trafficking drugs in its own air force planes.

And, as BuzzFeed likes to say, you will never guess what happened next…

The embarrassing arrest also occurred on the day that embattled Brazilian justice minister and former judge Sérgio Moro was in the US visiting the Drug Enforcement Agency.

Brazil has become a key transit route for cocaine produced in Andean countries and smuggled to west Africa and Europe, and security forces are embroiled in a violent struggle against drugs gangs in Rio de Janeiro and several other coastal cities.

Meanwhile, as the FT notes, Spain has long been one of Europe’s main entry point for drugs. In February, the Guardia Civil stopped a ship carrying 3,300kg of cocaine in a police operation against drug trafficking by sea from South America.