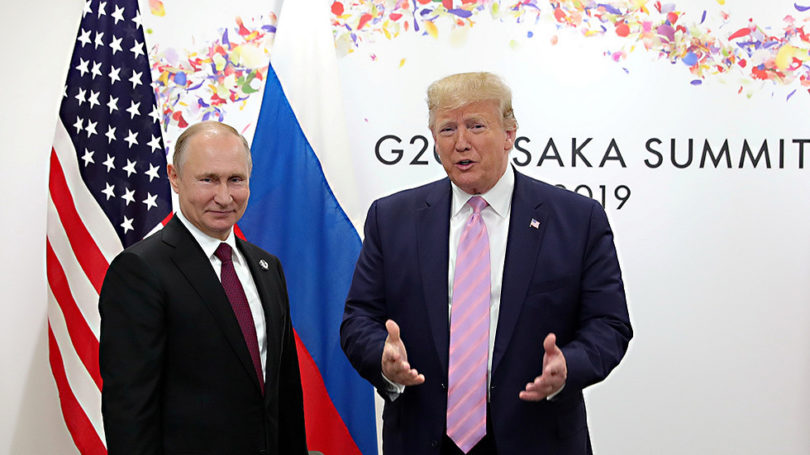 Donald Trump and Vladimir Putin had a full agenda when they met on the sidelines of the G20 Summit in Osaka. But the serious nature of their meeting did not stop the two leaders from enjoying several lighthearted moments together.

The US president was considerably more talkative than his Russian counterpart as the pair delivered brief remarks for the media before beginning their closed-door meeting on Friday.

Trump said that trade, disarmament and “a little protectionism” would be the primary topics of discussion. He predicted that “positive things” would result from his “very, very good relationship” with Putin.
“We’re going to discuss a lot of different things,” he added.

For his part, the Russian leader noted that there was certainly “something to discuss,” but didn’t go into specifics. Initially planned for just one hour, their meeting went twenty minutes overschedule.

Despite the dilapidated state of US-Russia relations, Trump did his best to lighten the mood. Before sitting down with Putin, he was spotted patting the Russian president’s back as world leaders gathered for a group photograph.

When the pair appeared before the press, Trump joked about the throng of overzealous photographers in the room.
“It’s like the Academy Awards. Stupid,” Trump quipped to Putin.

But Trump had more zingers up his sleeve. As he waited to begin his meeting with the Russian president, a reporter shouted out: “Mr. President, will you tell Russia not to meddle in the 2020 elections?”

While Washington and the Kremlin have remained tight-lipped about the meeting’s outcome, Trump and Putin seem to be making headway – at least on a personal level.

According to the Kremlin, Trump “reacted positively” after Putin invited him to Moscow next year to attend commemorations marking the 75th anniversary of victory in WWII.